Maybe I Celebrated A Wee Bit Too Early

At 6:00 in the morning I drove over to the new skunk homeland to find the trap empty.  YAY!  It finally left and a big surprise to me, did NOT attempt to make the trap his home.  Probably because it smelled bad.  Something must have scared him because I could smell skunk more than before.  Not bad, but enough to know it was a skunk.

I wore old clothing and rubber gloves.  I wrapped the trap up and placed it on another tarp in the back of my truck.  No use taking any chances, even if the entire thing is already wrapped.

Just for giggles, I had set up my game camera that night, knowing I wouldn't see him any more, a fact I intended to gloat over.  I laughed because, well,  HAHA I caught him.  Now all I will see is kitties, the house cat kind, right? 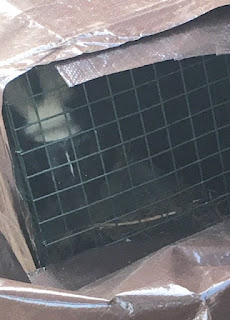 I had eight videos of that same orange kitty cat going back and forth.  He even stuck his entire head in the other smaller trap, but didn't get caught.

The next video SHOCKED me!!!   NOOOOOOOOOOOOOO!  Okay, so I KNEW there would be more than one skunk.  OMG I HAVE TO DO THIS ALL OVER AGAIN!!!  I'm not sure my heart can stand the stress.

There's a loose board way down the fence line and apparently he or she came in that way.  Watch it smelling the ground ... probably looking for the baby I caught.  I'm only thinking baby because it appears to be much smaller than this one.  BIG SIGH.

I watched the next video with slumping shoulders and more big sighs.  Obviously I have my work cut out for me.  This is how it's been coming in and escaping all this time.  Big diggers these guys .. who knew?

Although rather disappointed that my trial is not over, I'm still just as determined to rid my property of this menace.  I did some more investigation to find their territory is rather large ... two miles is about the max.  The second piece of good news is the new skunk homeland is two miles away with an irrigation canal between it and me.

More Bad News:  The males will roam over THREE miles.  Anyone want to do a tail check and tell me whether I have a male or female??

SO ... I reset the trap, repairing the tarp where it had pulled 6 inches of it through the one inch holes in the bottom wire.  That little bugger was STRONG to be able to do that.  In the meantime, I'm shopping for another piece of property further away.  The problem being I have to leave the trap 24 hours before I can pick it up.

I shouldn't worry ... who the heck is going to steal a skunk trap that smells like skunk??   The saga continues.  I reset the trap and game camera last night.  We shall see what happens.

Posted by Nancy Kissack at 4:27 AM