It's been rather chilly around here in the mornings.  30-32 degrees, meaning there's no more outside morning coffee and I have to chip the ice from my kitchen faucet.  I've been heating my house a tad in the mornings with the fireplace.  Yes it's cold ... put on a coat.  I'm too cheap to pay that ridiculous PG&E bill. 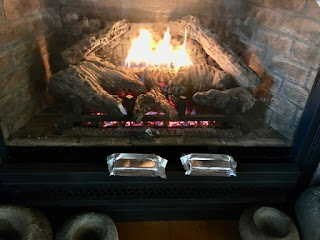 Why do I need cream cheese?  The non-bakers can skip on down the page if you like, but this is the best pumpkin "pie" I've ever had.  I included the recipe, it's that good. 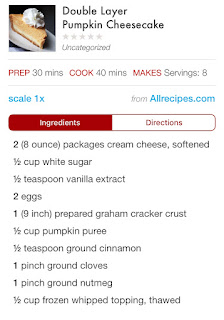 Here's the secret to the best graham cracker crust I've ever made.  Use 2/3 graham crackers and 1/3 gingersnap cookies.  It was just a fluke because I didn't have enough crackers.  What a world of difference that made in the taste. 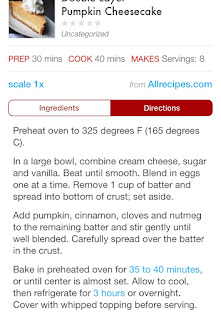 Press it into a deep dish pie plate.  Here's where I went a little off the track.  It says to take one cup of filling and place it in the bottom first (the white layer), then mix in the pumpkin and spices with what's left for the top layer.  One cup was not enough.  My bottom later was pretty skimpy. 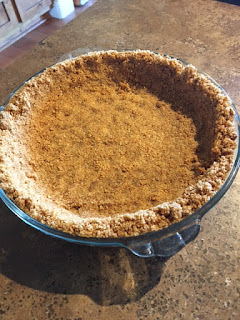 I baked it in my Breville oven for 40 minutes.  Does this not look wonderful?  Here's the best part, it didn't deflate like most of the pies I've cooked over the years. 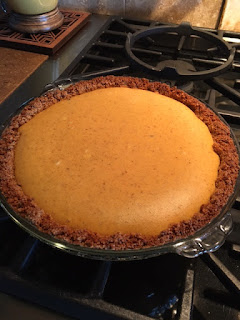 Now comes the BEST PART!!!  You take an entire tub of Cool Whip.  No, you can't see that part in the recipe.  I stole it from ANOTHER recipe for a similar pie.  Cool the pie in the fridge for at least three hours before dumping the ENTIRE tub of cool whip onto the pie.  Make it pretty.

For demonstration purposes, I just lobbed on a huge scoop.  It takes me a week to eat this much pie and the cool whip would become yucky.  It doesn't last you know ... cool whip needs to be eaten up rather fast, thus the HUGE glob of white on this and every piece I've eaten so far.  I wouldn't want that cool whip to go bad.  I would take this over pumpkin pie any day of the week!! 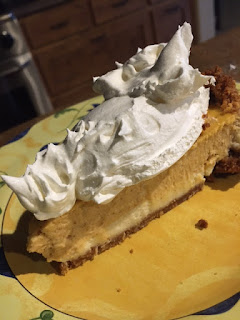 About the time it came out of the oven, that dreaded BEEP noise began.  Beep ......... Beep ....... scaring the puppies into a panic.  I don't know what it is about that sound.  I drug the ladder out of the garage and went in search of the ghosty.

I finally found it in the living room ... one I didn't even know existed.  It took some work to get the battery out, but amazingly, it's one I have not changed since I moved in here ten years ago.  How could that be?  I guess they don't make batteries like they used to. 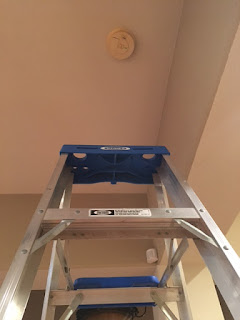 On the way back to the garage, I found another problem.  One of my outside lights has actually fallen to the ground.  The socket is still hanging, but everything else was on the concrete.  I tried a quick fix, but being perched on top of a 10 foot ladder trying to force the cover over the socket wasn't working at all.  How in the world did it ever come out of the cover?

With no place to tie a rope to ensure I didn't fall off, I let it go for now.  I guess a trip to Home Depot is in order.

Lastly .... you knew this was coming.  After four days, I took a quick trip out to the back fence to see if any wayward skunks had returned.  Well OF COURSE they had.  There were four huge fresh holes dug and the one I covered up was now a freeway. 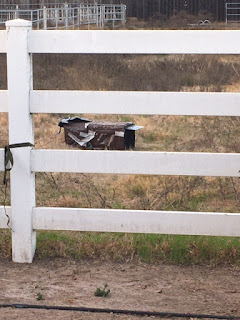 The trap has again been set.  Big sigh.  I'm feeling rather defeated!!  Maybe another big piece of pie will help.

Posted by Nancy Kissack at 4:33 AM