I've invented many new words for the English language dictionary in the last few days.  Too bad I can't repeat any of them here.  I'm sure I would be thrown off the network.  The moon on the breast of the new fallen snow ..... no, that's not right .... the frost on the breast of the newly mown lawn, made it look like it had snowed the night before.  It was a chilly 30 degrees. 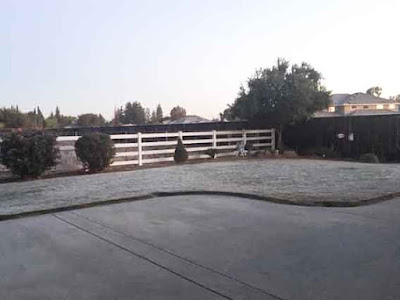 I checked the skunk trap, only to find the gourmet tuna I placed there was still intact.  Time for a new strategy.  KILL KILL KILL!!!!

But first, I called AAA to get my truck towed to my local repair shop.  After fifteen minutes answering questions their computer system asked ...  can't I just have a live person ... I received four emails telling me they would be there in 18 minutes.

Ten minutes later, two more text messages told me they would arrive in FOUR minutes.  Yahoo!!  That didn't last long however because the next one I received said 25 minutes.  What??

At long last he arrived ... nice guy ... with one of those slide-ramp trucks.  I of course had to have a quick lesson in how it worked, since I just seem to gravitate to machinery.  My truck was loaded up and I followed him to the repair shop.  The diagnosis was dead batteries -- dead like I wish those skunks were.

With that done, I headed off on my second quest, to find a bigger piece of fabric so I could start on that quilt.  It was like being in Candyland.  Rooms full of bright colors and gorgeous patterns.  I came home with two pieces of brown.

I don't know what happened, because after that second stop light, my Jeep turned in to Taco Bell.  Just like Cooper ... SQUIRREL!! ... the picture of a grilled cheese burrito called my name.  When I unwrapped my new prize, it was not at all what I expected.  They just threw some cheese on the grill and put the burrito on top while it melted.

What a greasy mess that was ... but I have to say it tasted pretty darn good.  The best part was not feeling ANY after affects of Taco Bell. 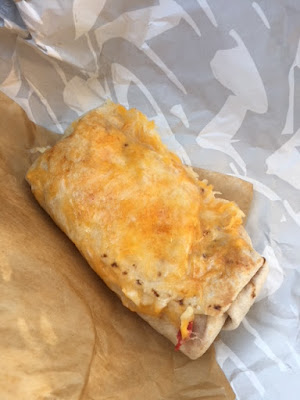 Once home, I went to work on the skunk problem, yet again.  As you can see, I covered up the first hole, so he just dug around it.  I happened to run into my neighbor (whose property the skunk goes through to get to MINE) and she said her research showed you could just get a garbage can, dump some food in the bottom and set a board up the side.  The skunk falls in and VOILA ... skunk jail!! 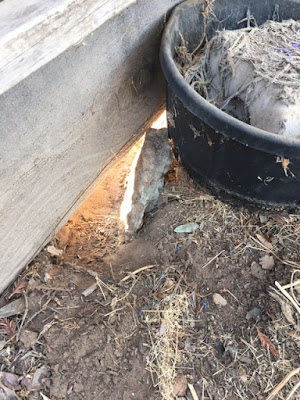 To be honest, I had my doubts, but lets just give it a try for shitz and giggles!!  I formulated my plan.

This picture, taken at 4:00 this morning, gives you some idea of what I did.  I was laughing the entire time because I just KNOW there are two little sections INSIDE the can that a skunk could grab on to and crawl out.

I carefully laid out a chunk of gourmet canned cat food on each cross piece of the "ladder".  I put some on a back ledge inside the can and some on the bottom.  Just behind this is the skunk trap on the ground which I also filled with cheap (but gourmet) greasy tuna.  How can people eat this crap??  I removed the catch piece to let him get used to it before actually setting the trap. 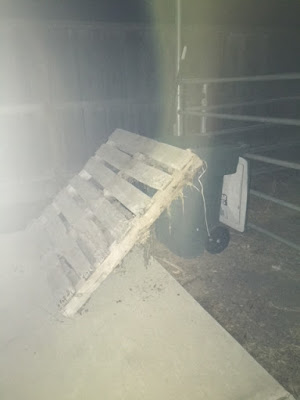 I also set up my game camera right in front of this hole.  I truly can't wait to see what THAT shows.  This morning with my flashlight, I checked out the garbage can trap.  OH LOOK!!  Every little piece of cat food was eaten.  Maybe I caught him?  I gingerly looked over the edge.

I knew it wouldn't be there and it was NOT.  It had eaten every single tiny morsel of food I put out in the bottom of the can and crawled out!!   My first thought was to use a bigger can ... maybe my recycle bin.  Apparently this skunk has superior climbing skills!!  I never thought it would climb the "ladder" in the first place.

Then, to add insult to injury, he dug an ever BIGGER hole with much force to get out.  I'm sure that's because he ate so dang much he couldn't FIT through the FIRST hole he dug.  THIS hole is HUGE!!! 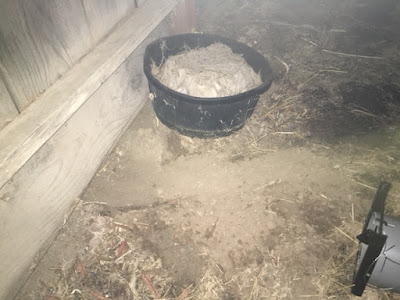 So Nancy still has a BIG FAT ZERO, but a hard-headed never-give-up attitude. I'm going to the feed store today to see if I can get a bigger trap and of course another can of cat food.  Stubborn?  You betcha!!

In the meantime, I also called a tree service to completely clean up the back fence line, just to make sure there are no skunk dens amid the brush.  I AM GOING TO WIN THIS WAR!!!  That skunk is DEAD MEAT!!!!!