Just the thought of dealing with another skunk gives me the heebie jeebies.  I was so excited about the first one, but so apprehensive about the second.  Yes it's a big one!!!  I'm pretty sure that's Mama.  The very first encounter that sprayed Jessie was probably one of two smaller babies.

With my triumph not lasting long at all, I decided to whip up something to drown my sorrows.  There's nothing like pumpkin cheesecake to do just that.  Smother it in whipped cream and it's even better.  It took my mind off that skunk completely for all of five minutes until it disappeared.

The recipe is an easy one ... google Cheesecake Factory Copy Cat Recipe.  Fitting, don't you think?  Cat as in civvy cat? 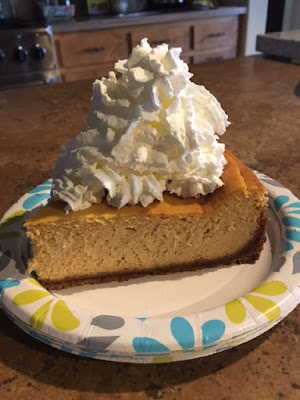 With my sweet tooth satisfied, I gathered up all my hutzpah and headed out to the trap to see what I might have captured THIS time.  Nothing .... nada.  The door had not been sprung.  I brought in the camera to take a look.

Kitty kitty came back, eight times.  I think maybe he's a little wiser.  He walked all around the traps and snatched little pieces of food here and there, but didn't get caught.  The skunk never appeared in any of the twelve videos captured.

Another piece of cheesecake, much smaller this time (honest) made up for not even SEEING the skunk.  Not that I want to.  It would make me happy if she just moved right on past this neighborhood.

With nothing to do, twiddling my thumbs finally got boring and I set off to Save Mart for groceries.  I was interested in turkeys for Thanksgiving and one to cook for Cooper's dinners.  He loves turkey.

Although word got out that toilet paper was again in short supply since Target had run out completely, Save Mart had rows and rows of it.  We have three options here ... Walmart, Target and Save Mart.  Worst, worser (yes that's a word) and ok for groceries.  I grabbed a twelve pack since I knew I was running low.

Next up, turkey.  Although I would love to have the FRESH one at $5.99 a pound (that comes to $71 for a lousy turkey, which basically would become dog food in my house) I chose to pass.  The next choice was breast only, which I would love because I never eat any of the other stuff anyway.  $45.00 for that one.  I kid you not.  As you can see, the price of food has skyrocketed. 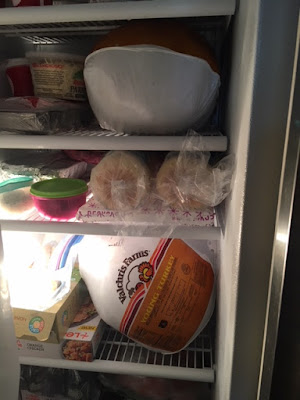 I know you are on pins and needles about what I might have trapped last night.  I am too, since my foray out to the skunk hunting grounds found the trap door to be SHUT.  I hear no scratching and digging, so I rather imagine I caught kitty again.

To be honest, I'm not all that anxious to go find out.  I'm not sure my nerves can take another skunk relocation.

Posted by Nancy Kissack at 5:03 AM