I decided some time ago I wasn't going to load up on souvenirs, chatchkees or anything else that takes up room and has to be moved.  Quilting stuff is exempt, as demonstrated by my packed cupboards in the rig.

When we arrived, Barbara and Tom Westerfield suggested I hit up the Chamber of Commerce immediately for this coin.  I passed.  It was later I remembered two people I thought would love a coin.  You already know what happened ... they were sold out.  RATS!!  There was a mad dash to the train depot that was also sold out.

Wasn't I surprised when Mel Roberts called while I was in Salt Lake City and said he found the guy who made the original order for the Sheriff's Department.  YES!!  Upon my return, I picked up ten of these beauties in case any one else wanted one.  They had about 980 left over. 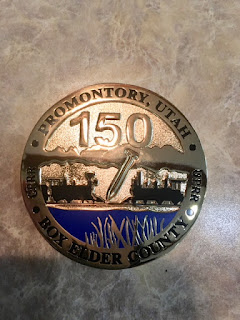 Are they not gorgeous?  The back gives the exact time and telegraph wording, along with the dates.  I think I still have seven left if anyone wants one.  $10 each, compared to the Chamber price of $15. 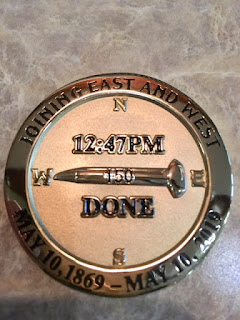 That's when they hit me with the belt buckle.  The Sheriff had these belt buckles made for the celebration also.  The gold version is numbered ... only 150 in existence.  My self control went right out the window.  You can't wave a huge gold buckle in front of a cowgirl without fireworks going off.  I refuse to tell you how much THIS cost me!! 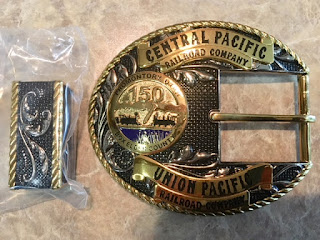 When I went to the Post Office to mail out the first two coins, I was surprised to see these stamps on the counter.  I declined until I saw them in person.  They were exquisite and I had them stamped with the date and place of Promontory Utah.  Also only $10. 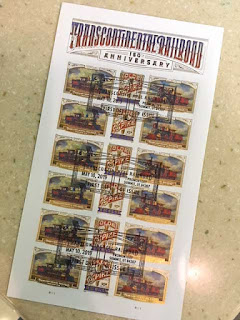 On a side note, those of the Golden Spike Group who were supposed to go to the Heber Valley Railroad rally, you will be happy to hear that my contribution to the breakfast casserole brunch was a big bomb.  Do NOT buy these.  I ate one this morning and they are horrible!!!  Unfortunately for me, I have 11 more to eat. 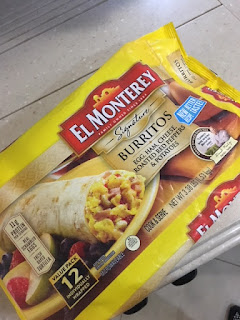 This was my morning drive yesterday, which is why I'm still camped out in Sparks.  Later in the morning, it did clear up a bit, but I was paid for the night.

Too bad I'm not a better gambler, I could have saved lots of money on reservations!!  The weather looked like it would finally be clear Friday, so I talked them into giving me a spot until then.  Naturally, you have to pay up front with NO refunds for leaving early. 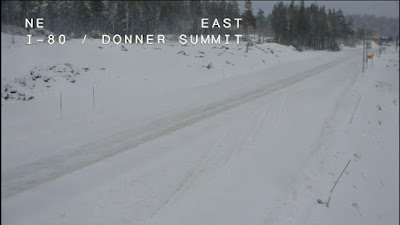 So I lost my butt on that gamble.  It has cleared up and I should be good to leave about 11:00 this morning.  Ding ding ding ... you lose!!!   I've checked every single camera on I80 from San Francisco to Utah, along with weather radar in every single town along the way.  I'm thorough, if nothing else, mostly because I'm scared to drive this rig in the snow.

Thank you all for replying about AT&T.  At least I know it wasn't just me ... I appreciate your support, and thank you for the no-snow prayers.  It seems to have worked, even if my wallet is considerably lighter!!!!