Why six months?  Because I get TWO a year.  One on my Facebook day and one on the real day.  I'm not saying that word because it might make the time go faster when I'm trying to make it slow down.

I can tell I'm getting older because my parts are falling off.  There should be a clip-on piece at the bottom of this mirror arm.  It covers up all the wiring inside.  Woe was me yesterday when I was inspecting the water and snow damage to find it completely missing.

I have a feeling there won't be any replacement of this 2012 model piece of fake chrome.  I'll call Tiffin and see what I can come up with. 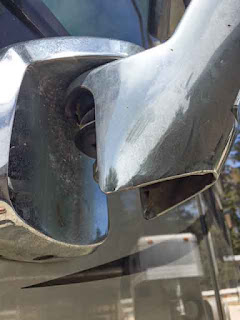 Another discovery, I have a drawer in the dash by the passenger seat that pulls out into a computer table.  Cool, right?  It has those funny sliding rail things at the side.  Wasn't I surprised when I took off from a stop sign and the desk slammed OPEN!

The only way I could keep it closed was to tape it shut with scotch tape.  If any one has any idea how to adjust those slide thingies so they stay closed, I would greatly appreciate the help.

I made a quick trip to the Elks Park to dump the tanks, so that lovely task has been completed.  I did another walk around to be sure nothing else was going to fall off before parking her for the next 30 days, at which time I'll be taking off again.

The rest of the day I spent finishing up this quilt for the Elks Steak At The Lake donation.  It's going to be raffled off as a fundraiser. 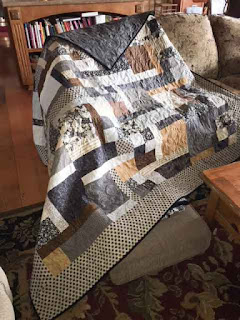 In the meantime, my friend from the Sacramento area came down for a goodbye visit.  Sadly her little puppy Rusty who never leaves her side, has developed a terrible tumor.  It's so sad when we lose our "children" to something so awful.  My heart goes out to Rusty and his Mom.

I did spend an hour or two trying to figure out what a Golden Spike President does without much success.  Apparently there is something called Google Groups that I need to set up so notices can be sent to everyone.  From there, I'll just play it by ear and hope they don't notice.  As for the plaque that goes on the back of my rig, the plastic bars to hold it in place cost $10 ... the shipping $11.   Guess there won't be any plaque on MY rig!!

There's no special plans for today.  I'll be finishing up another Donation Quilt and hoping the on-and-off rain will wash most of the crud off the rig so I don't have to.

Posted by Nancy Kissack at 5:51 AM