I thought it might be a day of rest, the first one since sometime in April.  Too bad my to-do list kept getting longer and longer every passing minute.

What's for breakfast?  Salad, since there doesn't seem to be anything else in the fridge at the moment. Groceries are number 3 on my list.  Wasn't I surprised to find that huge lettuce core in the middle.  I'm sure it weighs in at a pound or so, meaning there's enough salad for two small bowls.  I thought about calling the company, but it's not worth the hassle.  It really was pretty tasty for breakfast. 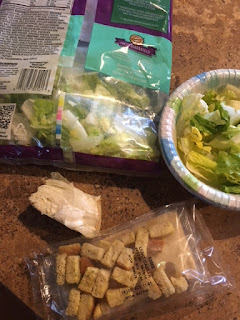 Next I spent an hour on the phone discussing my Arizona homeowners insurance, trying to get the value reduced.  They had it at $25,000 more than I paid and tacked on $90,000 for contents.  Are you kidding me?  I've got one couch, one chair, one bed and a sewing machine worth more than all of them put together, STILL not over $20,000.

She explained the outbuildings (including the garage) and the contents are a percentage of the value, no matter what you really have.  I finally got her to lower the value to the purchase price, creating a HUGE reduction in the bill of $6.00.  Now you know why I hate dealing with all this insurance stuff.  It's a lose lose situation.

Instead, I decided I would occupy myself with replacing the stinky air filters.  A quick run to Home Depot reminded me I spent way too much on quilt fabric.  It was quite a shock to find each filter averaged $16 and I purchased SIX.  At least I will save on fuel the next three times I need to change them out.

I feel like Spiderman perched on top of the eight foot ladder, gripping the walls with my fingers and the ladder with my toes!! 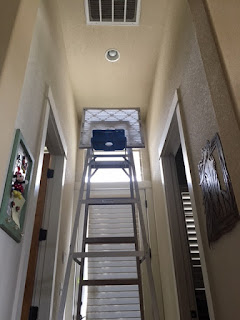 After another salad lunch (finishing the bag) I headed off to the quilter to pick up this donation to the Elks.  It's not one of my favorite patterns, but it was quick and easy.  It will take me about three days to hand sew the binding.  Remind me to never use black.  It's VERY difficult to see where the needle is going, even in the light of day.  I've lost count of the number of bandaids I've had to use. 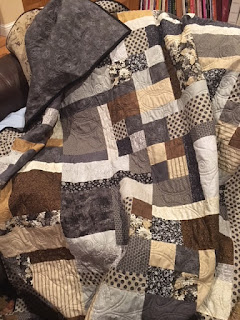 It seemed I was on a roll with terrible food, so why mess it up?  I've been cutting out all bread, potatoes and pasta.  Some time ago I ran across a recipe for chinese fried rice made with cauliflower.  It was pretty good, so I proceeded to try it again.

I figured Cooper could share a little of his cooked chicken, so I threw that in with onions, peas, mushrooms and carrots, and of course the cauliflower.  It's the sauce part that went South.  I couldn't find the original recipe, so I used another.

It turned out a soggy tasteless mess.  Unfortunately, I now have enough to feed a family of eight!! 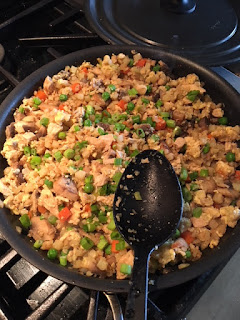 I never did get down the list to "dump the tanks", so that will be first on today's menu.  It's been raining on and off, which suits me just fine.  That means no sprinklers on the lawn (and thus no big PGE bill), no air conditioning required and no kids playing in the swimming pool next door.

There is however, one very large, very loud peacock.  I've no idea where HE came from!!  It's okay though, he reminds me of being on the ranch back in the old days when we had a flock of pea hens as guard dogs.  Any time anyone came around, they raised a big ruckus so we knew something was afoot.