Bet you never expected to read THAT headline.  You just never know what you are going to find when out on the trail.  I have to say I actually do have a tiny bit of experience in that area.  Many moons ago we rode Harleys long and hard across country to meet up with Highway Patrolmen, Sheriff Deputies, Hells Angels, and Gypsy Jokers.

I also have a kind of radar for the weird and wonderful (maybe I'm just paranoid), especially since I'm usually out there alone taking pictures.  On this day however, Patti Painter and I decided to play hooky from the train yard and check out all the murals in town.

They represent every ethnic background of the people who worked the mines here.  The entrepreneurs cut down all the trees and burned them in kilns like this to supply charcoal to the railroad.  Over 30 trains a day came through the yard here, two trips each, not counting the passenger trains. 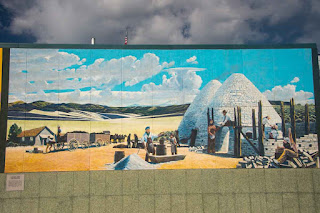 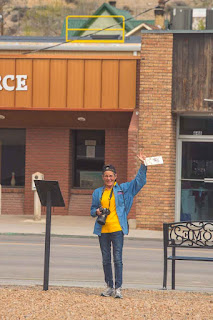 There was lots of interesting information about the 30 or so murals, all of which I've completely forgot.  Just before this barber shop were two biker guys hanging out at the corner of a building.  They made a comment when we walked by which I didn't quite hear.  I said "morning" and walked a little faster. 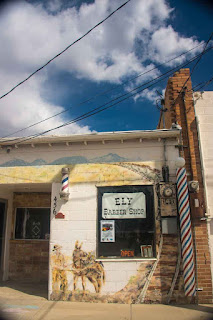 Just a bit further down at the Convention Center, a very large group of bikers were gathering.  We thought they were veterans, heading to the Ride For The Wall.  We were wrong.  I took a quick blurry picture as we were walking about half a block away on the other side of the street.  In a flash, we were confronted by a rather huge guy who said they do not allow ANYONE to take pictures of them.  Uh oh. 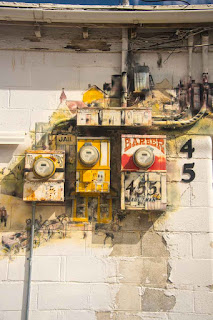 If you happen to be looking for the girls, we found them along our walk. 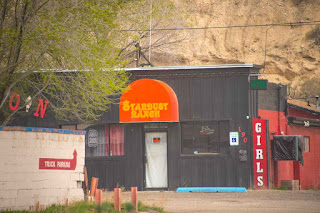 He said they never allow pictures of their PATCHES, either.  Okay ... I smiled, gripping my camera, trying to figure out WHY.   "Actually, I only took a picture of your bikes".  After a couple more warnings, we were allowed to walk away, cameras intact.  Aren't these murals just fabulous?  It was hard to pay much attention to them the rest of the morning. 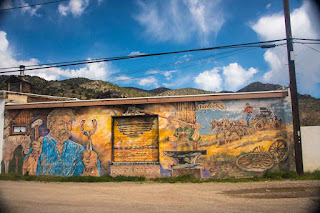 As we walked around the corner, who should we run in to but the first two guys who had gone around the OTHER way to intercept us.  I don't think Patti noticed the hair stand up on the back of my neck.  Look ... there's a mural Patti, as we quickly cut across the street. 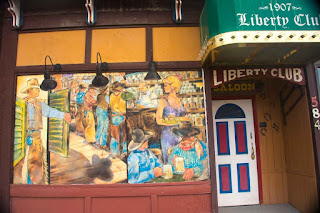 Just because I was now curious, when we got back after our steam train ride, which I will show you tomorrow, I jumped on the internet to find out just who they were.  As I said, it's a burry picture.  It was hard to manipulate the pixels to even make out the name on the patch. 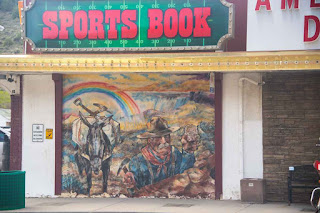 It was P.O.B.O.B.  Many of you have probably heard of the motorcycle group who invaded and basically held a town hostage for four days.  It happened in 1947.  There was a movie about it starring Marlon Brando.  That was this group of guys, along with the Booze Fighters and Market Street Commandos from San Francisco.  Several days later, they did it again in another town.

Obviously this is not those exact guys, although many looked old enough, but the new breed of the Pissed Off Bastards Of Bloomington (Southern California).  Who would have thought? 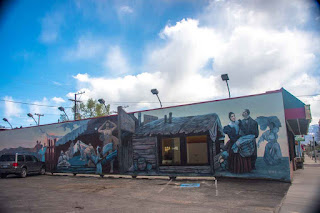 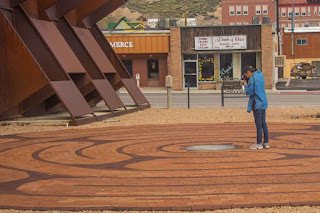 As I scanned the image I took, I noticed several sentries standing around the outside edge of the group, keeping watch for dummies like me taking pictures.  All of them were looking directly at my camera. 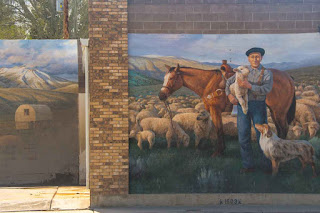 Seems to me they were pretty proud standing out there in public, displaying their patch jackets.  So why shouldn't I take a picture?  On the other hand I do want to live a little longer, so I'm not going to post it now.  Maybe a few months down the road!

Early this morning I'm off for Ogden, once I find the information on the RV park.  I know it's around here somewhere!!