You Say Ebelskiver, I say Aebleskiver

Aebleskivers (pronounced e-bull-ski-vers) are the Scandinavian equivalent to donuts ... sort of.  I had never heard of it until I signed up for this Yankee Hill Winery cooking class.  To be truthful, I've enjoyed these so much, I didn't care WHAT they cooked.

Chef Ron runs a tight ship and rules the Roost, like any good Chef worth his salt.  When he says quiet, you can hear a pin drop. 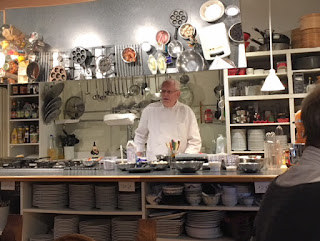 At 80 years of age, he hasn't slowed down one bit.  At his direction, we made up the batters, then he demonstrated the cooking techniques.  This one is unique, to be sure.  I always wondered what those crazy cast iron skillets with the round holes were for. 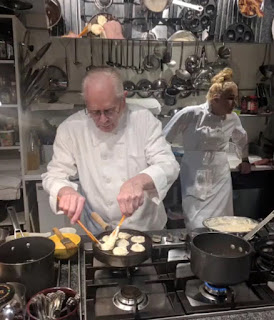 Ebelskivers are for that lazy Sunday morning with your family in the kitchen.  Why?  Because you have to whip the egg whites until stiff and fold them in to the batter.  That all takes a little time.  Then you drop about a quarter cup into each buttered hole in the already hot pan.

Almost immediately, he grabbed a fondue fork (another reason to take that fondue box off the top shelf), stuck it in the batter and lightly turned it one quarter turn.  Yikes!!!  I thought he was going to have a big mess on his hands ... that batter was raw as could be!! 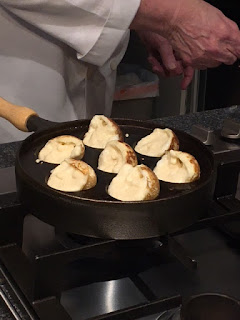 Another 30 seconds went by and he turned them again.  This is where it got interesting.  We chopped up ham and cooked bacon, placing a little bit onto each ebelskiver, right into the raw dough.  Apparently the Swedish like jam because they put teaspoons of the sweet stuff in each one instead of bacon or ham. 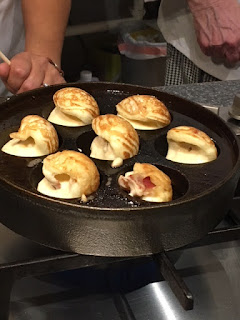 Turn and turn again, for about three minutes.  Are they done?  You test them by sticking a stick ... or the fondue fork ... right into the middle.  If it comes out clean, they are ready. 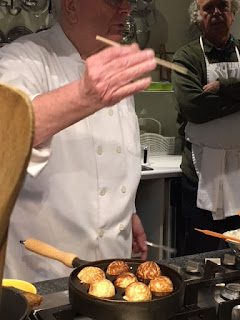 He then handed the bowl and tools to me, saying he already knew how to do it.  I look so serious, right?  That's because the pan was getting too hot and they were starting to burn.  OH NO!!!  I kept turning them faster and faster as I tried to turn the stove down.  Of course I shut the burner off completely.  Not once, but TWICE.  I never said I was good in the kitchen. 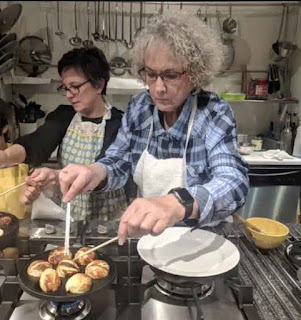 Don't they look delicious??  As soon as they were on the plate, they disappeared. 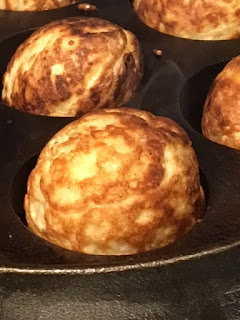 The plain ones are usually served with powdered sugar and jam.  The Scandinavians sure do like their powdered sugar.  The savory bacon and ham ones we made were served just like eggs benedict. 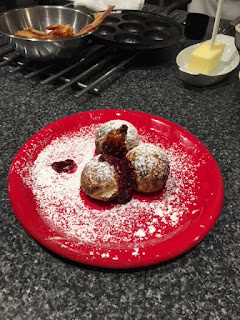 That means you need sauce.  Hollandaise sauce to be exact, something I have never tried to make.  There's WAY too much whipping involved for me to do that.  But WAIT!!  You can make it in your blender.

I hope you like butter.  Chef Ron's motto is the more butter, the better.  Well this recipe has a LOT!  Blend one egg, one tablespoon of lemon juice and a teaspoon of Dijon mustard (or more if you want).

Once very smooth, start pouring in TWO CUPS of melted butter, VERY slowly, trying all the while not to make a big mess and get butter all over the floor and counter, like Chef Ron did.  I'm glad it wasn't me.

Instead of poached eggs, they fry one over easy, place three bacon ebelskivers on top and cover in sauce.  That plate disappeared in less then 3 seconds.  Oh my gosh it was good!!

In the interest of time, I'll finish this up tomorrow, as we made three types of waffles, super simple Swedish pancakes, homemade Maple syrup and a mushroom sauce to die for.  It was three hours of Sunday morning brunch!

On the way up, I spent 40 minutes walking Columbia looking for photo ops.  I actually found Santa Claus, but he wouldn't let me take a picture.  I got the rooster instead, but that too is for another day.