It's A Little Crowded Around Here

Yesterday brought an emergency trip to the Doctor's Office.  Not for me (happily) but sadly for my little Cooper.  My poor baby has had an ear problem for a couple of days.  Living on a ranch, we learned to doctor everything from horses to nuts, the nuts being us kids of course.

I imagine you can guess the Vets office is NOT Cooper's favorite place to go.  I have to drag him kicking and screaming.  Unfortunately the techs are not quite as compassionate as I am.  They shaved his ear, pulled out all the hair (omg I just can't imagine how great THAT felt!!) and doused it with medicine.

Now that we have tortured him, you can take him home.  Don't put anything in his ear for a month.

I have to mention here that the Vet is Dr. Christine McFadden.  The name may be familiar to you.  I've been seeing her ever since she got out of Vet School and opened her little business on the South side of town.

That was when I was in to raising exotic birds.  Parrots, cockatoos, macaws ... and the only Vet was in San Diego.  I drove down there many times with sick birds.  Christine was a money saver for me when she specialized in exotic animals.

She is the one that kept Jonathan alive through two long bouts of pneumonia-like illness where I had to give him shots in the belly, twice a day.  It took months for him to get over it both times, but amazingly, he's still alive and squawking disco, kitty kitty kitty!

You might be able to google the rest of her story, a tragedy like no other involving her children. 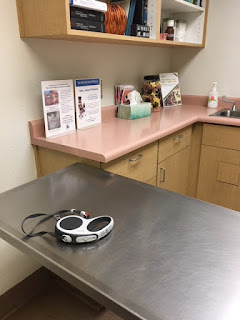 The good thing about the trip to the Vet is that I bought a bag of treats, made in the USA of course, that distracted Cooper on the way home.  He has such an expressive face, it just kills me.  Once on the couch, he shook his head constantly until lots of snuggles put him to sleep. 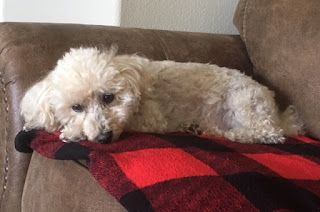 I'm presently sitting on the front two inches of my little office chair with Cooper cuddled in my lap.  Behind me, also on my LITTLE office chair is Jessie.  If Cooper gets to sit in my lap, she gets to sit behind me.  It's a little crowded around here this morning.

One place it WASN'T crowded was at the Elks Lodge last night ... Lawyer's night.  I guess it's because no one likes lawyers, right?  Turns out they didn't serve shark after all.  The last time they tried it, everyone said it was terrible.  Apparently they didn't advertise New York steaks loud enough.

That worked in my favor.  Every dinner has raffle prizes you can win with the magic ticket number ... kind of like Bingo.  For some reason, the Lawyers like booze.  Rarely do I ever win, but THIS time, with so few people, I won a nice bottle of Ketel One vodka.  Perfect for those bloody Mary's at the RV rally. 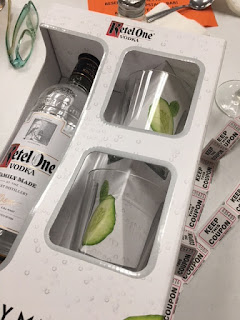 I'm afraid there won't be anything exciting on the schedule today, other than get over my food coma in order to do it again tonight at the Bingo Volunteer dinner.  I'll be spending it all on the couch with my baby puppy, hoping his ear heals up quickly.  I just can't stand to see that sad face!