As you know, I'm always up early.  This morning I got to sleep in until 5:00.  How cool is that??  Not that it works really, because the last half hour I have crazy vivid dreams.  This time I was a nervous Nelly first-time model who got called to hit the runway.

But WAIT!!!  I need a shower and a lawnmower for my legs!!  I found the shower, but the razor was nowhere to be seen.  I only found a cute little dog with eight baby puppies.  I woke up when the Mayor walked in.  I don't know what to tell you ..... I've got nothing!!

Maybe it was the soup I ate!  On my niece-in-law's bakery page, I keep seeing a delicious looking cauliflower soup.  I'm always up for a challenge.

First off I headed out to the Elks Lodge to help feed 200 challenged children, although now I understand they are to be called Special Needs children.  Parents have complained their kids are NOT challenged, so apparently we are NOT being politically correct.

It was the same turkey dinner we prepared previously.  I was so busy making sure two boys didn't escape the building that I completely forgot to take pictures.

On the way home, I stopped at Smart and Final for cauliflower.  I like cauliflower, but it's pretty boring.  Yes I've tried roasting it in the oven, but that never worked out so well.  It ended up in the cemetery.

Soup really isn't my thing.  Don't get me wrong, I LOVE soup, but it's like Chinese Food ... ten minutes later I'm hungry again!!

I searched the internet for a suitable recipe and decided on this one.  Melt a little butter and saute onions along with chopped up cauliflower and a couple cloves of garlic until it starts to brown a tad.  I actually included a small diced potato, just because I had one.  You could easily leave that out.  Stir in 3 tablespoons of flour and let it cook for a minute or two. 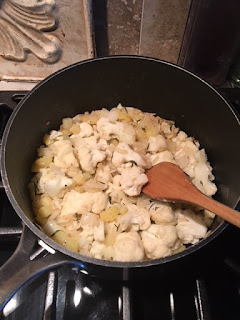 Three cups of chicken broth was followed by half a cup of cream (because I needed to use the rest of the carton) or 1 cup milk according to the recipe, and a sprig of fresh rosemary from my garden.  I let it simmer for maybe 25 minutes.

Time for the immersion blender, which I'm scared to death of.  You know how I am with sharp things, and this one can send hot soup clear across the room if not held correctly.  I like it chunky, so I only blended it for a few seconds.  Stir in 1-1/2 cups cheddar cheese until melted, followed by 2 tablespoons of cooking sherry. 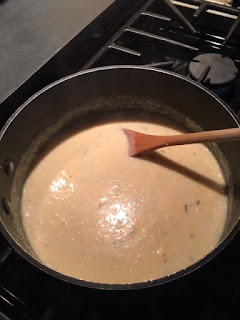 Oh my gosh!!!  This stuff is AMAZING!!  And it came from MY kitchen!!  I ate the first bowl with relish!!  Still hungry, I ate a second bowl, adding a piece of toast to fill me up.  I think at least a third bowl went down as I tasted it again and again while putting it away.  Thirty minutes later I was hungry. 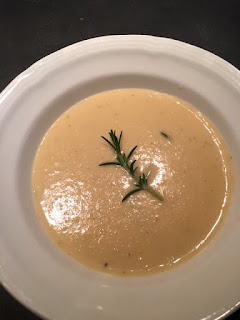 This is definitely on my keeper list.  Maybe with TWO pieces of garlic toast it will satisfy my stomach longer than Chinese food.

Today I'm going to gather up all those sticky notes I have all across the kitchen and come up with menu plans for the RV rally.  Maybe I'll even try out that quiche recipe.  With a pound of bacon in each one, I think the men may just like it!!