I Didn't Waffle On Taste Testing

See what I did there?  Yeah ....... anyway, on to the waffles and pancakes at the Yankee Hill Cooking School.  It was interesting to see three kids there this time.  I rather imagine they will not return.

It's pretty hard to keep eight year old fingers out of the food and away from the knives.  I mean really, when you were a kid, did you touch a gas stove burner to see if it was hot?  When they climbed up on the counter after being told to watch in the mirror, I thought Chef Ron would say something.

Instead, the mother in charge got the evil eye.  When the kids grabbed the first seven ebelskivers without giving anyone else a taste, they disappeared, never to be seen again.  Someone should have explained the rules. 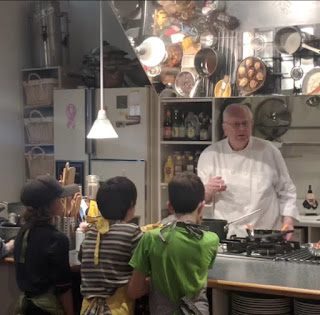 At any rate, Swedish pancakes were next up on the menu.  We threw together a quick batter with a rather runny consistency.  Here's a tip for you .... they took a butter knife and stabbed a cube of butter on the end.

It became an instant handle to swish butter around the hot pan before pouring in a ladle of batter.  As you can see, in about 40 seconds, they were beautifully brown.  Let the flipping begin.  Although we all thought about flipping with the pan, we used the spatula instead.

I have to admit, these were not my favorite.  I've never been a pancake girl.  If you wrapped them around whipped cream and chocolate, I might like them better.  Basically they had little flavor. 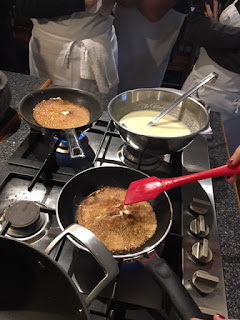 Honestly, I've never been a fan of waffles either, so I wasn't the first in line to taste test these.  Again, we whipped the egg whites into a frenzy before folding in.  Just before closing the lid, he dropped in some chocolate chips.  Ugh ... that didn't sound very good.

While they cooked, we made maple syrup.  In the days of Jessie James, my Mom used to make all our syrup.  It's simple really .... dump one cup of sugar into 1/2 cup of boiling water, stirring until the sugar dissolves.  Add one teaspoon of maple flavoring and let simmer until it becomes clear.  There you have it ... instant maple syrup.

It's almost nuclear and lasts in the fridge forever.  If it crystallizes, just reheat and serve.

Time for a taste test.  Oh my goodness ..... who would have thought waffles could taste this good, even with chocolate chips?  I may just have to head out to the Thrift Store and find a waffle machine. 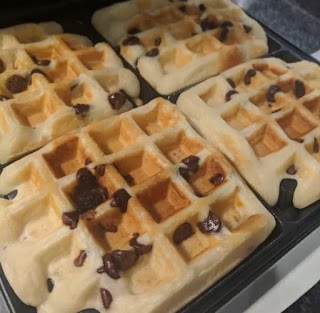 This batter was made a little differently .... all with buttermilk by the way .... and cooked in a cute little machine that made it look like a flower.  They are also MUCH thinner.  Again, they put chocolate chips in the center.

Once baked and cut apart, each section was placed on the plate to make the flower.  That didn't work so well for me, since by the time the plate was full, they were rather cold.  Maybe keep them in the oven while flower making? 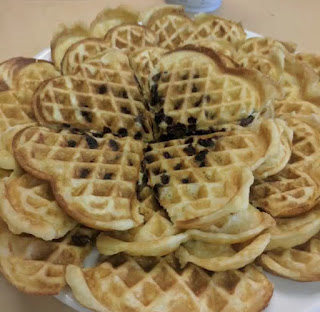 More powdered sugar .... making it look like snow.  Smother these in that maple syrup and you have breakfast AND dessert.  There were also berries and jam if you wished.  Can't find fresh blackberries in the store?  Go to the Grocery Outlet or Dollar Store he says, for anything out of season. 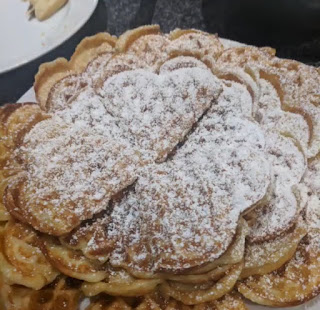 Lastly, we went for the savory sauces.  Chef Ron took one of these waffles, added an over-easy egg and topped it with hollandaise sauce.  Funny how all that tasted good together!

Next up .... mushroom sauce.  Two ounces butter melted in a large fry pan, along with eight ounces of mushrooms.  Let it cook down until just a little juice remains.  Add maybe 1-1/3 cups low sodium (or homemade) chicken stock and reduce until half the liquid is gone.  Add 4 ounces white wine and reduce again.  Add 4 ounces of cream and reduce to half again.

Herein lies the problem.  He added chicken stock in the class, but did not put chicken stock on the recipe.  I will probably leave this recipe right here until I meet up with him again.  I have to say, it was the most flavorful sauce I've ever eaten.  Throw in a couple of almost cooked thin pieces of pan fried chicken and fifteen minutes later you have dinner!

Want to do a taste test without burning your mouth?  Take a teaspoon and touch the BACK of it to the sauce.  By the time it gets to your mouth, it will be cooled enough not to burn you.  Of course we all stuck a spoon in the sauce to see if it worked.  Just don't keep using the same spoon!!

There were no take-homes from this class, other than a full stomach.  Surprisingly, I guess I like waffles after all.  I'm pretty sure they are 100% carbs which everyone is avoiding these days, but on special occasions, they would be mighty tasty.  Yes, you can freeze the leftovers, rewarming them in a toaster oven.  That's MY kind of food.