The Magic Kingdom Lives On

Was I hoping it would disappear in a poof of smoke?  Not really ... the Magic Kingdom is pretty much what gets me out of the house when I'm not on the road.  I could probably lose a few peasants and not skip a beat though.

I knew I would be alone again with the infernal machine, so I met with the Knights of the Round Table in the Castle's treasury room.  The tables are round, hence the name, and the most important things are kept there, like popcorn and libation.

Actually libation for everyone else, coke for me.  In a flash, it was time to head to the dark dungeon where the peasants would gather. 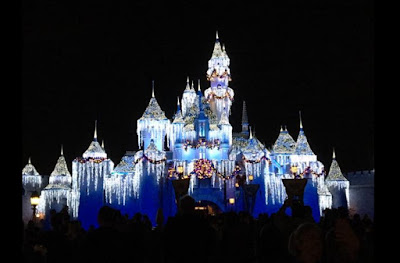 Luckily I had a helper, Princess Maribel.  I've changed her name to protect the innocent.  As Princesses go, Maribel is as sweet as they come.  All the single male peasants (and some of the married ones) follow her around like a puppy dog since she was recently widowed.  She promptly told them all where to go, as no one can replace her Prince Charming.

Once the line dwindled down to a few, she changed her clothing and slipped in with the peasants unnoticed.  She's a die-hard Bingo player!!

This being the last Bingo meeting in the dungeon until the second week in January, there were lots of new folks and old folks throwing their hard earned (or welfare) money at me.  Along with that came home baked goods.

You know how I feel about that ... do I just say no thank you and offend them or do I say THANK YOU and toss it in the trash?  There was an abundance of cookies that I collected on a plate, then took it into the main room and left it on one of the tables.  It didn't take long for them to disappear.  Magic at the Magic Kingdom, even though Merlin wasn't present.

I have to say the night went well.  There were no rolling-on-the-floor fights, no screaming matches and no hoards of peasants clamoring to kill the caller when he made a mistake.  Christmas is in the air, although I did hear one lady call another a bad name.  There's going to be coal in her stocking!!

It was then I remembered ... this is the LAST game of the month, meaning it's PIZZA time!!  Once a month we get Costco pizza for being such good little volunteers.  We also need to get the final two pints of Baskin Robbins ice cream we won at a charity auction last year.  I reminded the King, who sent a Knight on a mission to claim our property.  He came back a hero, pizza in hand.

Unfortunately he must have walked the entire distance because the pizza was cold.  The ice cream was cold too, thank goodness ..... butter pecan!!!

Happily the infernal machine balanced to a T as I sadly closed down for the year.  It's okay though, I'll see the Knights of the Round Table at Thursday night dinner ... Lawyer's Night.  We'll be dining on Shark.  Yup .... that's what the Lawyers always serve.  Fitting, right?

Friday night is the Knights of the Round Table Bingo volunteer dinner, another wonderful perk of putting up with the peasants for an entire year.

In the meantime, I have another cooking disaster to relate ... a real cemetery piece.