Guess what?  It's raining in California!!  I can't believe it's not even February and we have RAIN!!  It seems as the earth spins and rotations change, the seasons are moving farther and farther away from the norm.  Lucky for us in this desert we call the Central Valley, a nice big storm has decided to take up roots.

It started yesterday afternoon and continued all night long.  I know because I was awake most of the time.  In spite of my desperate attempt to make a correction, there is something about the downspout at the corner of my bedroom that makes a very loud ticking noise all night long when it rains.  That means about 3:00 this afternoon, I'll be asleep on the couch!!

At least it didn't affect my cinnamon rolls like it does divinity.  My Grandmother Grace was the best candy maker in the West.  She made the most beautiful white divinity EVER, telling me never to make it when it was raining, because if there was too much moisture in the air, it wouldn't set up.

She was right, because ever single time I made it at Christmas ... wintertime, right? ... there was either rain or fog.  It never set up.  I called it Spoon Fudge because you had to eat it with a spoon.  Quite tasty it was, but the consistency was something like pudding.  Okay, I'm off track here. 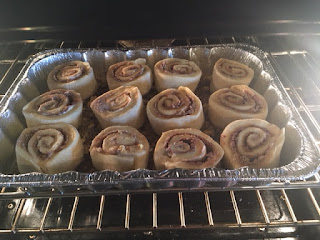 These are sticky buns, although we just called them cinnamon rolls when I was a kid.  They have a generous coating of brown sugar, butter and nuts on the bottom.   Yes you are right, this is the same picture I posted last week because I completely forgot to take a picture of the above pan before I wrapped them up and stuffed them in the freezer. 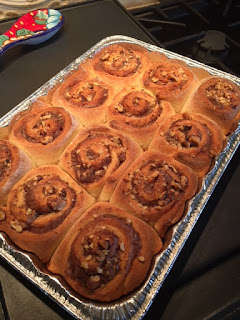 Not wanting to go outside and get wet, I spent a considerable amount of time cruising the Web asking silly questions like Where is Waldo? and is it going to snow when I head out in the RV.  For some reason I received a bunch of Messenger messages from my friends.

I certainly don't want to look a gift horse in the mouth, but did you know those messages can contain viruses and bad things that will make your computer sick?  It's not that I don't appreciate the thought ... I do .... I read it, I appreciate it and then I DELETE it.  Better to send your OWN picture and a nice thought to your friends with a note that says you don't have to copy, paste or forward this to anyone! 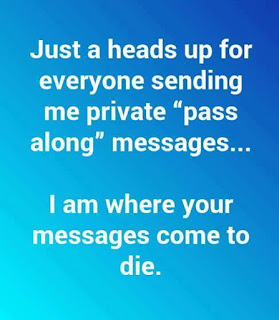 I'm probably getting payback for deleting at least one of those messages.  I don't remember any saying I would be flooded if I didn't forward it on, but apparently there WAS one.  At this moment there is a huge waterfall coming off the front of my house where the downspout seems to be plugged up.  Ugh .... I hate cleaning the gutters!!