I sneezed 589 times yesterday.  I know that number because I kept count.  At least up until the 500 mark where I lost count due to the pressure in my head.  I thought my brain was going to explode!!  I went through two boxes of kleenex while lounging on the couch.  Not really lounging, lets just say I never had the energy to stand up. 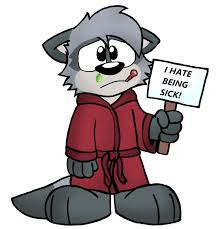 I did find out something interesting however .... the only redeeming factor of being sick .... Walmart can be a lifesaver.  Who knew?  Or better yet, who has tried it??

Most of the time I spent dozing off on the couch with the puppies and a king sized blanket.  In one of my more lucid moments, I began craving salad.  Something MORE than the horrible tasting Nutrisystem stuff I have in the freezer.  Not that I could really taste anything.

Slowly, out of the muck in the back of my little brain, I remembered something about Walmart's newest gig .... order on-line and just drive to the designated pickup spot.  There couldn't be a more perfect time to try out this service. 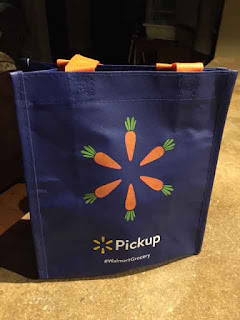 I drug myself to the computer and began the process.  Super simple, at least if you aren't sick.  It took me a couple of tries, but I finally got it down.  You can order practically ANYTHING!  I opted to skip the lettuce, in light of the current situation, and went with bag-o-spinach.  Hmmm I'm out of sugar (click), sweetened condensed milk (click click click) and just to test the process, two tomatoes and an avocado, along with other flotsam to make the order over the minimum of $30.  DONE!

Now to look at the pickup times.  There were LOTS of choices, but the same day at 5:00 worked for me.  It was 11:00 when I placed the order.  I clicked the button to charge everything to my credit card.

Sure enough, at 4:30 I got an email saying my order was ready for pickup.  I jumped in my truck as is, torn jeans, slippers and a twice worn shirt.  I donned a pair of sunglasses, even though it was overcast and I could barely see, to cover up the no-makeup face and swollen eyes.  The hair was wild and crazy, but I didn't care.

I pulled up to the pickup area where I found six reserved "pickup" spots.  On the sign was a phone number to call announcing my presence.  I could have "checked in" with my phone but didn't really want Walmart to know where I was every second of the day.  Turn OFF the location services.

In less than 5 minutes, a nice gentleman brought a cart to my truck and loaded everything in the back seat.  I quickly signed my name and was OFF, sneezing all the way.

Of course they charged me for FIVE bags, two of them only having ONE ITEM EACH.  I'll talk to them about that later, but first, I wanted to savor that salad.  Believe it or not, the tomatoes were perfect.  Exactly what I would have picked.

The REAL test was the avocado.  It was pretty soft, so I expected to throw it away.  Amazing, it was absolutely PERFECT!!  To make this service even better, they will actually DELIVER to your house.  I've no idea what the cost is, but I'm not kidding, it's worth it when you're sick.

They guarantee the prices are the same as in the store, with NO extra charges, other than maybe too many 10 cent bags.  I also really liked the web page showing not only their brands, but name brand items with all the prices listed.  This is the best thing since peanut butter for a sickie on a couch-only day.

I did order some 2032 batteries, which they did not have.  That amount was deleted from the order and my card credited for the amount.

If you detest shopping, this service is for you.  Truthfully, Walmart would not be my first choice for groceries, but with a service like this, I may just have to change that.  Try it ... you just might like it!!!