Out with the old and in with the NEW!!!  I danced around the kitchen and giggled like a little kid.  How could I be so excited over a kitchen appliance?  Of course all that happened after the small disaster.

When I ordered the microwave on line, it said Walmart was the only one who could deliver it before January 1.  In fact, delivery would be on December 28.  Later that day, I got an email that said ESTIMATED delivery date December 28.  No no no ... I need it NOW!!!

My friend Cyndae from Sacramento is visiting again and I refused to go anywhere until I got the email saying it was ready for pickup.  Just after noon, I checked my junk mail.  YES!!!  IT'S HERE!

We jumped in my truck and rushed to Walmart, parking at the very far end of the lot because of all the Christmas sale shoppers.  I went inside to use their new touch screen to tell them I was there.  Instantly my name and the apple of my eye "microwave" came up on the board.

I was so excited I couldn't stand it when Joe came out with the biggest box I've ever seen.  Uh oh ... I'm not sure that will fit.  They loaded it in a basket and carried it to the truck for me.  So far everything is going PERFECT.  In no time I'll have that nice cup of microwaved coffee. 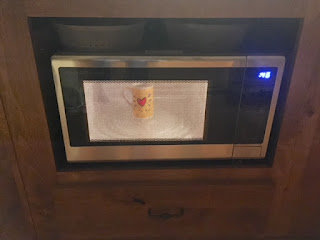 That's when disaster happened and we didn't even know it.  Cyndae had gone with me to get dog food, since she brought her dog, but not the food.  We got in the truck and drove back home.  As I pulled into the garage, I hear "where's my phone?"

Oh nooo ... did you leave it in Walmart?  No idea, so I called her number.  Amazingly, someone answered ... someone who didn't speak English.  I said "my phone", she said "no speak English".  Where are you, I asked?  Target (which happens to be next to Walmart).

We jumped in the truck and I drove like a race car driver back to Walmart.  Poor Cyndae was hanging on for dear life.  When we got there, I called the phone again and got someone who said Customer Service Walmart.

Cyndae raced inside to find a very nice lady with three kids sitting in a chair waiting for her.  She offered the nice lady $20, but she refused it.  Gosh, you just don't run into nice people very often around here.  She gave the lady's son the $20.

Lucky for Cyndae, her drivers license, military I.D., credit cards and cash were all intact.  I told her she really needed to buy a wallet and keep that stuff separate from her phone.

Back to the house, it was time to unveil my prize!!  I was very scared it was going to be too wide, but someone was looking down on us both.  It fits perfectly in the hole left by the previous owners wine fridge.  WE HAVE TOUCHDOWN!!!  And it works, which is always a bonus!!

I hate to say that Walmart has become my go-to store, but you can get everything there, or at least almost everything.  The previous day's trip netted more gelatin, Def fluid which I was out of for the rig, four big bottles of water for the RV rally outdoor cooking and Valentine's Day candy.

Yup ... it wasn't even December 27 and they had Valentines candy and cards on the shelves.  The candy is for the rally too ... whoever has the best candy on their group's table, wins the most newcomers attention.

I hate those do-it-yourself check out stations which eliminate employees, but honestly found I love them when it comes to checking out.  This Walmart has only had two employees checking folks purchases anyway, even if there are ten stations available.  The lines were always LONG!

Doing it yourself bypasses all the talking and chitty chatting about those adorable jammies they have on, or what their current shampoo is, not to mention changing their mind about purchases.  I checked myself out in a matter of seconds, only using two bags instead of the usual six and even got cash back.  I was dancing in the aisles.