I laughed when I saw this on the internet.  It fits me perfectly.  Not that I drink a lot of wine ... I can survive on a single small glass once a week, if that.  I definitely need my puppies though, who keep me company, snuggle with me at night and make me laugh all day long. 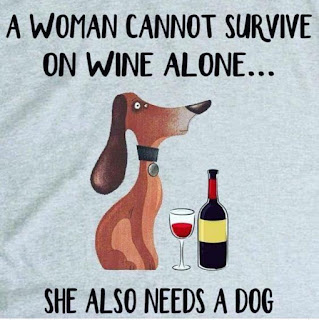 Not the best picture in the world, but here we are cuddled up on the couch.  This was the last picture my friend took before losing her phone at Walmart.  Speaking of Walmart, I forgot to mention the Def fluid.

My rig was one of the first to come out with a Def requirement and a tank to hold such requirement.  Problem is, they put the tank on the wrong side of the rig.  The only way to fill it at a fuel station is to head in the wrong direction.

Truckers don't like us taking up their space, so you can imagine how happy they are when they see that.  To keep the peace, I prefer to buy it at Walmart.  Yes, it's probably more expensive, but worth NOT having a hassle. 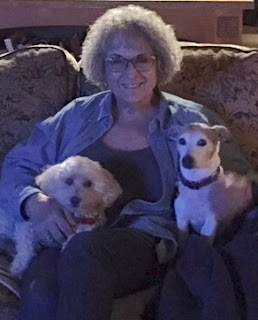 It's officially freezing in Central California.  Several days in a row now we have had below freezing mornings.  I cringe every time I hear the heating system come on.  I have to say it's not much better in Arizona where my second home lives.  It's been down to 26 something there!!  Maybe it will freeze out all the pack rats!

To keep busy, I've been baking once more.  This is a super simple shortbread recipe you make in less than ten minutes, then put in the fridge.  They are supposed to be perfectly round rolls before slicing them, but as you can see, I wasn't very good at the rolling part. 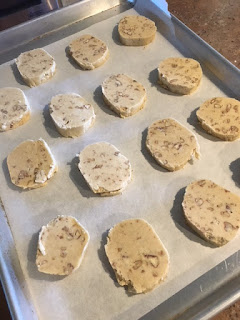 Nevertheless, they came out delicious.  These were at the request of Jonathan.  He's finally gotten tired of the bits of peanut butter cookie he gets.  In case you were wondering, he's SO happy his morning scrambled eggs are now warm from the microwave.

This kid eats better than I do.  Chopped apple, grated carrots, sunflower seeds in the shell and out, safflower seeds, banana, banana bread, spinach and a specially baked corn biscuit are his usual morning fare, along with scrambled eggs and sometimes toast.  That's probably why he has lived so very long. 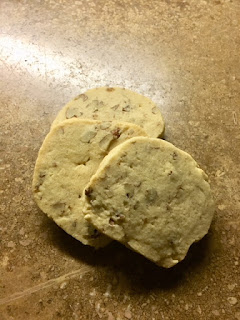 It's getting closer and closer to take off time and I need to hit the hose and bucket.  I'll show you pictures of what I'm up against tomorrow.  Unfortunately, it's going to require a ladder ... a very TALL ladder.