The Killers And The Killed

Truth be told, I'd rather be on the first side of that equation.  Everyone killed everyone back in those days for even the slightest of slight.  Arguments were settled by the gun.  Eventually the townspeople would hire a Marshal to try and keep the flying bullets and deaths to a minimum.

Meet Virgil Earp, Deputy US Marshal and City Marshal of Tombstone.  He and his brothers were cleaning up the town of the Cowboy activity (not the cattle rancher kind, but the cattle rustler, stagecoach-holding-up kind).

You all know the story of the gunfight at the OK Corral in October of 1881.  As a result of that, all four of the Good Guys were charged with murder by Ike Clanton who ran away during the gunfight. 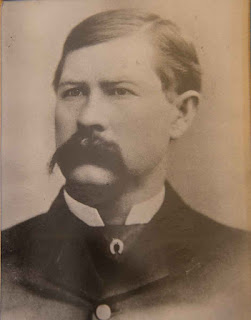 Judge Spicer found Virgil, Morgan, Doc and Wyatt innocent, saying they were just doing their duty.  Two months later, the friends of the men killed went to the second story of the Owl Cafe and Hotel, and using a shotgun (seems to me a bad choice of weapon), shot Virgil in the back with three rounds, shattering his left arm.  The Cowboys were suspected, but there was no evidence to prove it.

Two months later in March of 1882, they ambushed Morgan, pictured here at 30 years of age.  Mighty fine looking I might add.  Shot through the window of a door while he was playing billiards, he was killed.  Again, due to lack of evidence, the Cowboys got away stock free. 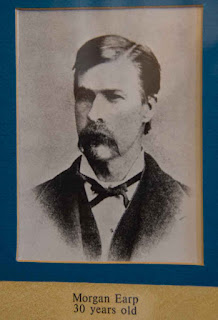 That was enough for Wyatt.  Having been appointed Deputy US Marshal replacing Virgil, he decided the courts weren't going to help and he assembled a Federal Posse and went on a vendetta to kill them.

Wyatt was pretty restless all his life.  Raised in Iowa, his first wife died of typhoid fever just before their first child was born.  During the next few years, he was arrested for stealing a horse, escaped from jail, was arrested a couple more times and fined for running a house of ill repute.

Moving on to Wichita Kansas where his brother James ran a brothel, he was appointed to the police force, but that didn't last long when he was fired for fighting with his bosses opponent.   In 1876 he followed his brother James to Dodge City Kansas, becoming an Assistant City Marshal.  His reputation as a lawman, preceded him. 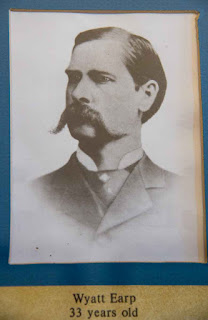 While chasing after an outlaw clear to Texas, he met up with Doc Holiday, another good looking gentleman if you ask me.  Moving from one boomtown to another, Wyatt and his brothers ended up in Tombstone in 1879.  We all know what happened there.  Wyatt credits Doc with saving his life at the OK Corral.

Wyatt, along with his brother Warren, Doc and the Federal Posse, tracked down and killed the three men they thought responsible for the death of Morgan. 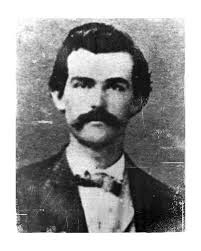 The Killed ..... Frank (top left) and Tom McLaury (top right).  They had several small ranches along with the Clantons, allowing them to duck in and out of Mexico with stolen cattle and goods.  At the time, the Clantons owned the largest cattle operation around.  Unhappy that their operation had a hitch in it's gitalong named Morgan Earp, they constantly threatened the Marshal with death.

In 1880, a US Army Captain asked the Earps to help him track down six mules stolen from the Army.  The mules were found at the McLaury ranch, along with a running iron used to change the brands on stolen cattle.  That, along with a few stagecoach robberies, ended up in the fight at the corral. 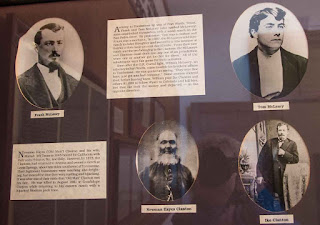 We all know what happened to them there.  I don't know who ended up with the property known as Boot Hill outside Tombstone, but yes, you have to pay to walk through the graveyard.  I have to say this is another one that is worth it.

With about 300 burials, only 205 of which were recorded, the City Cemetery was closed, becoming the Old City Cemetery while the new one opened up out on Allen Street.  This one fell into complete disrepair with most of the headstones either stolen or disintegrating.  Thanks to one man, Emmett Crook Nunnally, it was basically restored.  He piled up all the rocks and put back most of the headstones, all done voluntarily.

I have to say you shouldn't believe every headstone however, as many of those you see are for people that really are NOT buried here.  The McLaury's and Billy Clanton, however, ARE here as shown in this picture.  The families have erected their own headstones, which read they were all murdered in cold blood. 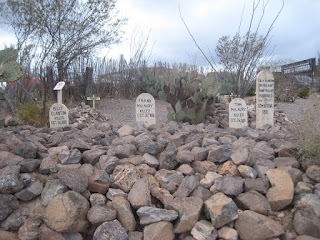 Life sure must have been exciting in the days of the Old West.  Here's another money stop in the town of Tombstone ... the Clanton Haunted Hotel.  I don't know what they charge for this one, as it was closed on the day I was there.  You can go online to You-Tube and see the entire tour.  I'd skip it ... this one is NOT worth the money. 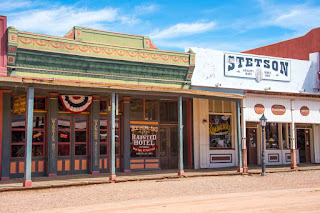 THIS however, is ALWAYS worth the money.  Nothing like enjoying ice cream on the streets of Tombstone Arizona!!  Double scoop .... $4.00. 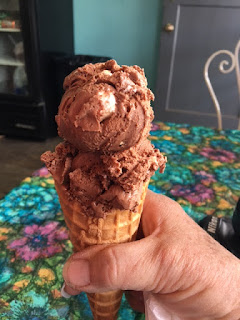 The rest of the Wyatt Earp story ... since he was a lifelong gambler, he moved to San Francisco where he met up with Josephine.  They joined a gold rush in Eagle City Idaho, where they bought a mine and opened a saloon.  Next they moved to San Diego where they opened another saloon and Wyatt became a referee of horse races and events.

His reputation suffered greatly however, when he called a foul at a boxing match which made people believe he fixed the fight.  In 1899 he and Josephine moved to Alaska with the Nome Gold Rush where they opened a two story saloon called the Dexter, making $80,000 along the way.

Around 1911, he came back, working mining claims in California where he met up with some of the early Western actors, including John Wayne.  He died in 1929 with a notoriously bad reputation which turned to gold when his biography was written, Wyatt Earp - Frontier Marshall.

And that's the end of the Tombstone tour.  Aren't you glad?  Time to get back to modern day quilting since the rains are again falling in the desert!!