Not dead yet, but Tombstone sure could use some oxygen.  I love this town ... I should have been born into this era of the old west ... or maybe I was and that's why I love it so much.  Who knows. 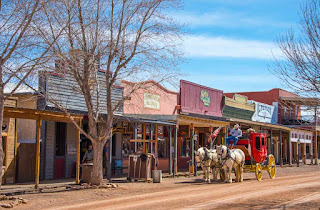 At any rate, I spent the entire day there wandering the back streets and basements of the town too tough to die.  Here's the courthouse in the "olden" days. 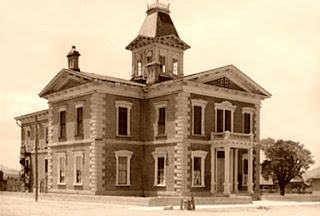 The town was founded in 1879 by Ed Schieffelin, briefly an Army Scout at Fort Huachuca.  Every day he would go out hunting for the elusive silver that would make him a fortune.  Since several scouts had been killed by Apache in that area, his friends told him all he would find was his tombstone.

Instead, he found a dry wash with some color and followed it to a big vein.  He ended up staking a claim and called it Tombstone.  He did become a millionaire of sorts, but wanted to be buried in his mining duds on the Santa Rita hills behind the town when he died.  The town folk obliged him. 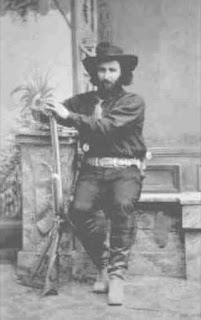 Goose Flats as it was then known, the only spot flat enough for a town, was surveyed and plots sold for $5.00 each.  The perfect spot to erect your canvas tent.  And so Tombstone was born.

Here's what the Courthouse looks like today.  Exactly the same.  Built in 1882, it saw lots of action between the miners, the Cowboys (rustlers and cattle thieves) and the Cattle Ranchers.  Seems the miner capitalists were mostly from the Republican North States with the Ranchers and Cowboys being Confederate Southern Democrats .... and the fights were on!! 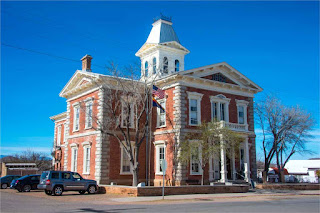 Tombstone grew into a metropolis with it's bowling alley, ice house, two banks, three newspapers and 110 saloons for it's 14,000 people.  There were also 14 gambling halls, lots of dance halls and brothels too numerous to count.  Restaurants were everywhere, including French, Italian and Mexican.  Back in the day, it looked something like this. 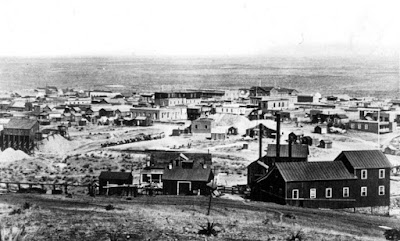 Up on the same hill, I couldn't quite get high enough for the same picture, although you can see where the mine used to be in the foreground.

Unfortunately for Tombstone, with most everything built of wood, fire became an ongoing problem.  Building practices weren't exactly to code and in 1881, a lit cigar hitting a whiskey barrel in the Arcade Saloon set off a fire big enough to reduce 66 businesses to ashes, the entire Eastern half of the town. 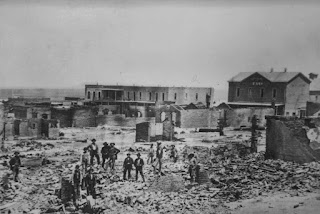 In 1882, the most destructive fire started in a Chinese Laundry on Fifth Street.  It destroyed over 100 buildings, almost every business in town.  Undeterred, they rebuilt again, and by 1883, there were two hotels and several saloons back in business.  Those are the buildings you see today. 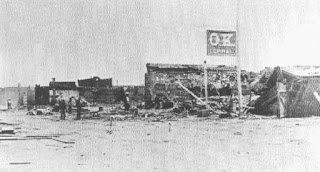 Originally the Grand Hotel, this building went up in flames.  Big Nose Kates Saloon took it's place.  Originally from Hungary, at 16 years of age after her parents passed away, she ran away from her foster family.  Although there are lots of stories about her exploits, none can really be verified, except by 1869 she was a "sporting" girl, working for James Earp's wife in Dodge City Kansas. 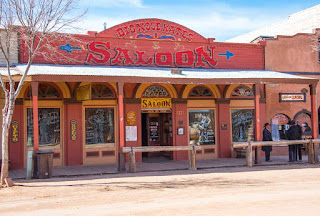 In 1876 she met and eventually became the common law wife of Doc Holiday.  They were together on and off for years while he gambled and she worked as a prostitute.  When the Earps moved to Tombstone, Doc and Kate followed, looking for money making propositions.  Here she is at age 50.  Doc died when he was 35. 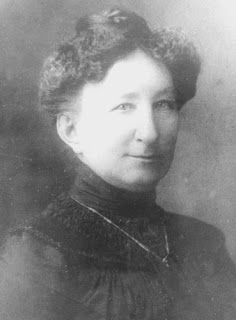 There's a long story about how Kate implicated Doc in a robbery one night as she was plied with alcohol and drunk as a skunk.  It was a plot of the Cowboys and eventually thrown out of court.  I tried to discover if she actually owned this establishment, but it's going to require more footwork.

At any rate, this is where I always have lunch while in Tombstone.  Their Rueben sandwich is awesome!!  Definitely stop in here, have a seat at the bar and order pepsi or a beer.  With one exception, the staff are very attentive. 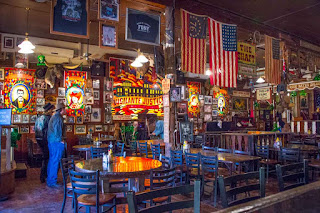 Here's that lovely Reuben sandwich, MUCH more than I can eat in one setting, but I gave it a good shot. 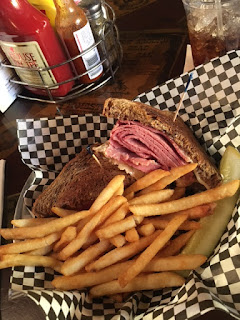 Once you've eaten, or even if you haven't, climb down the tiny narrow stairway to the basement.  Come on ... you can do it!!  This part is original and not disturbed by the fire much.  They have a cheesy gift shop with reproduction clothing if your desire in life is to look like a prostitute. 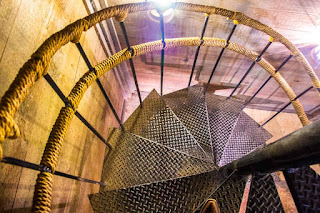 You'd be surprised how many girls I've seen down here donning the required accoutrements and walking about town.  This stuff comes in every size imaginable.  They will probably never wear any of it again ... at least I hope they don't. 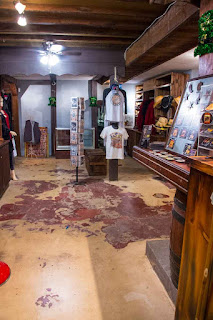 This is where the Grand Hotel janitor, called the swamper, spent his off time.  When not cleaning the hotel or bar above, he lived in the dark recesses of the basement with his own private 10' x 10' room.  Not a slacker, he knew the mines had tunnels below the hotel, so he spent his off hours digging down into the silver tunnels where they say he gathered quite a bit of the high test rock.  Here's the hole he dug along with a ladder leading down into darkness.  No one knows if he got rich or not. 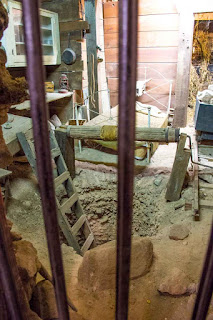 There are too many stories here to tell in one day, so I'll spread it out over the next week or so.  AND I have to make a return trip due to two things ... one, I saw something in my pictures I need to check out and two, I want to stop in and visit with friends Lynn and Dave in Benson.