Over The Hills And Through The Woods

There's no woods, but you knew that.  Just windmills galore!!!   I knew it was going to be a long driving day.  I prefer those two hour drives that land me at a nice camping spot next to a fabric store, but it was not to be this time.  There was still snow on the mountains as I headed down those horrible high-traffic freeways to crazy city after city. 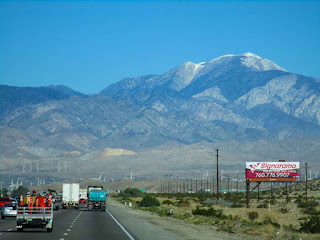 Even though I've driven the highways many times, I'm always leery of missing an offramp.  I've missed the one that goes around San Bernardino for the last twelve trips.  The good news is the bypass I end up on is brand new and a smooth ride. 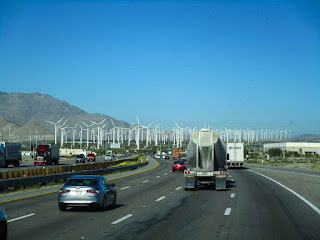 I have to say I LOVE this Allison Transmission and Fifth Gear!!  If the big trucks would just leave me alone, I'd be fine.  They always seem to want their lane and half of mine.  By the time I got to the top of the mountain and off on Hwy 395, I was pretty tired.  Luckily there are convenient wide spaces where the trucks pull over, giving me a nice spot to relax and water the puppies.

That's when these guys went by.  Have you ever seen TWO flag trucks with those feelers 13 or 14 foot high?  Following is only one wide load truck.  Looks like overkill to me, but I suppose it takes the guesswork out of it. 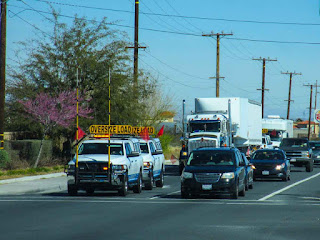 There were some expansive views as I came down the mountainside headed to four corners.  Which reminds me, while leaving Tucson, I counted nine ... that's right NINE Highway Patrol vehicles, or State Troopers as they now call themselves.  I've since driven 250 miles in California and not seen one single CHP.  No wonder everyone speeds!! 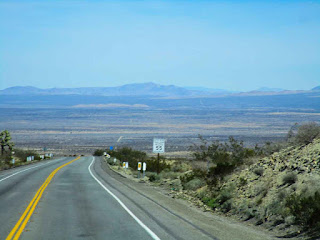 I'm not sure how, but I cut 30 minutes off my best time to arrive in Bakersfield.  Honestly, I never went over 58 mph.  This place isn't the cheapest, but Orange Grove RV park has full hookups and a 90 foot pull through for $45.  Worth every penny.  I can attest to their good electrical service since my AC was on for seven hours with no interruption.  It's a tad bit warm in the valley. 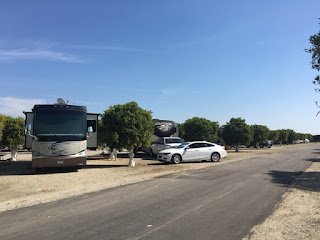 Outside smells wonderful, but I couldn't figure out why.  It finally dawned on me ... the orange trees are blossoming already. 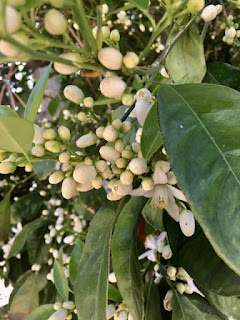 They smell delicious, but don't get too close.  They are covered with honey bees!!  As for the oranges, they are at the tippy top of the trees and very small.  Not worth the picking, or scrambling up into the tree to reach them. 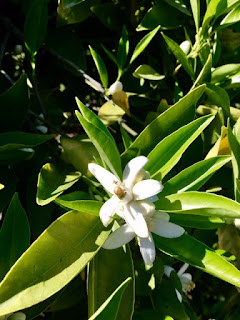 Last night I was SO happy to find a channel that had the Giants-Dodgers opening day baseball game.  It was a nice way to pass the evening, especially since the Giants, short two of our best pitchers and using our third option against the best-in-the West Kershaw, BEAT LA IN LA by one point!!!  It doesn't get better than that!

This morning I'll get a propane fill before taking off on the last leg to home.  The Bingo crew has already contacted me for a landing date.  The Magic Kingdom of Bingo is alive and well!!