Of all the buildings in this Old West town, this is the building that has been kept original.  I can't mention their name because internet photos are not allowed.  In my investigation however, photos are everywhere!!  So here goes ...... 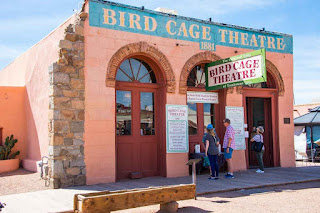 You will hear the lady behind the bar "barking" like a circus tent attraction, trying to get you to come in and spend a little money.  Let me first say in my humble opinion, it is TOTALLY worth the $12 cost.

This is the original bar, about half the size you would expect it to be.  In fact, if you look around, you will find almost everything here is original to 1881-82. 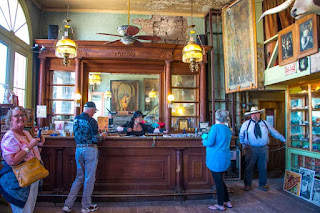 This was the lower echelon of entertainment spots in Tombstone.  Bankers and Mine Owners went to the Schiefflin hall for entertainment.  Miners and people down on their luck, went here where the entertainment was cheap and bawdy.

This picture is an original playbill from the Human Fly attraction.  Two girls would hang upside down from the ceiling, meaning their skirts would fall down around their head, putting on a good show for the men who were fascinated.  How can they do that??  There was a sheet of steel secured to the ceiling and they had magnets in their shoes.

Should you have enough money with you, you could ascend the tiny narrow staircase to one of fourteen cribs.  Drinks and food were carried up to the second floor by a dumbwaiter which still exists. 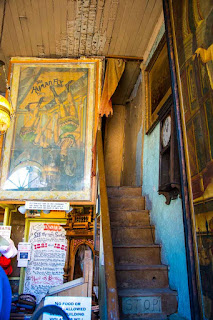 This is the entire theatre.  Rather small, don't you think?  The tiny cribs up top along each wall rented for $25 a night.  About three foot wide by maybe eight foot long, they contained a small bed and maybe a chair.  Kind of right out in the open!!  Oh they could pull the curtain closed, but everyone still knew what was going on! 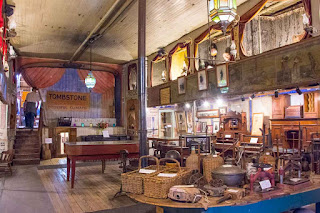 Wyatt Earp rented a crib almost every night, as did one Russian gentleman.  He wanted so badly to be one of the BAD guys, that one night he stole a horse.  He was caught and hanged.  So much for being one of the crowd. 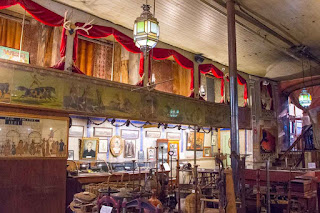 You can see circus pictures around the lower crib walls that were lithographed from old wooden cuts and smuggled into this country from Sweden. 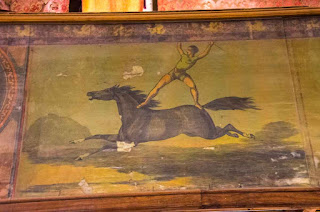 The guy who made them never saw a circus in his life. 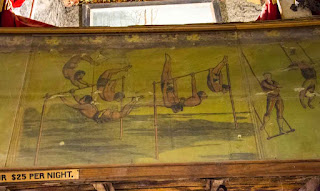 The grand piano is original and has been in this exact spot since 1881.  It is made of rose wood and is hand carved, furnishing music for all the shows.  It came around the horn of South America to San Francisco by boat, then by mule train to Tombstone.  I imagine it still plays, but I wasn't going to go to jail for finding out. 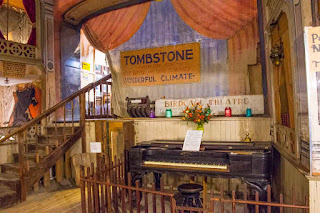 Here's a close up of the curtain ... actually just a painted-on-canvas curtain.  Look at the top and sides though.  Those are original paintings on the walls that still exist.  Pretty fancy for such a small theatre. 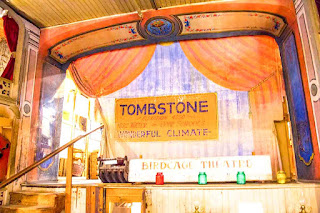 This would be your view if you were on stage entertaining the miners.  The floor would have been full of gambling tables and chairs. 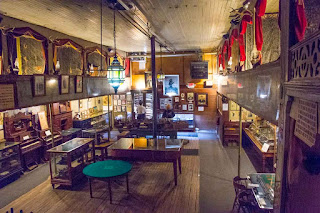 There were lots of well known entertainers who played in this small theatre.  Miss Lillian Russell was one of them.  She was 17 years old when she sang Bird In A Gilded Cage from this very stage on opening night.  The song was actually written that day by Arthur Lamb while standing at the bar with Eddie Foy.

Foy said he thought the placed looked like a coffin.  Lamb thought it more like a bird cage, with the cribs full of scantily clad ladies sporting lots of feathers.  Lillian sang the song that night and it launched her career to stardom. 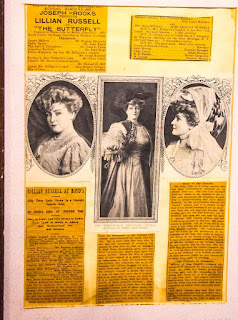 And just who kept the entertainment coming?  These two ... the original owners.  Meet Lottie and Billy Hutchison.  Usually a producer of respectable shows, they hosted a Ladies Night for the prim and proper of Tombstone.  It didn't go over well at all, so they decided the bawdier the better, packing the place with miners every night. 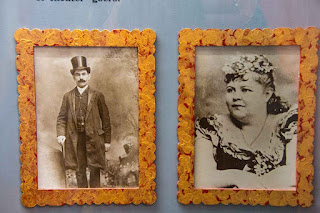 Once behind the stage, you can see lots of advertisements and handbills.  At least you USED to see them.  I have to say that most of the items hanging on the walls on my last visit, have disappeared.  Even the guy who was in this coffin standing against the wall is gone.  Maybe they sold stuff?  Who knows.  They could probably sell this hearse since it is the one that carried literally everyone to BootHill.  Worth a small fortune they say. 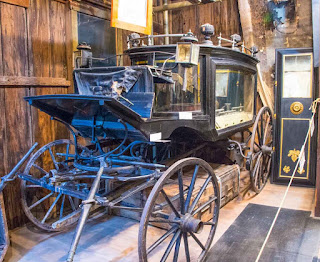 Down the back stairs of the theater are the poker tables.  It cost $1,000 to get into this game, which ran continuously.  If you wanted to play, you put your name up, along with your money.  They would contact you in 3 to 4 days when a spot opened up. 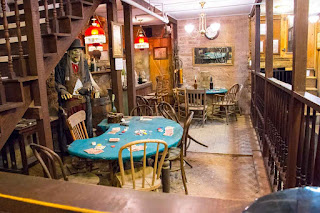 Just in case you didn't know the rules, they are posted on the wall. 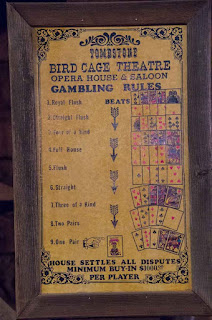 There are also three bordello rooms across from the poker tables and small bar.  This particular one belonged to Sara Josephine Marcus of Sadie Jo and Wyatt Earp fame.  Wyatt and his wife Mattie lived very close to here, allowing for easy access.

Mattie, hooked on laudanum and snake oil, ended up working as a prostitute when Wyatt left her for Josephine.  She eventually moved to Prescott where she either overdosed or took her life using the same laudanum.

This image is actually from my last visit.  Many of the items here seem to have disappeared and the lights are so low you can hardly see. 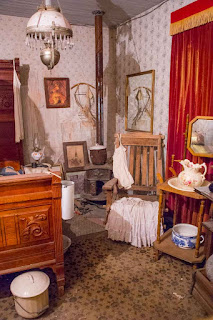 Exit through the gift shop, but keep an eye out for the portraits of the ladies of the evening.  There are still a few more stories around Tombstone, including the amount of taxes people had to pay ... and still pay to this day.  Last year I looked for a piece of property there and was shocked at what I found.  But that's a story for another day.