What in the world is that you ask?  You're not alone .... I thought the same thing.  If you are driving down Highway 10 to Tucson Arizona, you'll see Saguaro National Park.  Pretty amazing that a species of cactus has it's own park, and in fact, has TWO parks.

I just threw this image in for the color.  This is sunrise in Tucson. 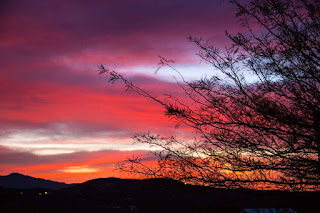 At any rate, back to the Saguaro parks.  Saguaro's only grow at specific elevations.  The Hohokam Indians found that elevation to be the perfect place to grow food for survival when they lived here up until about 1450.

In 1692 non-natives moved in when the San Xavier Mission was built.  When Arizona became part of the United States and the Homestead Act was passed in 1862, followed by the railroads in 1880, this area began to see lots of development.  Here's a nice picture of the Rincon Mountains east of Tucson.

In 1933 local publisher Frank Hitchcock convinced Herbert Hoover to create the Saguaro National Park east of Tucson, calling it the Rincon Mountain District (RMD).  This is the one I drove through. 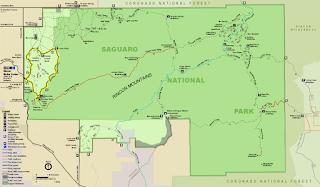 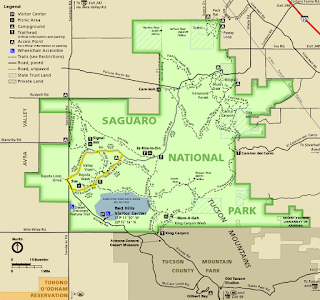 This one East of Tucson is not near as well known, nor as well traveled as the other.  There are lots of hiking trails if you are interested and picnic tables where you can lounge away the afternoon.  This is another GO EARLY place.  It's much more relaxing to drive through this park (with stopping points along the way) when it's quiet.  Don't be the guy who never shut off his old, extremely noisy diesel truck.  It disrupted the whole ambiance. 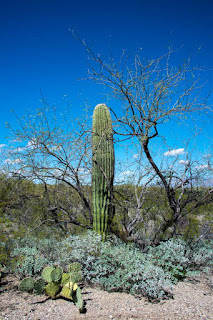 Saguaros grow at an exceptionally slow rate.  The one above is a baby.  This one just beginning to sprout arms is from 50-70 years old.  They may live as long as 200 years and are considered mature at about 125. 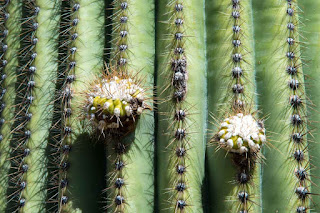 There's no rhyme or reason why they all grow so differently.  Some have short arms, some have long arms that hang down, apparently all depending on the amount of water available.  It's safe to say no two look alike. 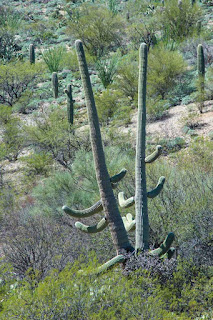 Here's a baby just getting a start and splitting it's ribs.  I was hoping with all the rain we have had they would be blooming, an amazing thing to see.  The flowers open in the morning and close at night, but alas, it's just too early in the year. 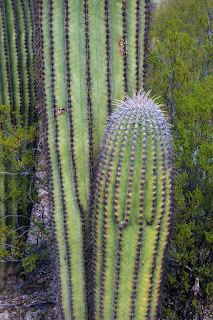 If you want to see petroglyphs, head out the Signal Hill Trail.  Unfortunately, I didn't get the memo.  Maybe next time.  Saguaros absorb water, actually expanding their girth, then using the water as necessary to survive.  Natures canteen. 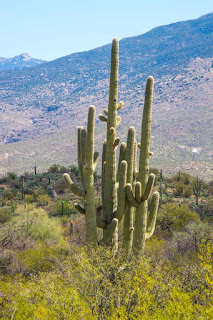 Here's a couple of happy campers!!  If you drive by the picnic tables, take a look at the rock work.  There's CCC again, building the infrastructure in 1933-41. 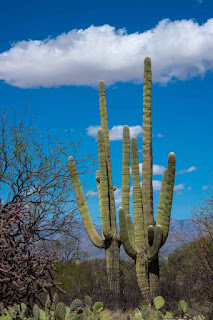 Contrary to popular belief, you don't get a 25 year jail sentence if you cut one down, but it IS considered a class four felony.  Harming one, or accidentally knocking one over will get you a stiff penalty.

Next up ... the critters that live in and around the saguaros.  Once the guy in the truck left, I could actually hear what was going on around me.