The REAL story ...... In April of 1887 there really was a holdup of the 20-passenger train near Pantano.  You've probably heard of it.  Wells Fargo Messenger Charles Smith barricaded himself behind the locked doors of the express car.

The bandits were having none of that, so they forced the engineer to carry heavy explosives back to the car and threaten to blow everything up, including Charles.  He opened the door.  The bad guys uncoupled the engine along with a few cars and steamed off towards Tucson, leaving the passengers stranded.

Once they found all the money, they jumped off, put the engine in reverse and sent it steaming back into the desert.  They got away with some cash, but most of it was still sitting in the express car stove where Charles had stashed it.

Caving can be dark and dangerous, especially when it comes to finding your way out.  I truly can't imagine those bandits skinnying through tiny holes trying to escape the underground.  Solomon Lick just used his miners lamp to find the witch and followed her big nose to the cave entrance. 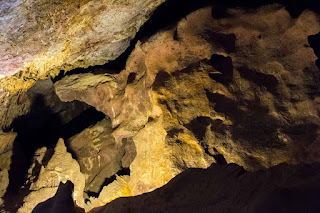 On August 10, 1887 ... same train, same robbers, same Charles Smith, only this time they booby trapped the rails with dynamite and sent the engine flying off the track onto it's side.  Charles refused to open the doors again, so they blew it open and beat him up until he opened the safe. 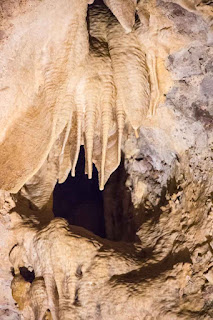 The Sheriff, Yuma Indian trackers, the calvary and even Wyatt Earp tracked them to the cave, but the bandits were long gone with the loot, having escaped in a gully washer rain storm. 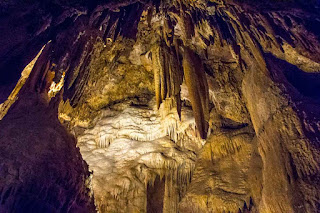 As to all the money that was stolen from the trains, Wells Fargo remained tight lipped, not wanting to really let anyone know, since it might cause their customers to lose faith.

So is there gold still buried in Colossal Cave?  Probably not.  Solomon Lick only found bat guano.  In 1905 he built a tunnel 82 feet long and set in rails as he extricated every bit of guano he could find.  They say it made great makeup since it had good sticking qualities.  Seven carloads later, it was gone and the cave abandoned. 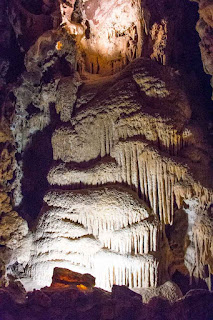 In 1935 with the New Deal for unemployment, the Civilian Conservation Corps was established.  I'm not sure what kind of "pull" the owners had, but a headquarters was set up at La Posta Quemada Ranch and they went to work on the cave.

Living in tents, the First Company 858 worked in the cave and built the Army barracks that the Second Company lived in.  The Second Company built the rock building that surrounds the cave entrance.  It is interesting to note that their diet consisted almost exclusively of beans, as reported in their Newsletter they printed entitled The Cave Man.

Speaking of which, this is the first MAN CAVE.  In the summers when it was so terribly hot, the local ranchers would congregate here on the floor of the cave where they played poker day after day.  Even with 118 degrees outside, the cave remained a pleasant 70 degrees. 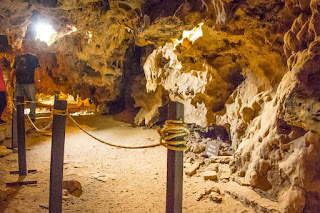 Looking for an interesting place to get married?  How about up these stairs to the Altar.  Yes you really can!! 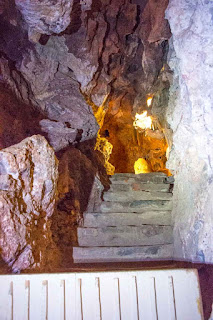 I think while the CCC guys worked, they also played a little.  There are several instances of holes in the rock that don't exactly look like Mother Nature's handiwork, including this face that I truly didn't see until I checked the pictures.  I was just taking images of the holes in the rock. 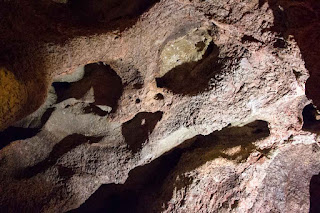 What they DID do is build all the walkways and steps throughout the cave.  Not highly trained, you will find them to be quite uneven in places.  Grab the handrail whenever possible.  When I asked how they got all this rock and concrete INTO the cave, the answer was shown to us.  This is the bottom of a building located half inside the cave and half out. 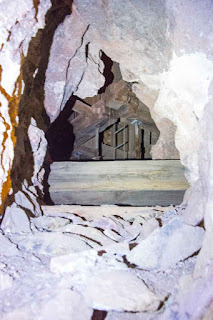 All the rock and concrete came down through this elevator shaft to the bottom of the cave.  These guys really worked hard for their beans, because it was all carried in a wheelbarrow and hand set. 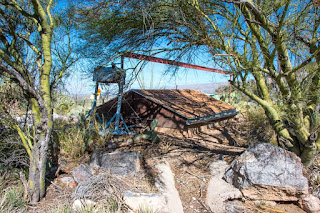 The bad news was that when done, it was time for the war to break out.  Anyone who had signed on the dotted line to work with the CCC was instantly conscripted into the Army, where they probably had to eat even MORE beans.

So if you're out and about in the Tucson area, check out Colossal Cave, if only for the bandit and robbery history.  With no other way to make money around here in the old days, there was lots of stealing going on.  Maybe you'll even be the lucky one to spot the hidden gold in the cave.