I Am NOT A Good Driller

What a mess in this first picture, right??  Since the flooring was completed, I finally had time to hit up Ace Hardware for some mini project items.

First off ... paint for the guest bathroom floor molding.  My painters of last June forgot to paint those. Wasn't I surprised when I found a QUART of paint cost me $17.99.  Good grief ... I know this is an expensive store, but when did paint get up to $72 a gallon???

Next up ... door handles.  Apparently back in the day, handles on drawers and cabinets became obsolete.  It was the CLEAN look.  Have you ever tried to open doors and drawers with no handles?  I was constantly getting my fingers pinched and my nails broken.

Unfortunately for me, I need 28 ... yes, that's TWENTY EIGHT ... handles just for the kitchen.  I found a nice box of ten, figuring I'd get the rest later.  If bought separately, they were $4-6 EACH!  Figure that one out!  YIKES!!  I was thinking maybe I should hit the desert on a search for "natural" wood I could screw on instead.

Then it dawned on me I would probably never be able to find the same handles, so scrap the kitchen idea and head for the bathroom.  Luckily they had these handy dandy guides for $1.99 so I could mark exactly where to drill.  It's a good thing I started in the bathroom to get some practice before I ruined all my kitchen cabinets.

First off, I had to completely rebuild the first drawer.  The face had fallen off and someone had tried to screw it back on.  What a mess THAT was.  Finally repaired, I drilled my first hole.  WOW ... that went quite well.  Then I tried to put the handle on.  Naturally, the included screws are WAY too short. 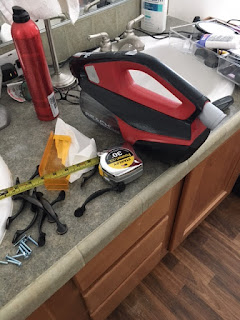 I tried the door handles instead.  I admit, I had to drill one twice.  No matter how careful you are in placing the tip right on the black mark I made, there was just enough difference that the holes were the tiniest bit off.  BUT ... I got them on and they are WONDERFUL.  You can't imagine how nice it is to open a door with a handle.  It's the little things in life!!! 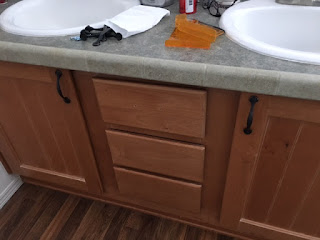 With only five handles required in that bathroom, compared to the ten I bought (which amounted to $2 each) I figured to use the rest SOMEWHERE.  Like the guest bathroom.

I never said I was good at drilling, although I really thought I was on a roll after the first ten holes.  On the very last one, for some reason the wood was so hard I just couldn't get through.  What in the world?  Try as I might, the drill just wasn't working.

I'm sure the men know what was up.  It took me ten minutes to figure it out and I'm embarrassed to admit it.  There's a forward and reverse button.  Now you know my shame.  I had hit the reverse button to remove the drill from the other door and forgot to reset it.  Yup ... drilling backwards.  I literally laid on the floor and laughed!!

SO ... in the end, I got these two installed and not only do they look nice, but they WORK!!! 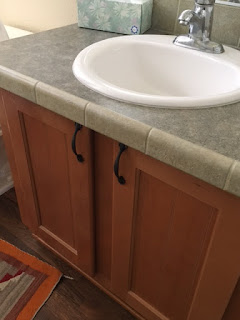 That was enough PROJECT for the day.  Patty, Pat and I ran off to the grand opening of a new Sprouts Market akin to a Los Angeles traffic jam.  We had lots of tastings, discovered many new products and were jostled around like cattle.  It was a fun time, since us three crazy ladies can have a good time anywhere.

Here's a quick picture of the Chance laminate floor.  It goes perfect with her antique furniture!! 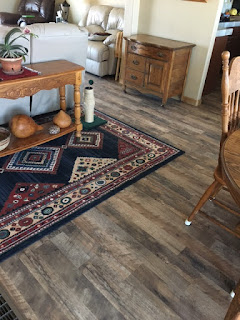 Having been gone most of the day, I spent the rest of the evening getting puppy snuggles from each side. Maybe next week I'll head off to the far northern reaches of Tucson to look for more of the same handles so I can finish the kitchen cabinets.

Next up .... foaming a hole in the foundation, painting and picture hanging 101.  Somebody's got to do it!!