Dinner In A Box

You know by now that I'm not the sharpest knife in the drawer when it comes to cooking.  In fact, for the last two months, I've been back on the Nutrisystem Program, the all-frozen variety.  You know what I like most about it?  Not the weight loss, which is minimal at best, but the convenience and ease of prep.  Just take it out of the freezer and nuke it 1-2 minutes.  Instant dinner.

Knowing of my troubles, Chef Patty is always trying to help me cook healthier and more appetizing meals.  At the local Fry's Market, she discovered Meal In A Box, their newest innovation.  What a GREAT idea.  Sort of like Blue Apron or one of those companies who sends you meal items that you prepare. 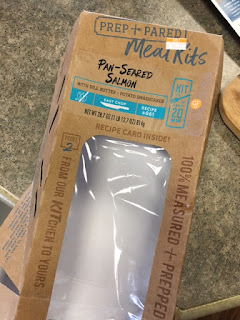 So while out yesterday, I bought  Pan-Seared Salmon.  I almost had a heart attack when I saw the price of $20.00, but I was hoping for a discount at the checkout stand.  Alas, there was NO discount.  They also had Crispy Pork Chops for $18 and Pasta Prima Vera for $16.00.  I'm sure I could make pasta for 10 people at that price, so I opted for the salmon.

Inside the box was twice wrapped salmon (much smaller than the photo size), eight red potatoes, a big sprig of fresh dill, two packets of sour cream, a lemon and two small pieces of butter.  At the very bottom I found the recipe .... actually very cool because you can keep it to make again. 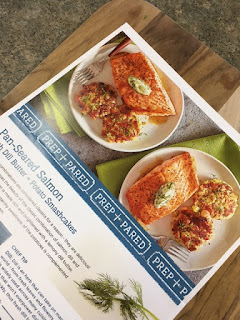 I prepped the salmon, placing it face first in the pan with one big piece of dill.  Next up ... squash the potatoes IN THE BAG, in order to have something akin to mashed potatoes to make patties. 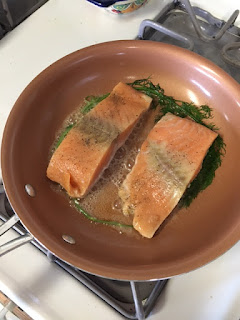 That part didn't work out so well.  Those potatoes were hard as a rock.  I even tried my hammer (no, not kidding) to no avail.  They should have definitely cooked those potatoes longer.  My solution was to cut them up, place them in a bowl and hit the nuke button for three minutes.

Still not soft enough to squash, but I decided to get on with it by dumping in the sour cream, the leftover dill and salt and pepper.  There was no making patties ... it was more like potato salad!  Oh well ... I figured it would brown nicely anyway, because that's where I threw the two pats of butter instead of making dill butter to top the salmon. 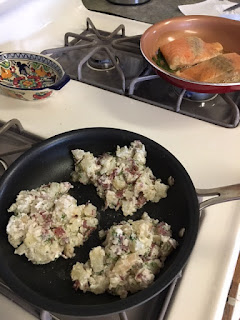 Lastly, squeeze the lemon juice into the salmon pan, reduce for a minute or two and pour over the fish.  Ten minutes later ... VOILA!!!!  Dinner is served. 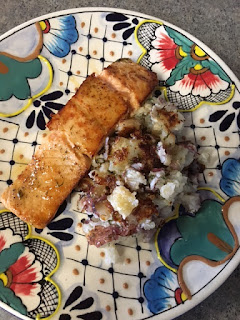 Okay, I admit it doesn't look like the recipe card AT ALL, but mine is on a prettier plate.  Either they used a smaller desert plate, or they had MUCH bigger pieces of salmon. 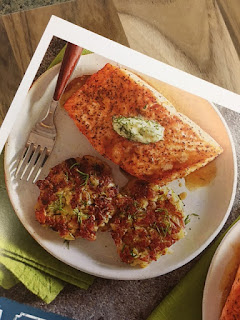 At least it was edible, although I couldn't taste the dill at all.  In fact, mostly all I could taste was WAY too much lemon juice.  You can't hardly mess up fried potatoes, or even the salmon for that matter, and it sure beat Nutrisystem frozen chicken.

I wish I had the organizational skills of this gal.  Every weekend she does all her prep work ahead.  She has chicken for tacos, chicken for enchiladas, chicken parmesan and hamburger for tacos, all seasoned, packaged and stuck in the freezer.  She even cuts up all the veggies required for all those meals.

I tried it once, but always seemed to have a bag or two of chicken left over and no idea what to do with it.  Besides that, I got tired of eating shredded chicken at every meal. 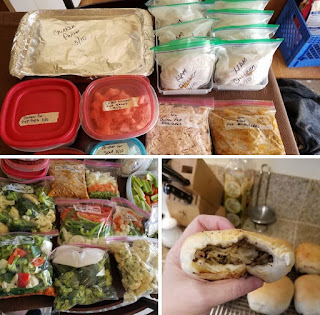 I think I'll take a lesson from dinner in a box and maybe try to make my own.  Of course that requires forethought and lots of list making.  In the end, it might just be cheaper for me to go with the box.