The long ago property shown here is now known as the Longhorn Restaurant.  Although advertised as the Bucket of Blood Saloon, it appears there was no such name on the roster of Tombstone. 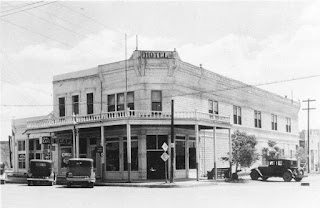 Built in 1881, it became a clothing store before the Owl Cafe and Tourist Hotel took over.  On December 28, 1881 Marshall Virgil Earp was shot with a shotgun from the second story window of this building still under construction.  Luckily he survived, but lost the use of his arm.   The building burned in 1942, to be rebuilt as you see it today, the Longhorn Restaurant. 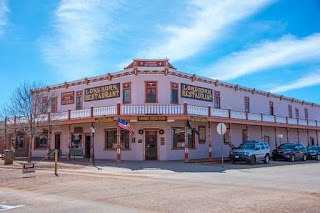 The County insisted the roads, even those not traveled by cars, be paved.  The locals wanted a more authentic look, and so deposited crushed granite atop the asphalt to keep up the old west town facade.  It looks great and I'm glad they did.  Can't you just see Wyatt Earp walking down the boardwalks? 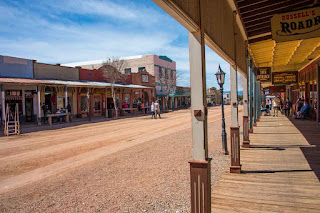 One thing there were lots of around the mines of Tombstone were girlie girls.  Many didn't start out that way, but once you lost your husband, there was no choice if you wanted to eat.  Meet Annie Watson, better known as Diamond Annie.  In 1887 she filed charges against Pete Rude for threatening to kill her.  That didn't help her popularity, and in no time she left the country. 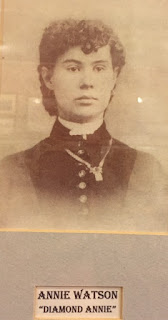 The ladies, and I use that word loosely, had to be licensed to ply their trade.  There are many receipts in the museums, this one being issued to Sadie Jo (Marcus) for working in the Red Light District, in the business of:  House Of Ill Fame.  SIGNED by none other than Wyatt Earp.

Yup ... this is THE Josephine Marcus who was engaged to (and living with) Sheriff Behan when she met Wyatt Earp.  Having run away at the very early age of 14 or 15, she worked very hard to keep that part of her life secret, but we know how she survived.  She lived in Prescott Arizona for a time before arriving in Tombstone at the age of 17 where she was promised marriage by the 33 year old Sheriff Behan.  He reneged on his promise, but convinced her to stay. 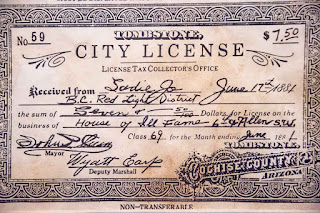 Finally, in 1882, before the famous gunfight, she left for San Francisco, where Wyatt later met up with her.  They remained common law husband and wife for 46 years. 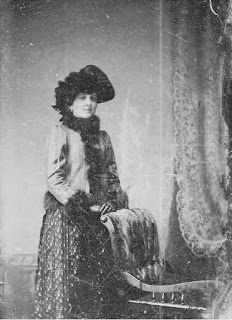 Ida Crowley came to Tombstone from Europe and ended up in the only profession where language wasn't a problem.  Now you may think these "ladies" aren't the prettiest egg in the carton, but the miners didn't care.  It was wham bam, thank you ma'am!  They were only required to take off their hats. 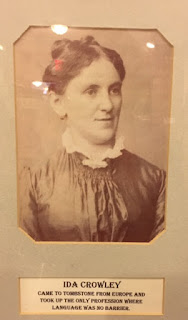 This image is looking Northwest on Allen Street.  The tall sign on the left appears to say McDowell and Stanford, along with a big Restaurant sign.  Further left and out of sight is the Bird Cage Theatre.  On the right is M. Calisher & Co. Lumber.

Eighteen year old David Calisher ran the general store and was picked for the Grand Jury that indicted William Claiborne, but failed to indict the Earps and Doc Holiday.  He received lots of criticism for that, causing him to try and start a fire in his store (or so they say) in an attempt to burn down the town.  He failed, but was actually acquitted before he left town. 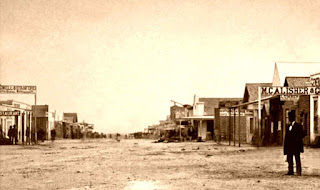 Here's what it looks like today.  Notice there weren't any nice boardwalks to keep your boots out of the mud in the old days. 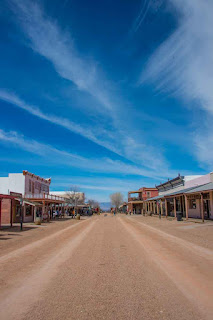 If you're visiting Tombstone, take a drive West (I think ... I tend to get my directions mixed up around here because the mountains are in the wrong place) up Sixth Street towards the RV parking lot.  Continue past the parking lot and up the hill, taking the first street on the right ... Skyline Drive.  Not really a street, it's more of a single car wide path.

You will find this lovely garden art park, built by Morey.  Perched on the edge of the mountain, he has spent many an hour with lots of colorful paint adorning the flotsam and jetsam he's collected.  Notice the sign ... Thought For The Day .... Marry the right person!!  90% of your happiness ... or misery ... depends on this decision.  I have to say he's correct!!

He proceeded to tell me there are five mountain ranges surrounding him.  Let's see if I can remember. The Huachucas, the Whetstones, the Santa Ritas, the Little Dragoons and the Mules.  Hope I did you proud Morey!!  Keep going on the little road and you will end up back in Tombstone. 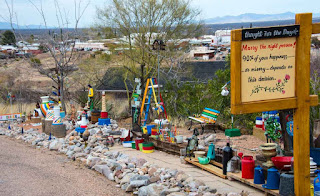 Although in the past I have purchased lots of STUFF in Tombstone, this trip only netted a CD of Indian flute music.  There's nothing more ethereal than listening to this in the desert.  EXCEPT when I got home, I discovered I didn't have a CD PLAYER!! 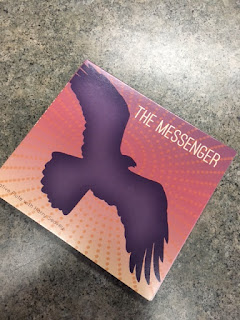 Guess I'll just have to play my OWN music with these flutes I carry in the rig.  If you've ever heard me, you'd mail a CD player to me by overnight mail!! 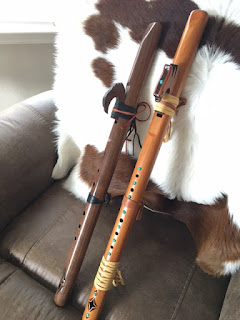 There are a few more Tombstone stories, but for now, I'm just going to enjoy the beautiful desert morning.  Not too hot, not too cool .. it's just perfect!!!