If you are looking for a caving partner, I am NOT the one.  I've suffered from claustrophobia ever since I was a kid and crawled into our Church's drainage pipe while it was under construction.  It was not a good thing.  Still, I'm fascinated by what lies under ground, and so a trip to Colossal Cave southeast of Tucson was in order.  Little did I know the history I would find. 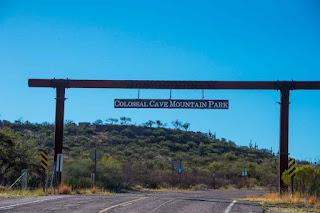 This is actually a 2400 acre park including the historic La Posta Quemada Ranch where you can ride horses, picnic and maybe even eat a chuck wagon dinner.  Now listed on the National Historic Register, I think it is privately owned, but don't quote me on that. 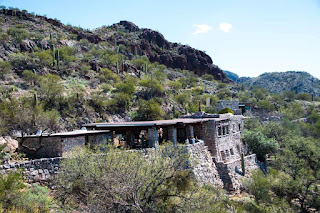 Discovered by Soloman Lick in 1879, the inside temperatures, unlike most caves, remain at 70 degrees.  Leave your coat at home.  The source of water that melted the limestone creating this cavern, disappeared eons ago, making it a DRY cave.  Solomon looks like he was a "jaunty" kind of guy. 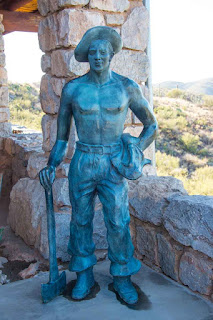 The views from atop the hill are amazing.  Definitely go EARLY in the morning and make reservations if there are more than one of you.  Parking is at a premium since this is also surrounded by hiking trails.  Yes, the road is terrible, but it's good driving practice to see if you can miss all the potholes. 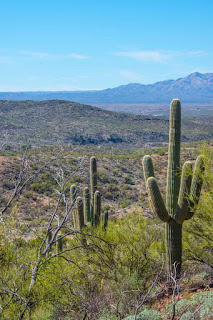 Let me just say it's DARK in there.  Yes, there is a lighted pathway, but the lights are only every 30-40 feet.  Bring a flashlight, which I did not. 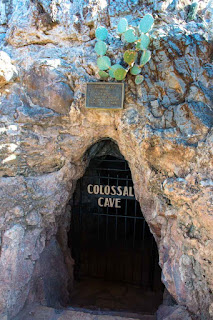 I think the tour lasts about an hour and I saw something about 363 steps.  Unfortunately, there is no wheelchair access, and in fact you should be in kinda sorta good shape. 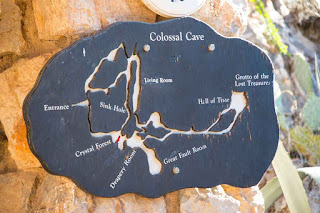 The local Hohokam and Apache tribes used the cave until around 1450 AD.  You can still see the smoke on the ceiling just beyond the entrance. 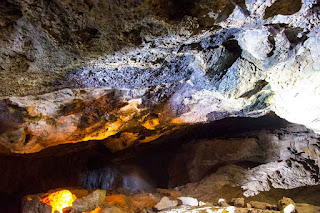 In 1884 four bandits held up a mail train near the tiny town of Pantano.  They absconded with $72,000 in gold and currency.  Nice haul, right?  With Sheriff Bob Leatherwood in hot pursuit, they found and took refuge in this cave thinking they were safe for sure. 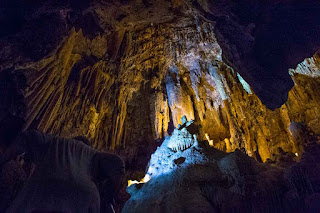 Unfortunately for them, the Sheriff was a good tracker and followed them right to the door.  He decided, as any good Sheriff worth his salt, to starve them out.  After all, they had no water or food with them, just $72,000 worth of treasure. 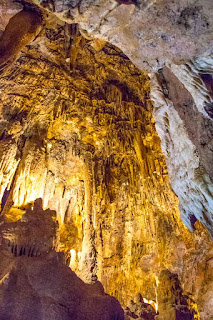 Not willing to die without spending their loot, the bandits were able to find a way out by watching the breeze blow their match flame, or so they say.  Two weeks later, the Sheriff, still sitting outside the cave, got notice the men were living it up in Wilcox, bragging about how they got out the back door. 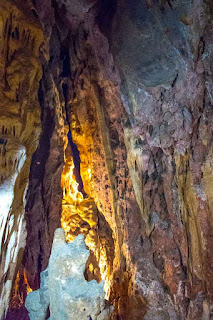 The Sheriff hightailed it over to Wilcox where he shot three of the four, sending the last guy Phil Carver to prison.  Then he commenced to searching the cave for the money.  They found the campfire, some clothes and even the back entrance, but never did see any of the cash. 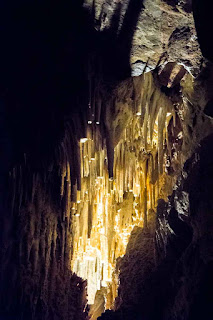 Eighteen years later when Carver got out of the Yuma Prison, he headed straight for the cave, sidestepping the Sheriff, and supposedly left several empty mail bags as he rode off into the night.  That's a really good story, right?  But it may not be exactly right. 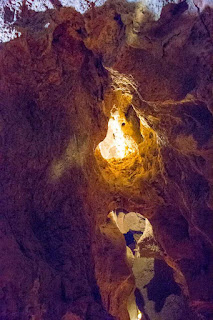 True, in 1887 there was a train holdup with lots of explosives, but the bandits didn't get away with all the money.  It seems many bandits used the Mountain Springs Ranch (La Posta Quemada) as their headquarters during their stealing years.  There were many more holdups, but I'll tell you about them tomorrow.  Otherwise, you'll be reading this at 10:00 tonight!!