They tell me it's spring.  In fact, two days ago was the FIRST day of spring, meaning we should look for warmer weather.  The weather guessers were correct.  It's been absolutely gorgeous here with temps in the 70's.

That being said, I guess it's time to get to work outside.  But first, I've been climbing Mount Whitney every morning, a feat that has me falling asleep WAY too early every night.  With all the ads on TV about working out 14 minutes a day, I decided to give it a shot.

Truthfully, my treadmill won't go up quite that high, but it sure feels like it when you are gasping for air.  I was hoping to GAIN energy, but it just seems to make me fall asleep.  Probably not a bad thing considering the trains.

Anyway, my first task of the day was to spray the entire outside with Home Defense.  I've no idea if this is comparable to Pest Control services or not, but it sure seems to work in California.  I've killed tons of black widow spiders outside and have never found one inside.

I checked into hiring a service, but they were ridiculously expensive at $100 a month with a 13 month contract required.  Seriously???  As an added incentive, they said German cockroaches were on the rise and if I shopped at any Thrift Stores or grocery outlets, I better be prepared to be overrun when they came home in my purchases.  WOW ... that's a new tactic I hadn't heard before!!  The answer was still NO. 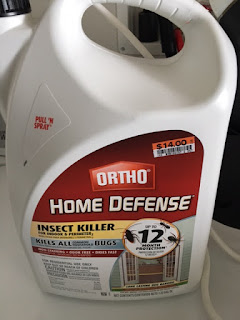 With that done, it was time to mow the lawn.  Thankfully the previous owners left their electric lawnmower.  Electric as in you need an 80 foot extension cord in order to use it.  You and I both know that some day I'll run over that baby and shock myself silly, but it's all I have. 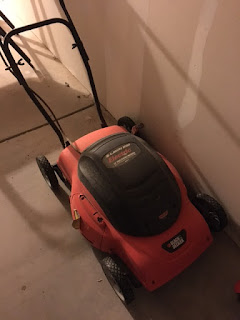 Not a really great lawn .... what can I say, it's in the desert .... but the puppies love it.  Spring is also the time to cut back on water so it doesn't grow too much.  I'd rather not have snakes hiding in the grass upon my return. 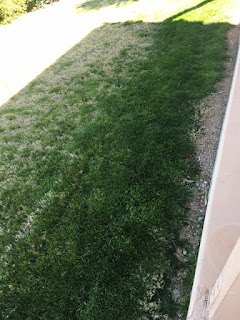 Spring also calls for barbecues.  It's almost time to hit the road again so I decided to barbecue a chicken since I won't have room in the freezer.  My first try at this was a BIG hit!!  My second, a BIG FLOP when the gas canister ran out of fuel. 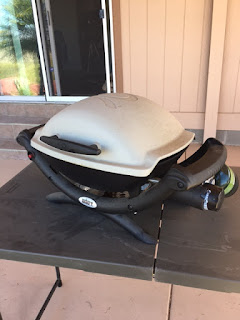 So here we are with the third try.  It looks nice and the temperature was an acceptable 165, but I think I should have left it a little longer.  It was mighty tasty, tender and juicy, but a few more minutes would have helped make the skin crispier.  I can only thank George from Our Awesome Travels for posting his recipes.  Winner winner ... chicken dinner!! Sadly it's time to begin packing again.  Lucky for me, this time only requires about twelve trips to and fro.  A few clothes, the puppies and of course Jonathan, along with provisions are all that's required.  No worries though ... there's still time for one more quilt show and one more fabric run.