It's too bad we don't have smell-o-vision so I could give you an idea of the wonderful homecoming I had yesterday.  But first, sometimes California can have nice sunsets too, as reflected in my rig ... don't mind the dirty stripes down the side. 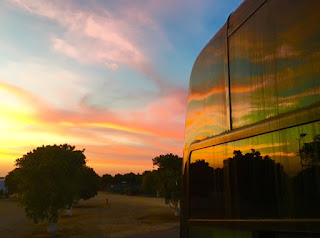 After a quiet night in Bakersfield, I decided to fill my propane tank while it was convenient.  I drove up to the tank at 7:30 and before I got out of the rig, there was a nice young gentleman waiting for me.  Fill 'er up!

Sometimes chit chat should be kept to a minimum.  In no time I knew he had worked the oil fields of Wyoming.  He didn't get hired on in Alaska because he was a felon, finally ending up in Bakersfield.  Ok then ....... I double checked everything and locked my doors.  Really, he was a nice guy, clean cut ... I'd hire him too.  Fourteen gallons of propane came to $37.

I made the mistake of leaving my camera on the table out of reach, so the only picture I got was of the Halo's building.  I love this building/advertisement.  Not that there was anything else to take pictures of, because there wasn't. 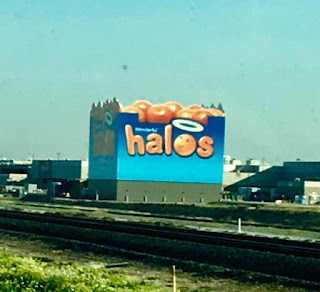 On the last leg just into town, all of a sudden there was a big WHAP that covered my entire windshield!!!  It was like I drove though a curtain of rocks and scared me to death!!!   It took me a couple of seconds to figure out I had hit a HUGE swarm of bees.  I mean to tell you, their dead bodies covered my entire window, along with guts and blood.  What a big mess that was!!

The wind went out of my sails.  Now I had to wash the thing when I got home.  RATS!!  At long last I pulled into the driveway.

Ten loads back and forth to the house later and I required some coffee to keep me going.  What the heck?  I can't see in my microwave.  Apparently the light has burned out ... no surprise since it's probably 20 years old.  Still works like a charm but I couldn't even figure out where the light WAS.  That's when I noticed every battery operated thing in the house had dead batteries. 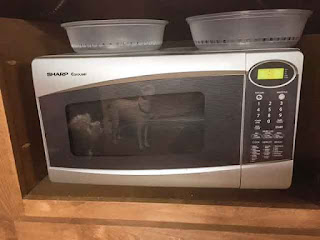 I needed a pepsi (even if it was outdated by two months) ... so I opened the freezer to get some ice and I can't get the door open.  WHAT?  Wish I had taken a picture, but the ice maker door was covered with four inches of crystalized ice attached to the ice bin.  I've no clue, since the ice maker was shut off when I left.  What next???

RIIIIIIPPPPPPPPPP .... okay, that's enough for one homecoming.  It's hot here, so I changed to my shorts after washing the rig windshield.  Yup ... caught my foot in a tiny opening and ripped the entire hem off one leg.  Irritated, I chopped off a piece of fabric and sewed it to both sides, zig-zagging the entire seam SHUT!!  Take THAT!! 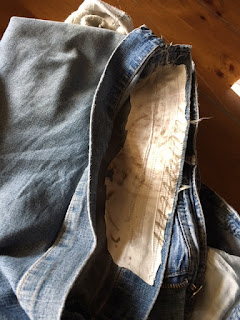 I plopped on the couch and figured to watch television for the rest of the night.  NOT!!  It said it needed to be reauthorized.  Two phone calls and an hour later, I finally have my TV back.  I wasn't going to ask what else could go wrong ... I just snuggled with the puppies.

In case you want to know what the moon looked like last night, here it is at 3:28 am.  As usual, any house locked up with no air circulation for several months is going to smell bad.  Too bad they don't have smell-o-vision so you too could be wafting in the breezes of stale, slightly moldy air, mostly because I forgot to dump the last bit of trash in the kitchen. 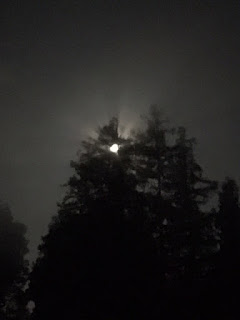 I have a pretty good smeller.  Things will wake me up in the middle of the night because of the smell ... like neighbors burning, errant fuel, a sick dog.  You can imagine I didn't sleep a wink with the yucky smell, so I finally got up, grabbed my trusty can of Lysol and sprayed the entire house.  I also turned on two of those candle smelly things.  As I looked outside, the full moon was behind the trees.

It didn't really help and I never did get back to sleep, but at least I felt better for the time being.  Today will be spent scrubbing down everything and vacuumimg while the fan runs with the windows open.  Hopefully that helps.  In the meantime, I discovered I grew a healthy crop of daddy-long-leg spiders on the living room ceiling.  Time to don my battle armor for another siege.