I can't believe I've been home almost a month and it's time to start planning the next adventure ALREADY!!  We're not even done with Thanksgiving, let alone Christmas, but if I don't get my act together, I'll be late for a very important date ... in Pasadena for the Rose Bowl Parade float preparation activities!!  I'm getting exited about this one for two reasons:  one, I've never done anything like this before and two, I've never been to the Rose Bowl Parade before!!

I spent a couple of hours on the computer this morning checking out the best route to take.  This is an easy one ... straight down I-5 to Glendale, which thankfully is WAY before the mess of Los Angeles that we drove through in April of this year!!  That's definitely a PLUS!!  I checked out the satellite images of the Elks Lodge where I'll be staying ... that way I know which driveway to enter and how to get out.  I learned this summer that it's good to know if there's room to turn around.  Not ONCE did we have to unhook and do the RV dance to get out of a lot thanks to Barbara's satellite map skills!!  I'll be working on Phoenix Decorating Company's Western Asset Management Float called The Power Of Imagination.  Anyone can volunteer to help decorate ... I'll get all the information I can in case anyone wants to help out next year!!  This is not the HOP the Escapees group puts on ... that's something totally different and I hear a pretty expensive proposition.  What I'm doing is a totally private operation, so lets hope I don't get myself into too much trouble!!

Yesterday my new San Francisco Giants Jersey arrived.  Since I have been a season ticket holder, they have won the World Series three times ... and I have a jersey to celebrate each one.  Here's hoping there will be many more!!  Seems we are on a roll!!  When MadBum first started pitching for the Giants, I never thought he had it in him to be the best of the best.  In fact at first, he wasn't very good at all.  Just goes to show you never judge a book by it's cover ... or the first 10 pages!!! 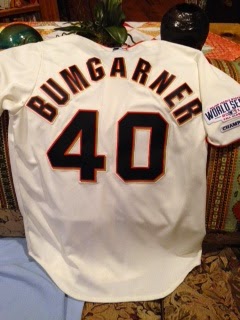 I'm still unloading the rig from my summer trip.  Today is the day to start it up and let the engine heat up, as well as the generator, then I will be able to move forward and open the last slide (I parked too close to the horse trailer) and remove the last of the clothes and all the things I stuffed in the closet.  Some rearranging is in order since it's going to be cooler on this trip and I need at least three blankets!!  Not for me ... for the puppies!!  Once all the laundry is done, I'll start packing her up again.  Then it's food inventory time.  Since we ate out so much this summer, I have lots of canned goods that are going to expire.  Guess it's going to be chili, black beans and corn for me the next few days.  I still need an oil change and a generator service, but found a Cummins Coach Care in Bakersfield where I can stop on my way down to Glendale, if I don't find anything else sooner.  From Glendale, it will be on to Indio for the WMHA Rally, a Golden Spike Rally and finally Quartzsite!!

Here was an interesting find in the garage ... at least for me.  How many people can say they still have the curtains from the bedroom when they were 4 years old??  I have no idea why I kept these after all these years.  I just loved them so much ... they represented adventure!!!  They hung in the top floor of the 100 year old ranch house we lived in 60 years ago.  Made of durable almost canvas-weight cotton, I washed them yesterday and they came out like new.  I'm thinking this will make a GREAT quilt to pass down to someone!!  Weird the things you hang on to. 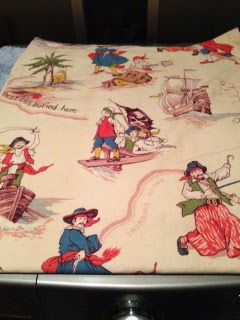 This morning will be wash-the-rig-day also.  Definitely not a job I'm looking forward to, but someone's got to do it, and as I look around, I'm the only one here!!  Except for the puppies, who make a good audience!!  Let's get to work ... we're burning daylight!!! 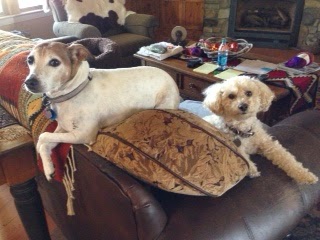 Posted by Nancy Kissack at 7:22 AM