I've tried to ignore this Ferguson mess,  but it was the talk of Bingo night at the Elks Lodge.  There are many different ethnic groups, that come from just as many different economic levels, attending our little gamboling parties each Tuesday, so I was pretty eager to hear the talk.  I even started a couple of conversations so I could see what the reaction was here in central California.

Not one single person thought the Grand Jury decision in Ferguson was incorrect, wrong or unjust!!  As I listened to the talk, people were saying how they thought it was totally crazy of those people back there to pillage and burn in their own town.  The law is the law ... you do what law enforcement tells you to do or you suffer the consequences.  Course none of us were there and the Grand Jury is the only one who has seen and heard all the evidence.  Most of our players were proud of the Grand Jury for not caving in to the wishes of those rioting, the rest were just glad it wasn't THEM on the jury.

I was not expecting to hear this.  For once, it made me proud to be from California.  On my recent trip to Maine, we passed very near Ferguson, and from what I saw, the Civil War is NOT over, no matter what the history books say.  Even the plaques and monuments lay blame on the "other side" for just about everything.  The Westerfields and I checked out many of the statues, museums and local history, to find the finger pointing and blame still raging in the midwest, so I shouldn't be surprised to see this kind of behavior.  But here's the deal folks ... the law IS the law, and if you're breaking the law or acting in a threatening way toward the people who are charged with enforcing the law ... the outcome is all on you.  You can stop what you are doing and act like a reasonable person, or you suffer the consequences.  To then riot and burn businesses in your town because you don't like the decision your peers made regarding the lawfulness of the consequences, is only hurting yourself, resulting in disgust in the minds of most, as well as lessening the sympathy you might have received otherwise from across the U.S.

I just don't understand their motives behind all this ... and I don't think they do either!!  Will this change the laws?  Will rioting change how they are treated?  Will this get them a big money settlement?  What about all the innocent people they are hurting in the process?  Just what ARE they thinking??? 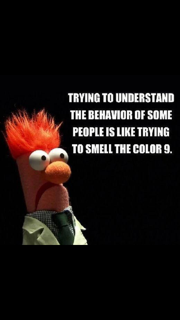 Posted by Nancy Kissack at 7:46 AM