It was a good day in Smallville yesterday, with the exception of the much anticipated berry pie.  As you probably know, I watch a lot of cooking shows, trying to improve my skills.  So far I haven't had much luck and yesterday was no exception.  It was Giada's recipe that I tried ... it looked amazing and weighed a ton when it was finished.  Off to the oven!! 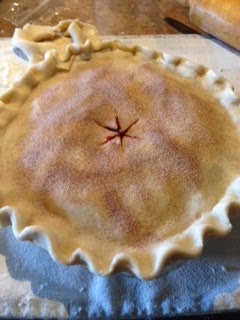 Did I mention that I LOVE this Breville oven, first used and recommended by Miss Terry, beautiful wife of Nick Russell, secret agent from Australia (but that's another story) ... anyway, this oven is a keeper!!!  Unfortunately the recipe is NOT!!  It has WAAAYYY too much cinnamon and not near enough sugar.  It's still sitting in the fridge with only one small piece missing. 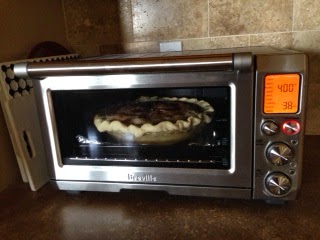 I finally found a local contractor ... he's so local he lives about a mile away.  I know him from my old days working for the Building Division, issuing permits.  He's going to make the repairs on the ranch rental house, but in the meantime, I talked him into installing a 50 amp RV plug on the back of my garage.  The Kissack Adventures RV Park is now open for business!!  It's a good thing I stressed that it needed to be an "RV" box (new info added to my brain on the last trip)! 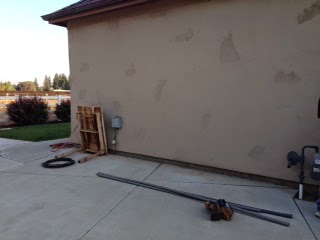 It's funny how we depend on electricity.  While he worked on the panel, he of course turned the power off.  I went inside and tried to sew ... iron ... microwave and internet search ... none of which worked.  There's no power, girlfriend!! 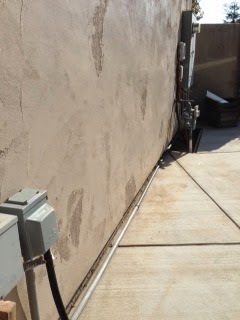 Okay, how about grabbing the broom and cleaning up the spider and ant mess at the front of the garage?  As I reached overhead, I caught a flash of three black dots, just before they fell on my head.  I panicked while those VERY FAT black widows danced in my hair.  THAT got my heart rate up!!! 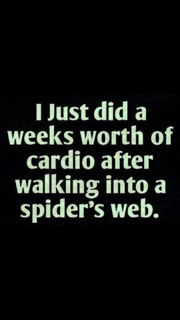 At any rate, the box was installed and I'm in business.  Unfortunately I forgot about the breaker, which is in the panel 20 feet away.  I was trying to be a nice girl and keep my nose out of the "man" business of installing the box.  I'll just post a note on top to flip the breaker off before unplugging.  It probably would have cost me twice as much to put the breaker at this end of the box. 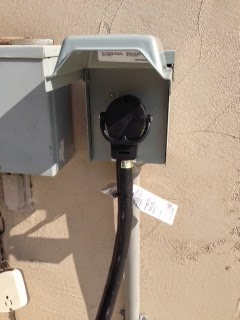 Then it was on to the garage cabinets.  While waiting for two other guys to show up, Dave and I were able to lift the front just enough to get a 2x4 underneath, raise it up two inches and empty the cabinets.  It's funny they fell because really, there wasn't much heavy stuff in them at all!!!  Too bad the cabinets broke up so badly.  Lucky for me this contractor had several pieces of this material to replace the badly broken panels along with a very cool nail gun to put them back together. 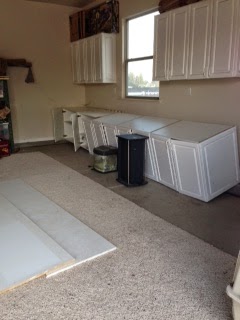 I knew this doll was hidden in one cabinet, so I got her out and brought her inside.  Her name is Wilhemina Rosella Theobald.  She's a wax over paper mache doll made in 1850 Germany.  She lived in a very rich household, where a French seamstress was hired once a year to make dresses for the lady of the house and her daughters.  The seamstress made the clothes for the doll at the same time.  The body is made of cotton, stuffed with straw and is probably worth a fortune by now.  Maybe I should take her on the Antiques Roadshow!!  I have a letter written by my great aunt with the names of the family.  I think I'll see if I can find them on the internet. 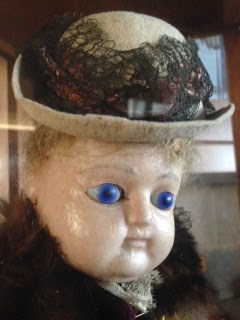 With everything removed from the wall, they built a 2x6 frame on the floor to support the cabinets.  They separated each one and repaired all the bad spots, set them in place and screwed them to the wall ... not that it needed it with a solid foundation underneath. 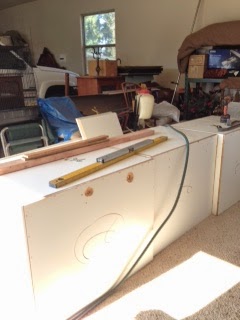 They even fixed the broken door and noted the hinges for these cabinets probably cost more than the cabinets themselves!!  It's weird what people spend money on when they build a house.  At least I know the doors will break before the hinges!!   Of course that means it was time for me to actually rummage through all the junk ... I mean good stuff ... and determine what would go back in.  I imagine this repair is going to cost $300-400, but it was worth it.  I got pretty friendly with one of the guys who gave me his phone number.  No ... not for THAT ... but he said if I have "honey-do" stuff, he'd be happy to help out for a couple of extra bucks, since the construction business is in the toilet.  Speaking of which I need some bathroom plumbing fixed.  Anyway, now I have a REAL contractor AND a handyman. 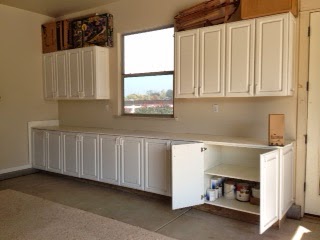