Happy Halloween to everyone!  Hope your grandkids scored big time ... or maybe not if you are babysitting sugar-infused children under the age of ten!!  Halloween is my favorite holiday, but this year I fell behind and barely got a few decorations on the front door.  At least I remembered to buy candy ... a good thing since I had more trick-or-treaters in the rain this year than I have ever had.  Parents were running around with umbrellas, but the kids could have cared less.  With dripping makeup and soaking wet clothes, they were after the CANDY!!!

When I thought they were all gone, one last van pulled up in pouring rain, prompting Jessie to come unglued ... she doesn't like cars in the driveway!!  I grabbed my candy can and stood outside as one after another, kids began climbing out of a large SUV ... SEVEN of them, all under maybe 8 years of age.  Honestly, after four, I couldn't see how there could possibly be any more.  I thought we were done as I closed the door, but Jessie began her barking ritual again.  I opened the door to hear one little drenched girl saying ... ONE MORE! ONE MORE!!  The fairy princess didn't get her candy.  Sure enough, the fairy princess in her beautiful pink wet dress came running up.  She was more fascinated with Jessie than the candy ... and not the least bit scared of all the barking.  Mom said she LOVES puppies, as the fairy princess knelt down beside the door and petted the glass.  Jessie quieted down and Cooper gave her a through-the-glass kiss.  How cute was THAT!!!!  It took them 5 minutes to get her back in the car, as three had to jump out to let her in.  They made my day!!

This is my next year's Halloween costume ... tattoo anyone??? 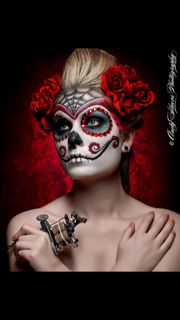 Early yesterday morning, I put my two big pork butts in the smoker.  Being lazy, I didn't mix my own seasoning, but used a prepared one.  Not such a good idea ... it's pretty spicy hot on the outside!! 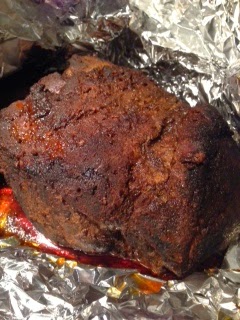 I think my cooking itch has been satisfied for awhile ... just too many burials!!  This came close to being another one.  After seven hours of cooking, I walked out to check the digital time and temperature (which I had done one hour earlier), to find the door wide open.  What the heck?????  Geeze Louise, this isn't good at all.  How did that happen??  I shut the door, only to have it creak open again.  This time I blocked it with a large sprinkler head and calculated the time and heat loss.  By 10:00 pm, there was no way it was going to be done, so I doubled wrapped both big butts and put them in the oven at 180 degrees until 5:00 this morning.  Both came out just fine ... whew, that was a close one.  This wasn't just $5.00 worth of pork!!  Since one butt is going to a friend's house, I thought I better make sure it wouldn't make them sick ... so I had pulled pork and eggs for breakfast.  So far so good!!! 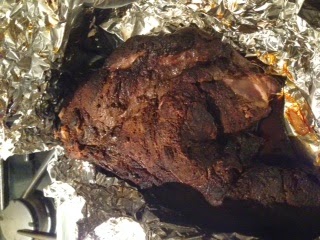 I saw this posted on the internet yesterday ... my thoughts exactly.  I've been stomped on by cows, bucked off horses too many times to count, survived hair-raising motorcycle rides, zip-lining in Costa Rica (not to mention the jungle part) black widow bites, jumping off a 60' tower, three marathons in the hills of San Francisco and driving a 15+ ton motorhome over 28,000 miles ... and I'm still kicking!!  Up until now, I could also boast no broken bones in all of this.  This will be me, sunning on the porch with my sweet tea when I'm 90!! 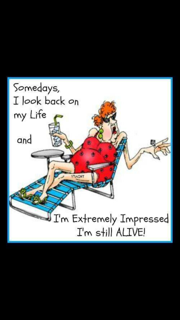 I'm off to Bearly Quilting in Sonora this morning.  Maybe if I'm quilting, I'll lay off the cooking for awhile!!!

Posted by Nancy Kissack at 6:52 AM