Chicken rates pretty high in my house!!  I can easily pass up steaks and beef in general.  Why you ask??  Because I was born and raised on a cattle ranch.  That means "what's for dinner" was beef, as well as breakfast and lunch.  Not meaning to be gruesome here, but when a cow dies and you know why, she ends up in the freezer.  Cattle aren't exactly the brightest crayons in the box and occasionally try to jump the fences, which never worked out well for the cow ... or us for that matter, because we had to drop everything to butcher, cut and wrap the meat.  Nothing went to waste in those days, since cattle ranching was on the downhill slide.  That meant we had LOTS of beef for every meal.  Tough steaks, terrible tasting hamburger ... we called it green meat, meaning it was raised on green pasture, not nice sweet corn like nowadays.  The easiest way to cook this green meat was to broil it.  I can't tell you how many times we had broiled meat for dinner, but it was enough to change my adult eating habits forever!!

Thus the chicken (or turkey) is at the top of the list in my book.  Yes we did occasionally have chicken as a special Sunday dinner, but it was also pretty gamey, having just come from the barn.  Probably most people aren't familiar with the Ranch lifestyle, but that's the way it was for me growing up!!  We rarely went to the grocery store ... we went to the freezer .. or the barn.

I've eaten chicken lots of ways, but yesterday was the most amazing chicken I've ever had ... and I'm proud to say I COOKED IT!!  Yup ... I did!!  I'll probably never buy another whole roasted chicken since NOW I can do it myself!!  The only problem that arose was my oven not coming up to temperature.  I have a huge oven that takes 30 minutes to preheat and a smaller one which I use ALL the time.  I'm pretty sure the temperature in the smaller one is why my cookies haven't been coming out as I remember ... so I bought a thermometer to place inside ... not that I would depend on it, but it would give me a good idea of the correctness of the oven.  Turns out it was over 100 degrees off!!!  Well for heaven's sake ... that's not good!!

While I waited for the BIG oven to preheat, I prepared the chicken ... a big beautiful 5 pounder!!  I put a whole lemon (cut in half) inside, along with lots of salt, pepper and thyme.  I also cut an entire head of garlic in half and placed THAT inside before putting more salt, pepper and butter on the outside.  I cut up carrots, celery and onions for the bottom of the pan, doused it with olive oil and more thyme before placing the chicken on top, and baked it at 425 for 90 minutes.  Seems like a lot ... but it was absolutely PERFECT!!  Yay for me ... a baking SUCCESS!!  I was dancing around the kitchen like a little kid!! 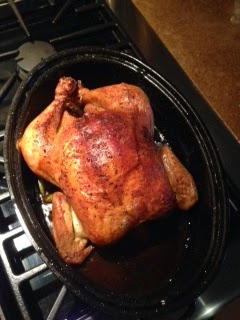 To make it even better, the vegetables were sooooo tasty and there were lots of yummy looking drippings in the pan.  Hmmm maybe I'll try to make gravy.  It'd be a shame to dump all of this beautiful stuff in the garbage ... and so I tackled the gravy.  Turned out the best gravy I've ever made!!  It was a good day for cooking in the Nancy household!!  Here's hoping I have a repeat performance on Thursday when company comes for dinner. 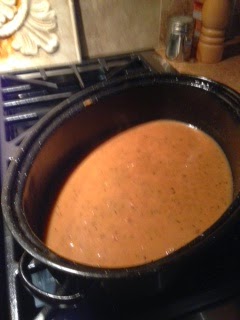 Now to figure out what to do with the remaining four pounds of cooked chicken!!!

Posted by Nancy Kissack at 8:12 AM