It's A Beautiful Thing!!

Not much going on here in Smallville.  My last Elks Lodge Bingo night was an eye opener.  Just when you think you've got those guys trained, you take a little short vacation, only to return to chaos!!  I found they weren't counting the cards being purchased, were giving away free games and not balancing to the tune of $100-200 a night.  Time to get this place ship-shape before I leave again in January!!  Now I'm not saying ALL bingo players try to get an advantage on the game, but it's amazing how many times they "count wrong" or "those packets stick together so bad".  When I find they have stuck extra sheets inside the game books, it's pretty obvious!!  As I cashiered, the new volunteer would whisper to the players that he was told he had to count the cards, as he rolled his eyes.  Sheesh!!!  This isn't give-away-free money night ... well it is, but you know what I mean!!

I've been to the grocery store three times in the last two weeks, which has just about broke the bank.  My freezer is stuffed to the gills with three large turkey breasts for smoking, along with a 14 pounder from the Elks Lodge as a thank you for volunteering.  My counters are covered with boxes of stuffing, cans of pumpkin pie mix and cranberry jelly.  Sunday morning will begin the countdown as the turkeys come out to play in the fridge for three days before getting a relaxing massage with all things sugary-sweet and spicy, before hitting the sauna!!

Yesterday morning I received a phone call ... the kind where you don't recognize the number and don't really want to answer because it's SURE to be a salesman.  I finally answered to hear the voice of the gal from Vintage Market where I purchased that beautiful cabinet.  I made a quick stop a couple of days ago to measure and see if it would fit in the back of my pickup.  My plan was to leave it loaded on the truck but parked in my garage until I could con someone into helping me unload it.  Turns out it was the lady who refinished the piece ... and she wanted to know if she could deliver it last night!!  Well I don't know, I do like the challenge of seeing if it would fit in my truck as I ducked around the rain clouds on the freeway, unable to unload it when I got home .... YES OF COURSE I would like you to deliver it!!!  That's WONDERFUL!!  And so they did!  It was a beautiful thing when placed in it's new home.  I actually had not seen it with the doors on and didn't even know it had lights inside.  It's gorgeous ... I love it!!  Doesn't exactly match the brown walls, but they are paintable!! 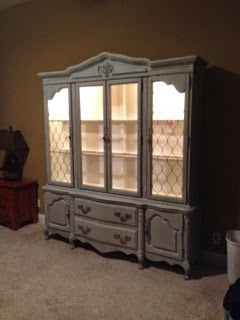 I gave them a big cash tip as they left because it wasn't easy at all to get it in the bedroom due to the length and height, even though it is actually two pieces.  It's a good thing I have nine foot tall doors in this house!!  Now to fill it with beautiful fabric, most of which I already have stashed in every corner in the house from the Alaska trip!!  On her way out the door, she mentioned the new FRENCH piece she was replacing it with.  French piece??  Really??  I bet it's a beautiful thing!!!  Maybe I'll just go look ..........