Is this what it feels like at your house??? 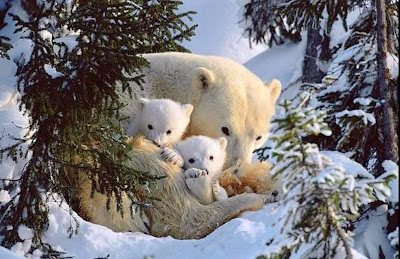 At least these guys look warm and cozy.  Having just returned from Costa Rica where the temperatures never dropped below 85, it's quite a shock to have 25 degrees at night and highs of 45 in the daytime.  Two weeks in the jungle was just enough time to get acclimated.   Looks like we are in for 4 or 5 more cold days before it warms back up to 36!!!!  I'm wearing two pair of socks, two shirts and my heaviest sweatshirt around the house.  Yes, I suppose I could turn the heat up above 65, but I would be contributing to PG&E's Christmas party more than I can abide!!

I've spent the last two days putting out fires ... literally!!!  There was a chimney fire in my rental house. When it rains, it pours.  Why is it that MEN just can't build a small fire??  Why do they have to build huge bonfires in the wood stove??  I won't know the final damage until next week when the chimney sweep comes to clean up the mess.  The fire department told the renter he could continue to burn since it didn't appear there was any damage.  Thanks guys ... I'm betting if it was YOUR house you might have something different to say.

With the FMCA Rally in Indio coming up, I'm making up lists and checking them ten or twelve times!! I think I've already seen a few good reasons not to do THIS again.  The good news is that THERE WILL BE ICE CREAM!!  At least the Schwans Rep, when told the story of last year, PROMISED me it would all be okay!!   I've scheduled several days for cooking treats I plan to take to the rally.  Shhhh don't tell anyone!  It's a secret ... just in case they don't turn out as yummy as I expect and I have to have a funeral in the back yard!!

The last couple of days I have also made four trips to the post office ... or rather Mailbox Express.  You know how you order things and it's never quite right??  That's me ... I should finally learn my lesson about not ordering clothing, because it NEVER fits and always gets returned!!  Then there's the gift that wasn't quite like the description ... and the one I ordered new that came used!!  Typical Christmas stuff!!!

Posted by Nancy Kissack at 6:55 AM