I just hate that manufacturer's don't build quality, long lasting products any more.  They seem to build them to last 3-4 years, if that long, before they crash and die, forcing you to buy another one.  People used to be proud of the fact that their products lasted many years ... but now they just plan for it to quit working so you will buy another one, putting more cash in their pocket!!  I'm not sure if that is due to cost cutting or the workforce.  Either way, I don't like it!!

My original washer and dryer was a $400 Kenmore set from Sears ... it lasted 22 years.  The washer still worked but the dryer took 3 hours to dry a small load of towels.  My PG&E bill was suffering!!  After I moved to the Ranch, I purchased another Kenmore set, 7 years ago for $800.  Last week, the dryer started complaining loudly with beeping noises until it quit altogether.  Really???  I hardly even use them ... I wash maybe two loads a week!!!  At $500 for repairs, I did what the manufacturers count on ... I started hanging all my wash in the back yard!!  Needless to say, that didn't last long before I purchased a new set at TWICE the cost of the last one.

This time however, I went on-line and looked at all the reviews on every make and model.  These are LG's ... one of my friends has been using these for 4 years and she loves them.  This was the only manufacturer that had 5 star ratings on everything. 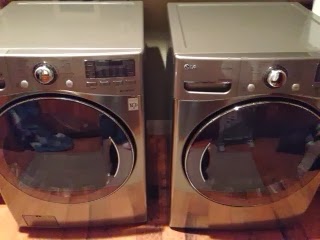 With all the other rental expenses, I really wasn't looking to spend a lot of money ... and lucky for me, they were having a BOGO half off sale.  Even so, they were VERY expensive!!  Don't even think that someone is going to inherit these babies ... I plan on living long enough to get my money out of them ... I'll even split the loads and do FOUR a week ... assuming they last longer than the last set!!!

My friend had a 2008 SUV from a local dealer and granted, it wasn't American made, but it was affordable for her.  69,000 miles later, the engine blew up to the tune of $6,000 in repairs.  Her vehicle was valued at $4,000 and so she really had no choice but to purchase a new one!!  She doesn't even really like it ... the interior space is much smaller than the old one and her dogs are cramped in the back seat ... but it was affordable!!

My iPhone 4 cost me a chunk of money ... and it needed to be updated constantly.  It finally got so slow that I couldn't send messages ... so I did what they count on ... I quit upgrading.  The problem with that was the harassment I received from NOT upgrading.  I finally gave in and purchased an iPhone 5 ... which I have already had to upgrade twice!!!  And of course, it is getting slower and slower.  It's not even one year old.  I think the upgrade contains so much extra #@%$ that it overloads the memory ... and there you have it ... you need a new phone!!

My computer wasn't very old either ... and since I did the upgrade, certain things have slowed down, which again I think is a memory problem.  I deleted 2600 bad images in the hopes of freeing it up, but that only helped the storage space ... not the current memory.  I'm not sure if I CAN upgrade the memory in this machine since I purchased it with the maximum.  Looks like my computer may be heading towards obsolescence!!  I better start saving my pennies!!!