I never did find out if Santa made it around the world ... I crashed about 10:30 pm after defrosting and seasoning the 8 pound turkey breast I planned on smoking for Christmas dinner.  Cooper was up early and nosing around the tree until he found four new balls for me to throw.  Sweet Jessie would have stayed in bed all day!!  Especially since chasing the goat last night!!  The two puppies and I spent a quiet but busy Christmas day together, baking and watching The Mummy Marathon on TV!! I let the turkey sit out for 30 minutes before placing it in the smoker at 220 degrees with lighter flavored Cherry biscuits for smoke.  It should take around 5-1/2 hours to cook to 170 degrees, then another 45 minutes wrapped in foil.  With that done, I started in on baking for the New Year, in between throwing the ball.  Baklava was a big hit and is on the menu again.  I just wish it didn't have quite so many calories. 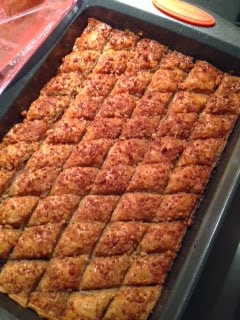 Next up the sweet rolls ... cinnamon and nut filled puffs of dough, soon to be covered in frosting!!  I know ... I got a little distracted between checking the turkey and throwing the ball, so I let these rise a little too long.  No matter ... into the oven they go!! 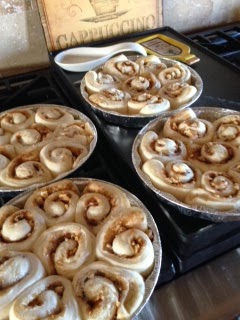 Twenty minutes later ... YUM YUM!!!!  Only 10 more pans of rolls to go!!!  I think it should take me about three days to finish baking the lot.  Then it was more ball throwing, or kicking as the case was. 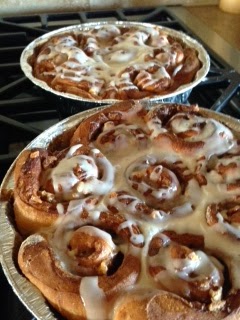 By 1:00 the smoked turkey was done to perfection.  I found it much easier to buy these beautiful 8-10 pound bone-in turkey breasts ... when done, you cut the two huge breast pieces off and carve it up into nice 1/2" thick slices.  An interesting thing, leftover frozen turkey isn't all that great as far as I'm concerned ... but leftover frozen SMOKED turkey is just as good as the day it was cooked!!!  Half of this is going in the freezer!!   Hmmm maybe I should have given Cooper just ONE ball, she mumbled as she threw it for the hundredth time!!! 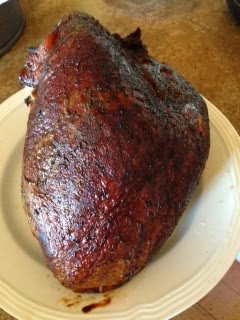 Still trying to remain on a diet ... regardless of how many cookies and pieces of baklava I ate ... I kept it simple.  Mashed potatoes with a little butter ... okay, a tablespoon of butter!! ... roasted vegetables and two beautiful pieces of turkey.  It was awesome ... and the puppies thought so too!!! 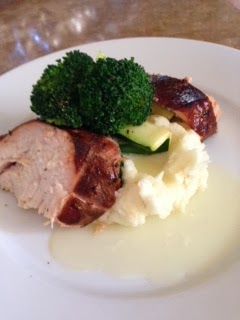 Two hours later, having cleaned up all the dishes from the days baking and Christmas dinner, I sat down to relax with the last Mummy movie ... but Cooper was having none of it.  By now, Jessie is in the act too, so for the next couple of hours, I'll be throwing the balls (into the trash bin)!!!

I hope you had a great day with family and friends ..... Merry Christmas Everyone !!!