Kid Photography ... Patience is a Virtue!!!

One of my best friends grandson is a cutie patootie.  Dad is a Chef part time and works at a Winery full time.  Mom requested some photos of "B" in a chefs hat, cooking ... so we set out to do just that.  Armed with a white T-shirt, a rolling pin, pepper mill, salt shaker, baking powder, powdered sugar, honey, baby bottles, milk, cookies, chocolate, bread, blankets, squeaky toys, high chair, diapers, more clothes, rattles, lights and camera .... we set out to take a few images. 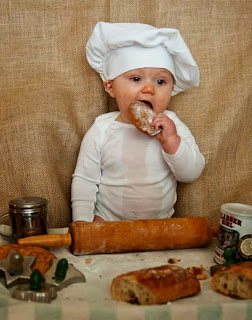 We tried sitting, kneeling and standing in the high chair ... we just couldn't get it right.  The idea was for him to hold the rolling pin and put his mouth on it.  You can just imagine how hard THAT was.  Usually kids put everything in their mouths ... but "B" opted for cookies and bread.  If you took those away ... which we did ... he yelled!!!  We doused that rolling pin with everything from powered sugar to chocolate ... and he was having none of it!!! 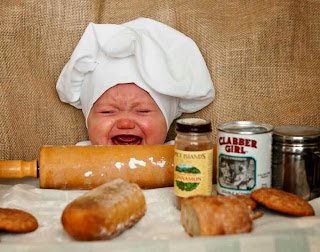 I finally retrieved my antique cookie cutters from the storeroom, and that helped a little.  He's licking powdered sugar from this lips here!!! 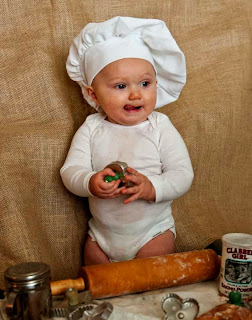 Almost two hours later, we hadn't accomplished much ... so I suggested we sit him on my counter with everything at his feet ... maybe he would be more apt to play with them.  Sure enough, he finally became curious about all this stuff stacked on his legs and started to play.  In between a few crying sessions ... we bribed him with cookies and milk!! 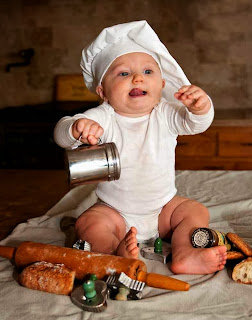 Finally ... our first smile!!!  Normally, this is the happiest baby I've ever seen.  He ALWAYS has a smile on his face ... except for today, when a stuffy nose had him stone faced and cranky.  I think this was image 251!!! 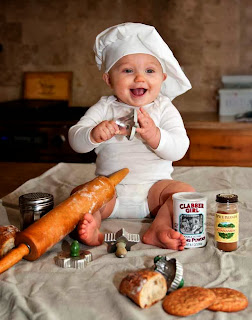 Patience is a virtue when photographing kids ... you just keep the camera ready and shoot LOTS of images.  With Nana close by squeaking toys and acting like a crazy woman, we finally achieved success two and a half hours later after three changes of clothes!!! 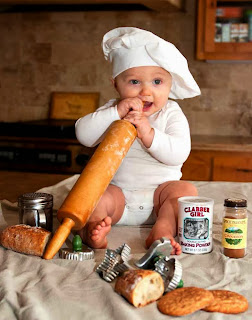 It turned out I had lots of good images to work with ... after taking 335 total!!!  The second half of the shoot ... yes we just kept on shooting another scene ... didn't turn out quite so well.  By now we have a tired, sleepy, cranky, hungry boy on our hands ... but that's tomorrow's story!!