It's been pretty quiet around Buzzards Roost!  I went from shorts one day to being in the deep freeze the next.   My trip to Las Vegas got cancelled when I saw 17 degrees and snow in Boron and Barstow.  Bad news for the citrus growers in the Bakersfield area.  The temps here have dipped below 30 for the last three nights and when my Weather app said it was hitting 21, I started blanketing my horse.  Every morning now I have to go out and crack the ice on his water trough. 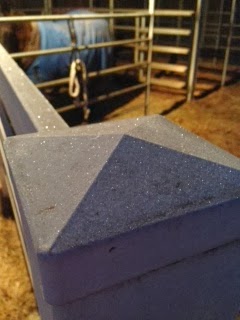 What happened to our seasons?  Summer, usually over in September when autumn arrives, lasted until the end of November.  I wore shorts for Thanksgiving!!!  Maybe we shouldn't have been wondering where winter was, because four short days later, we're buried in freezing temperatures that are causing severe damage.  The only good news is snow at higher elevations should be good for January skiing ... when I will be in Indio/Yuma/Quartzite.

I have to say that RV'ing has had it's secondary benefits.  Previously, I doubt I would have thought twice about cold weather, frozen pipes or ice damage.  Being much more aware of the freezing weather driving conditions and possible water pipe breakage on the rig, I've kept track of temperatures like never before.  Luckily I saw this one coming and was able to cover my well water lines and three pipes for outside faucets to keep from having a disaster like my neighbor.  Apparently that geyser a couple nights ago was due to a frozen water line.