Although I'm not really a hot chocolate kind of person, when Patty and I were in Costa Rica in the middle of their monsoon season where a torrential downpour soaked us to the bone ... we were treated to hot chocolate and snacks.  Yes it WAS 90 degrees, but the Eco-Lodge provided us with a wonderful HOT drink ...  cocoa.  It was the best I have EVER had.  Not the least bit bitter or grainy as some chocolate mixes ... and I didn't have to put twelve marshmellows in it to make it drinkable.

When we spied a bag that said "Cocoa" on it, we discovered through hand signals that this was the one we were loving ... AND it was "instant" cocoa!!!  I took a quick picture in the hopes I could find it for sale somewhere. 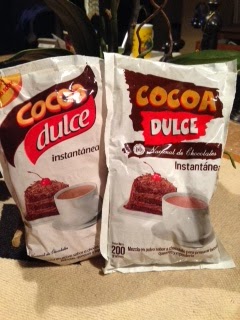 Back home, I hit the internet for a couple of hours before I finally found a company selling it.  Of course the Cocoa Dulce isn't expensive at all ... it was the shipping!!!  The breaking point was eight bags, so I placed the order and began the long wait.

I figured it would take awhile to get here.  At about the four week point, I gave up, figuring it was about time to call the credit card company, but got busy with other things.  Just before Christmas, I received a package ... totally beat up, written all over and fairly smashed.  The return address was Miami Florida.  Wasn't I surprised when I opened it to find a package within a package within a package again ... and it was my cocoa!!!  I fixed a cup immediately ... and it took me back to sitting on the dock, relaxing, soaking wet, eating a kind of hot pocket and cookies while swatting mosquitos as I tried to dry my camera.  Hmmmm memories!!  That scene will forever be burned in my mind every time I have a cup of wonderful Costa Rican hot chocolate.

It was then I realized ... Uh Oh ... I had ordered a huge box of small packages, full of mostly white powder from Costa Rica, close to the Nicaragua border ... and upon further inspection of the box, saw it had been opened and resealed more than once.  It didn't come through Dallas Texas as I expected ... it was sent through Miami Florida, probably on a slow boat!!!  I'm sure my name is now in some Federal database and I expect guys in Ninja outfits to show up at my door any time.  It's ok, I'll just invite them in for a cup of cocoa!!!
Posted by Nancy Kissack at 7:38 AM