That's what it took to get the rest of the shots of "B" ... LOTS of cookies and milk.  This image of him sitting on the Grizz I picked up in Alaska, was the happiest ... he was just up from a nap.  It was all downhill from here!! 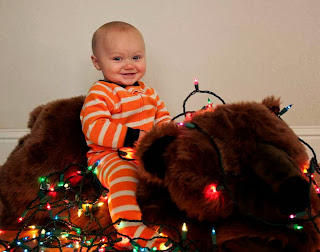 After the Chef pictures, we let him crawl around on the floor for awhile ... and boy is he fast!!!  On my hardwood floors, he squealed from one end of the house to the other!!  Realizing it was lunch time, we sat down for something orange and disgusting looking ... it's no wonder he wouldn't eat it!!  Especially when he had the taste of cookies all morning!!  Maybe the cloth bag full of diapers will keep his interest.  It worked really well .. he was laughing ... but I don't think this is what his Mom had in mind. 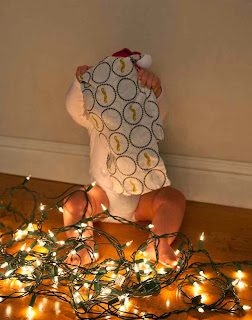 Another hour passed and I actually got a couple useable images ... no smile however!!  This is what Mom was looking for ... black and white with the red hat.  This image can be created in a flash on your iPhone ... but it took some time in Photoshop to scrub out that Santa Hat. 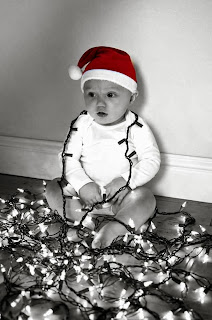 More cookies ... you can tell how good they are working now!!  In between every take we let him wander around ... he smiles ...  we sit him back down and this is the result!! 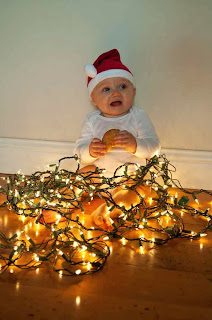 Finally, having tried a bottle of hand lotion, his bottle of milk, cookies, diaper bag, dog toys and wrapping paper, I suggested we put the cookie UNDER the lights.  Laying on the floor, I snapped a couple of quick ones as he crawled toward me looking for it!!  You've got to be inventive with babies!!!! 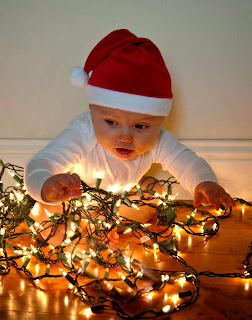 Nana was over my shoulder squeaking the dog toy and waving his bottle for this one.  By now, it's his nap time and he's had about enough of this nonsense!! 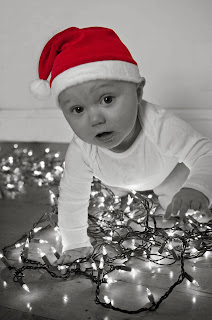 I decided this about the best we were going to do ... I had at least 5 images for Mom ... not EXACTLY the one she was looking for, but with a tired, hungry, snuffy baby, I didn't think we were going to get any better. 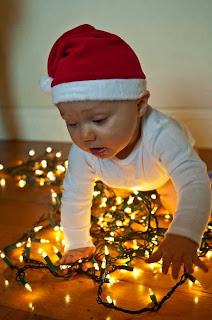 Five hours later, it was time to hang up the camera.  Just like Santa, "B" was full of cookies and milk and ready for a long nap.  As soon as I put him in the car seat, he was out like a light!!  This model business is just too strenuous!!! 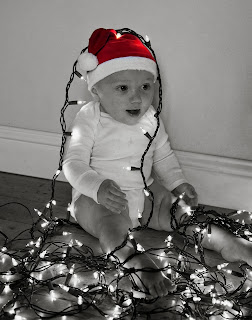 The good news is that Mom was thrilled with the images.  As for "Kid Photography" ... be inventive ... be PATIENT!!!  And if that doesn't work ... you just have to try again!!