I was up frightfully early after having spent the night trying to get meteor shower images.   That wasn't good since I really needed the rest in order to stay up late playing poker.  Not that the games run late ... we are a bunch of old folks from the hood that seem to hit the sack by 8:30.

I finally decided to finish up the painting that was started in June of 2017.  I don't know why the painters chose not to paint this lovely pinkish door.  This was the main color of the open floor plan kitchen/family room, along with a lovely shade of bright turquoise.

You can tell from my quilts that I like bright colors, but not on my walls.  I think it took all of 30 minutes to make it disappear. 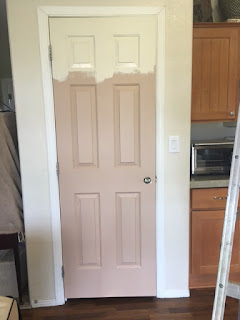 VOILA!!!  No more pinkish brown door.  Feeling accomplished, I tried to reattach the door handle I removed.  That feeling disappeared in a flash as it took another 30 minutes to figure out how to get it back on.  What a difference a little paint makes. 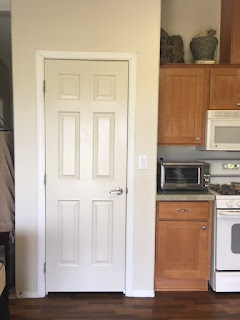 I tried to nap here and there, but my brain wouldn't let me.  I kept thinking about the appetizer I decided to take.  I didn't need to, since there were about 23 people this time, meaning there wasn't even enough room on the counter.

I cut up smoked sausage, placed a piece of pineapple on each one and stuck it with a wet toothpick.  Wet because if you don't soak them, they will catch fire in the oven.  I even remembered to get the natural colored ones so they didn't turn pink and blue.  A quick dip in teriyaki sauce and into the oven they went.

I only had to douse the flames on one as I removed them from the oven and headed out the door.

The host family (with the most tables and chairs) supplies the main course.  In this case it was smoked brisket.  The players bring everything else.  You never know if you're going to have six potato salads or four pots of beans.

I whipped up my specialty ... Caesar Salad ... straight from the package it comes in.  I threw in a little more parmesan cheese and croutons, since they seem to be rather stingy with those ingredients.

There were lots of new faces as we sat down to play.  I'm not the best poker player, mostly because I only know how to play 5 card stud.  With a buy-in of $5.00 each, I tend to lose every time, but it's worth the fun and meeting new people.

There were games like Woolworths, Baseball, Follow the Queen, Low Hold Spade ... I've never heard of so many different ways to lose your money.  With seven playing at our table, I lost pretty quickly.  Finally a winning hand ..... 5 Kings.  Don't ask me what game caused that, because I don't know.

Another hand I won was where One-eyed Jacks and the Suicide King were wild.  What??  A Suicide King?   Who knew there's a King trying to kill himself??

Halfway through the night, the wind came up and the wildest storm yet hit the mountainside.  I bet we got three inches of rain in about 45 minutes.  Thunder and lightning was directly overhead.  When I got home, there were some big rocks in my driveway, having been washed off the hill above and two scared puppies in bathroom jail.

Luckily the motorhome was still intact, but my patio rug apparently became a flying carpet.  It was one of those horizontal rains.  The good news is it's 69 degrees this morning ... downright cold!!  It also has delayed the trains.  Seems they shut the tracks down during and after a storm like that until they run a check with their pickup truck looking for washouts.  I slept like a log.

Today I'm off to do a little sewing with the quilt group and contact my awning guy.  He said three weeks ... and guess what, it's been three weeks.