They come in the middle of the night and steal from you without you ever knowing. I've had several versions of wireless internet, from Sprint to AT&T to Verizon.  I NEVER use anyone else's WiFi.  If mine doesn't have a signal in the location I'm at, I jump in the Jeep and drive to where it does have one.

My devices have always had crazy long and complicated passwords, so I never really worried ... or checked ... to see if anyone was stealing my air time.

Wasn't I surprised to find out yesterday that someone had hacked my JetPack and was using my data at MY expense.  When I tried to log on to my account to see what was going on, it wouldn't let me in.  It was completely locked up since someone had been trying to access it so many times.  Funny thing is, that was probably the easiest password I had.

I rarely use more than 3 or 4 gigabytes of data.  In a matter of four short days, they were up to 9 GB.  Since it was so early in the morning, I chose the CHAT option.  I explained everything as I was trying to log on to my Verizon account.

When I was finally granted access, it was sheer luck that I had all the required passwords with me to change everything on the account and the JetPack.  They have charged me $45 overage fees, which they say can be reversed as soon as the cycle ends, which is today.

It took 90 minutes on the computer chat to get that noted on my account.  Now to figure out how they did it.  I never open anything from anyone I don't know, nor do I click on pop-ups.  I always close everything down, then go back online to the stated website.  10 times out of 10, it has been a scam of some sort.  This one is puzzling however.  I'm thinking they did it through my computer, but I'm not sure how.

From now on I will have to verify my data usage every couple of days, which I used to be able to do on the unit itself.  It seems Verizon has figured out a way to make you buy new WiFi units.  The device I have shows my data usage ... or at least it USED to.  They are not providing that information any more on the old devices so you will buy a new one where it DOES show up.

The alternative is to log in to your account to be able to check.  It's a pain, but I'm stubborn.  This JetPack works just fine .. why do I need to buy another one?

With that done and still irritated over the upcoming conversation to get my $45 back, I checked on my water bill.  Good grief ... it's STILL over the moon.  I wonder if another valve got stuck?  I grabbed my channel lock pliers and headed out to clean every one.  I turned the entire system OFF.  Sorry grass, you're out of luck.

I only got as far as the first one.  As my luck would have it, the anti-siphon side (whatever that is) wouldn't come off.  In frustration, I grabbed the wrong area and twisted the top right off, leaving a gaping hole.  Rats and double rats!!!!  Now I have to buy a whole new assembly just to get the cap.

Off to Home Depot I drove, where I located the Lawn Genie valve for $13.00.  Taking THAT top piece off wasn't as easy, but at least I didn't grab the wrong area and break anything.  I'll plug up that hole in my finger later. 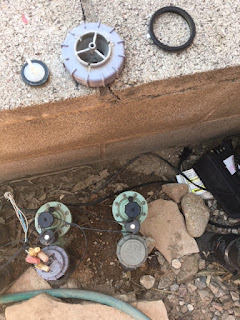 Lucky for me, it fit perfectly and doesn't leak at all, not to mention it is now squeaky clean.  I took the rest of the valve and went to put it in the little cabinet in the garage.  WHAT???  There's another Lawn Genie box sitting right there with a complete valve in it.  I didn't need to make that hour's trip to Home Depot after all!!  At least I have TWO should something break!

It was so hot I couldn't stand another minute outside, so each day I'll clean one valve.  In the meantime, I'm hoping it rains because I'm NOT turning the water back on.

Naturally, the most expensive thing about living in the desert is the water.  It actually costs as much as running my air conditioning all day long.  Weird, right?  You're not in California any more Toto!