Strike While The Iron Is Hot

The mornings have been wonderful.  Cool and breezy ... perfect for lawn mowing.  I'm not really sure how my neighbors feel about that, but I wanted to strike while the iron was hot ... or cold actually.  I was done by 6:30.  I spent the next 30 minutes chopping and hacking bushes that are choking out my cactus.

Following that was another 30 minutes of repairing the drip lines I chopped by accident, shooting a stream of water directly into my face because they were ON.  Drip lines should be on the ground ... not hanging throughout the bushes!!  Then I ran drip to my three yucca plants that are looking pretty sad.  I'm not sure they are going to make it.  By 7:30 I was done. 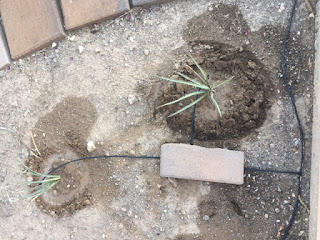 Time to finish up all those lightning images.  Only this time I didn't get many.  What I DID get are pretty amazing, if you ask me.  I never knew lighting could strike like this. 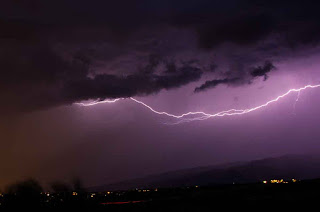 Unfortunately, this storm was too far away and around the corner to get lots of images.  These are the only two out of twenty pictures worth showing.  I love the purple colors ... that's a first also.  Just mother nature doing her thing! 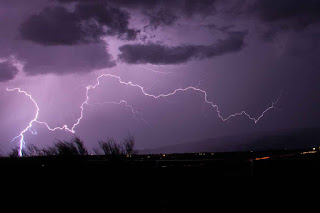 I'm happy to report Mr. Cooper is on the mend.  The rice/potato/chicken mixture worked it's magic.  Thank you readers for the suggestions to make life easier if I have to keep this up.  Hopefully I'll find something in a can that his discerning persnickety palate will enjoy.

I did use a rotisserie chicken that I found at Safeway for the same price as the raw ones.  ???   He chomped down the mixture in a flash, making sure Miss Jessie didn't get any.  I figured to strike while the iron was hot also.  Since I was already cooking, I might as well cook something for me!!

S'mores rice crispy treats!  Just stir in honey graham cereal, chocolate chips and mini marshmallows to the normal recipe.  That didn't work out so well because even though they were last, the chocolate chips half melted.  Still, they tasted WONDERFUL ... and just like s'mores.

They tasted a little too good and I ate three of them.  They reminded me at midnight that I had done a dumb thing as my stomach felt like I was wringing out a washcloth.  Okay ... okay ... I got the message.  Maybe I should have had some of Cooper's dinner instead. 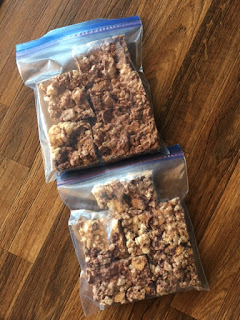 I would love to relay my last story of the day, but I can't read my writing.  Something about gants deanrdbks.  Oh Wait!!!  I just got it!!  The Giants and Diamondbacks baseball games!!

The Diamondbacks are in first place in the league.  We aren't in last, but we have had too many injuries this year and have been playing terribly.  Amazingly, the Giants have been striking while the iron is hot .... they have WON their first two games against the Diamondbacks with one more to go.

It was a hard decision to pick between the two teams, but I have to cheer for the Giants since they are so far behind in the championship race.

The last bit of sad news ... another burial is imminent.  Alas, my Garmin watch has died twice more.  The internet says to update it with my computer, which brings up another recent problem.  I'm outdated.  They say I've been outdated for two years now, but we all know it's more like five years.  We'll discuss it later on.