So much has been going on with the rain, that I haven't had time to catch up on the critters and quilts. Happily, these are the critters I LIKE to see around my house.  I'm sorry to say Miss Dove seems to be a hussy.

This is her and husband number one as they swapped places on and off.  There was always ONE of them on the nest.  Next thing I know, there's a milkman at the back door whispering sweet nothings in her ear.

In no time, she packed her bags and flew the coop.  Apparently divorce was in the air.  I tried to check out the nest, but those palm fronds have big pointy things that get stuck in your hair.  The honeymoon with her new man was short and sweet.  Two days later, she was back on the nest with hubby number two. 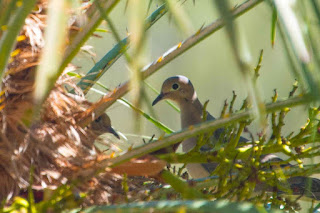 I was not so lucky with the quail.  One by one, every baby disappeared, as did Mom and Dad.  Haven't seen hide nor hair of them in about four days, but several other families seem to roam about the desert below the water station. 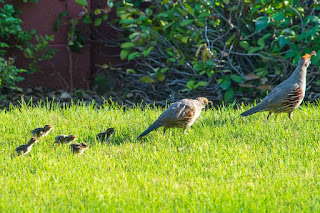 The big rains have brought cooler weather, if 90 can be considered cooler.  I've been trying to limit my trips to town and work on a couple of quilts instead.  Here's the basics of the Quilt Block Challenge.  It really doesn't look anything like this in person.  For some reason, the camera can't pick up the pretty colors.  I should have it finished soon. 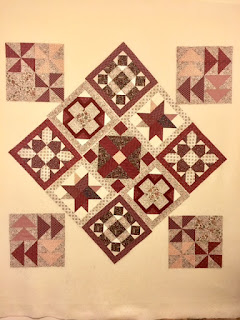 In the meantime, tired of sewing and in need of a break from Cooper's ball throwing game, I was impressed with a video by a very talented cook.  She had a recipe for microwave carrot cake.  Bakes in 4 minutes.  I just had a feeling this would be a bust, but she made it look so darn good, how could I resist?

Baked in silicone cake pans (all three layers one at a time), the first one seemed to boil all over the top of the pan, then came in for a crash landing.  It was supposed to be dry on top.  I cooked it for another minute.  Then I cooked it for ANOTHER minute.

The second layer didn't take as long, but the results were just the same.  There was a dent in the top big enough for a swimming pool!  Third times a charm, because the third layer came out the best of all.  This is it.  Still a pretty big dip in the middle, but frosting will fill that in just fine. 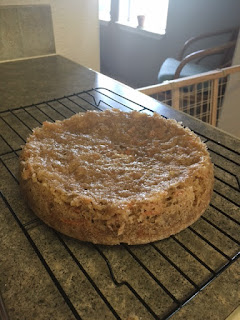 I have to say her cream cheese frosting recipe is the best I've ever tasted.  How can you go wrong with five cups of delicious sugar filling in all those craters?

Well the first problem was that it required a steak knife to cut through the hard as a rock exterior.  It's okay I said ... anything with that much frosting will be just delicious.  I would be wrong.  Every bite was tough as could be.  By the fourth bite, having consumed half a cup of the white gooey stuff, I was sick as could be.  I can't believe I'm saying this, but it became the second burial in Arizona.  What a waste .... but believe me, you would NOT have eaten it either. 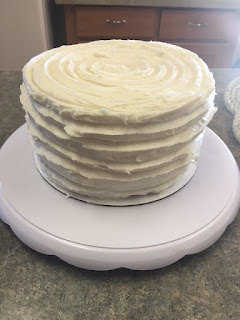 In other news, I checked out the motorhome to find an entire family of bunnies living underneath.  Apparently they like the cool shade.  All that rain has done zero damage to the RV pad with only some settling on one side.

The driveway needs a little work since that's where all the critter holes and habitats are, causing some erosion.  Considering the amount of rain that came down, I think I'm in like Flynn. 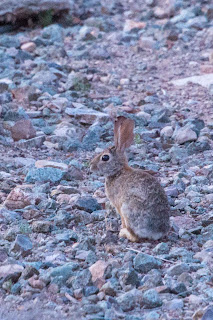 My bike sits forlornly in the garage.  There will be no riding in either the rain or the heat.  All dressed up and nowhere to go! 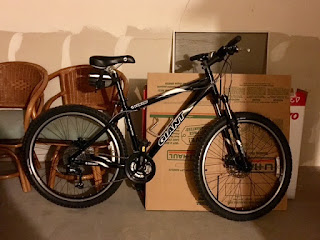 Remember that light bulb that fell from the ceiling?  Turns out the bulb itself broke, who knows why, and fell to the floor while the base remained intact in the ceiling fan fixture.  In fact, I now have TWO like that.  How in the world do I get the bases out without electrocuting myself?

One of the more knowledgable guys at Lowes said to get a potato and stick it in the socket, then turn it to remove the base.  Somehow I don't see that working for me.  Maybe Nick and Miss Terry will read this one and give me some suggestions.  If there's one thing Nick knows, it's electricity.  No really, he DOES!!!  They completely rebuilt four garage lights for me and installed a timer, for which I will always be thankful.

Todays project, head back to Lowes for some pavers ... I'm making a walkway ... and mow the lawn.  How fun!!!  I did look around for some adventures, but apparently they close down during the hot summer months.  Time to find a Plan B.