In spite of staying up late last night and playing the ball game with Cooper in an attempt to get him to sleep in ..... he didn't.  I figured to catch a snap in the afternoon, but that didn't happen either.

Up bright and early, Miss Patty and I trucked on off to downtown Tucson.  First stop ... the Jeep Store for windshield wipers.  I only went to the Jeep dealer because I loved the look of the ones I had, but they didn't seem to have anything similar.

With all the rainstorms, I really needed wipers.  The nice kid not only put them on, but showed me how.  I already knew since Mr. Chance had helped me the day before, but it was nice of the guy to help.  Besides, he was rather cute!!

Five stops later, we made it to the Adobe House Antique store.  At least I never have to go back now because it's prices were through the roof.  A few more stops and we landed back home, just in time for a rain storm.  I never even got to use the wipers.

Although it was a rather cool day in Tucson, 80 degrees I think, storm clouds came over the horizon about 5:00.  I seem to be drawn to the lightning like a moth to a flame.  I can't stand not trying to capture it. 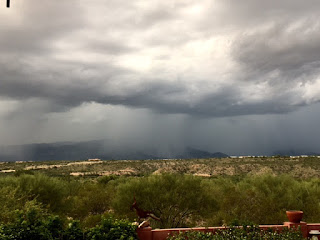 These were all taken with my iPhone.  You know, the one who recently stated I have been using too many gigabytes of cell data?  I have an unlimited plan so they can't stop me, but they CAN and DID start charging me another $5 a month.  Stinkers!!! 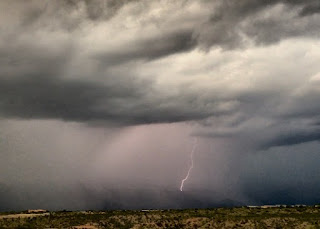 The clouds got pretty black across the wash as lightning flashed every few seconds and rain fell in torrents. 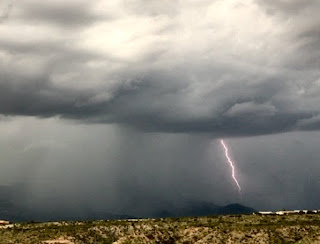 There would be flashes clear up in the clouds, then a big strike to the ground. 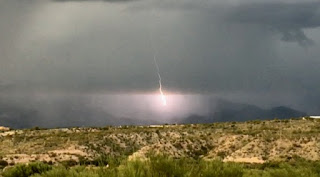 Even this far away, they were almost blinding.  You know those scary movies where you say "don't go outside!!!" or "don't go in the cellar, you dummy!!" but they do anyway?  Well don't go outside in a lightning storm ..... but I did anyway. 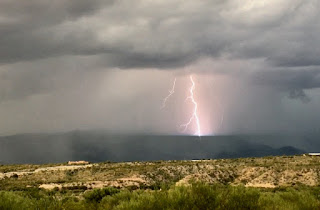 As darkness began to fall, my iPhone began picking up the pink flashes reflected in the rain.  Not your normal lightning strike, this one looked like four at once.

Cool stuff ...... I sat and watched as long as I could before heading inside to find Miss Jessie an unhappy camper.  The thunder was barely audible, but that would soon change. 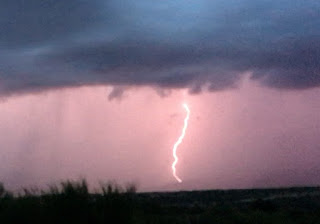 Another storm right on the heels of this one brought out my big guns camera.  I know I probably shouldn't go outside with a tripod, but just like the dumb blond who went down in the basement, I went outside and set up.

One really pretty aspect of all this rain is my newly planted bush blooming like crazy.  The three little yucca I planted are still alive too, so I have hope they will survive. 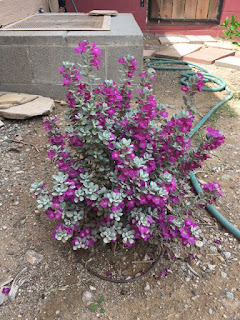 In the midst of all that, I noticed my watch had died.  It's what I time my exposures with, so panic mode set in.  It's a huge GPS watch for running that I've worn for many years.  I just replaced the ugly red band with a black beauty and now it's going to die? 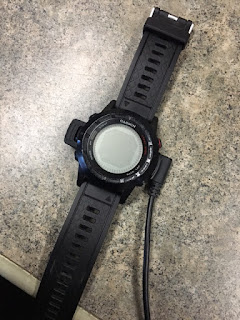 Surprise!!!  After finding hard reset instructions on the internet, I'm happy to report it's up and running ... hopefully for another ten years!!

I'll process those lightning images today, but don't expect much.  The storm had passed before I got set up.  The final result?  It's downright cold at 68 degrees this morning.  It's going to hurt when it actually DOES get down in to the 30's this winter!!