What Was I Thinking!!!

Back when I first arrived in Arizona, the temperatures were killer.  They still are, but that's beside the point.  I had read about using Reflectix, a kind of bubblewrap covered in aluminum foil, inside the cupboards to help keep the motorhome both cool in the summer and warm in the winter.

It sounded like a great idea to me, since there have been times when the heat is just too much for the AC unit.  As bad as I sleep, running the air conditioner all night long would result in a Zombie of epic proportions.

When I went to Ace Hardware, I expected to find small sheets I could cut to fit.  Instead, I purchased the only thing they had ... a 50 foot roll.  If it works in the motorhome, it might work here at the house in those Southern exposure windows.

A few days ago, as I was sitting on the couch contemplating the carpet, I decided the time had come.  I grabbed my trusty tape measure, a pair of scissors and the mega roll, went in the motorhome and turned the AC on.  In was 3:00 in the afternoon.

In a matter of three minutes I was dripping wet with sweat.  What was I thinking?  It was so hot inside it didn't even register on the thermostat!!  I quickly removed everything from the cupboards.

They said if you cut it half an inch bigger, you could push it in to the space and it would stay.  By golly they were right!  I was so excited that it worked!!  Some of my cutting wasn't exactly straight, but who's going to see it but me?  Here's the long side over Jonathan's cage. 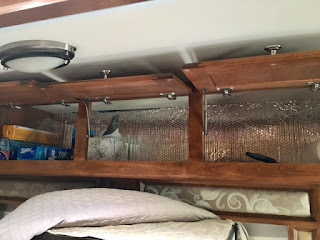 It was probably 120 degrees as I cleaned out the opposite side and began pushing the reflectix into position.  This is just SO cool!  What a great idea.  I even placed a huge piece behind the couch.  I taped some of the leftover pieces together with gorilla tape (everyone should have a gorilla in their motorhome) and stuffed those into the ceiling vents to block the sun, as well as over the shower. 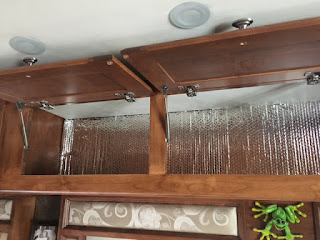 By the time I was done, I was wringing wet.  I slugged down three bottles of water before taking a nice long cold shower.  Next time I'll do that kind of work in the morning when it's cooler.

With half a roll left, I cut two big pieces for the bedroom windows, resting them on the window sills behind the blinds.  If I remember right, Miss Terry told me not to attach them directly to the windows because it will create so much heat on the glass it can damage the windows.

I'm becoming the Queen of Reflectix, putting it everywhere there's a window I don't want to look out.    By the way, that big roll was around $50.  Worth every penny!!

If you've been a blog reader for awhile, you also know about my knitting adventures.  Barbara Westerfield is the Knitting Queen the West.  She can knit a sweater while Tom drives from one RV park to the next.  While on our trip, she helped me tremendously, but honestly, I have no talent for knitting.

Every day Tom would ask how my project was going and I would have to tell him I tore it all out and started over.  Really .... like ten times until I finally just gave up.  I never could seem to get the count right, and I dropped stitches right and left.  I wanted to knit so bad, but I just couldn't seem to get it down.

FINALLY I found my knitting karma and figured out how to make those beautiful socks and slippers I see people wearing.  This one's for you Barbara! 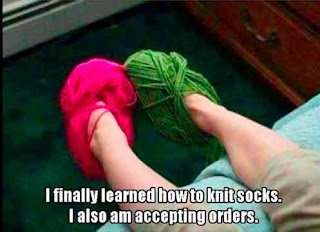 In other exciting news, I finished this epic bedspread for my Arizona bedroom.  You're right, those greenish pillow shams don't exactly go with the beautiful turquoise, and of course I can't get any more of this material.  RATS!!!  I'll have to come up with something that matches a little better. 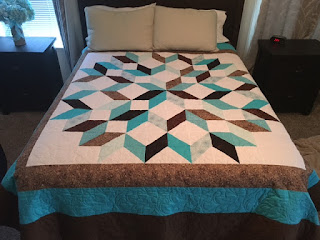 Today's goal is again fighting with Amazon over a shipment that was due at my house yesterday.  Even though they promised me everything would be sent via UPS, they used the post office, who sent my new watchband to the wrong postal facility, somewhere North of Phoenix.  Then it's on to Harbor Freight who can't seem to find my solar rope lights I ordered two weeks ago.

It used to be such a cool thing to order stuff on the internet and have it shipped right to your house in a matter of days.  Now it just seems to be a hassle every single time.  Wish me luck ... I'm also about to check my data usage.  I'm keeping my fingers crossed.