Transplanting With My Black Thumb

I went outside yesterday to discover I was very lonely.  All those plants I talk to in the morning were back home at the Chance residence.  All those that lived anyway.  Maybe I could get a few of my own.  Maybe I could just transplant a few to the garden.

Speaking of the heat, a thread that seems to be running through all my posts, I was tired of watching the Giants baseball team lose, so I decided it wasn't all that hot after all and grabbed my shovel for a little planting.

It was 2:00 in the afternoon and 95 degrees as I slugged down the first bottle of water.  Out into the wilderness I trod, looking for the perfect garden piece.  I picked a beauty and started to dig.  Definitely not as easy as I had imagined.

Okay, forget that one, it's not coming out.  I looked for a smaller one.  Good grief Charlie Brown, these guys just don't want to come visit with me.  Finally, I found the tiniest piece of flora and dug it up, only to find it had a root two inches around and ten inches long.

Surprisingly, these desert yucca have a rhizome (I think that's what you call it), kind of like my plants at home.  A huge root grows underground, shooting up little plants called pups.   Finally .... success.  That's one.  I scouted around for two more, even smaller ones. 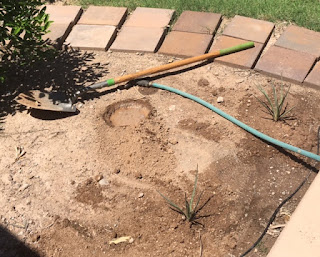 I quickly realized I was too hot.  I already run hotter than most due to a short session of heat stroke many moons ago.  While watching a ballgame, I became rather sick, so I walked upstairs to the shade and sat down.  Instantly, I felt better.  Too bad I didn't express that because someone called the cops on me.

In a flash, I was practically handcuffed as they hauled me off to the medic room jail.  WAIT ... I'm FINE!!  Nope ... they plopped me down on a bench and threw a bag of ice on my neck.  "You're not going anywhere".  While I have to admit the ice felt good, I really thought I was taking up space from someone who might REALLY be sick.  They refused to let me go.

Ten minutes later when the medics back was turned, I initiated a jail break and disappeared into the crowd.  I'm pretty sure that's why I run a little hot, so I'm always careful.  Back at the house after my hunting expedition, I drank another bottle of water.

Then I began the dig.  I instantly became aware of how the adobe houses remain intact after so many years.  This stuff truly is like concrete.  I scratched around the surface, then dumped water in the hole to soften the dirt.  Eventually I was able to dig down far enough to get three little plants in place.

I don't know if they will survive or not, but at least I gave it a shot.  They tell me anything will grow if you give it water.  I drank two more bottles as I surveyed my handiwork.

When I finally looked up, I was met with this crazy cloud formation.  What do you see?  First I thought it looked like a mushroom cloud ... then I spotted a duck with a crazy eye and wild hair.  Although the forecast was for sunny and hot skies, it has changed to rain on and off every day all week.  YAY ... we like the rain!! 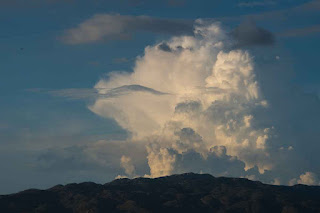 NOW would be a good time to plant a few more cactus in my yard, but the thrift stores are calling my name.  Jessie needs an ottoman at the foot of my bed so she won't hurt herself getting down.  Luckily, it's right on the way to Civano Nursery full of magnificent plants and hopefully a hummingbird feeder since mine has decided to leak out it's contents all over the patio ... three times now.