I've got lots of Patagonia wear ... jackets, running gear ... so when Patty said lets go to Patagonia, I quickly ran through my brain what articles of clothing I still needed to acquire.  Unfortunately, Patagonia doesn't live in Patagonia.

It definitely was a beautiful drive with the Arizona desert green from all the rain.  The first sight was this very cool cutout statue against the horizon.  You might not know just how realistic looking this statue is, but I can tell you it is exactly what you would see when a cowboy drives cattle ... from the horse's low head, reins dangling, to the horseman's hands, to the calf falling behind mom. 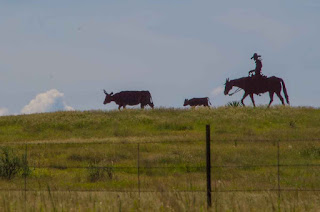 This is actually in Sonoita, on the way to Patagonia.  If you look up Sonoita on the internet, it says it's a town.  That's about it.

A few more miles down the road and you come to Patagonia.  Originally, the Papago Indians lived here under constant threat of Apache attacks, mostly for food.  Eventually this led to the military presence to keep order.

Unfortunately, Civil War broke out in 1861 and the troops were sent back East.  The Apaches continued their depredation, killing several local miners.  In 1865 the war was over and the troops came back to set up Camp Crittenden. 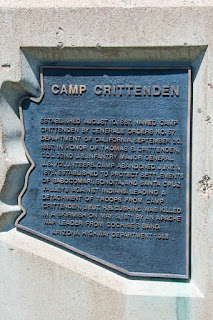 In 1891, Civil War Veteran RR Richardson developed an area of his ranch near the railroad, which became Patagonia. This was a supply center for the mining camps in the area.  Trains came in from Tombstone and went all the way to Sierra Vista and Mexico for supplies.

By 1900 Patagonia's claim to fame was running water and three hotels.  This is the Commercial Hotel. 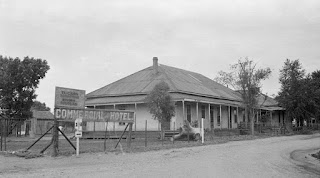 All this history made us hungry, so we stopped in at the Stage Stop Inn for some lunch. 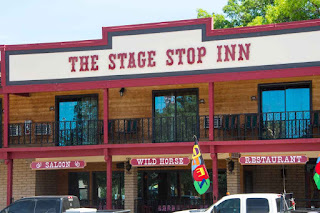 This quiet little hotel has a great restaurant and a pool in case you are interested in staying.  Mr. Chance had an amazing looking cheeseburger while Patty and I split a turkey wrap. 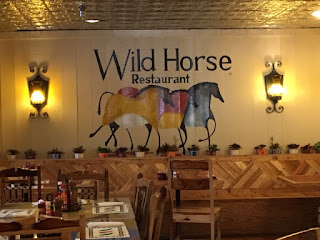 Their onion rings are WONDERFUL.  Have two orders!!  We actually ate most of the onion rings before I took a picture!! 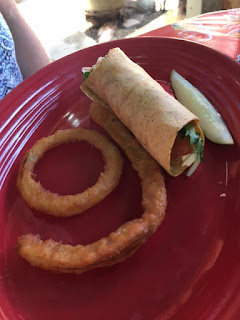 By the 1920's, the stock market crash was quickly followed by a Sonoita Creek washout with the railroad abandoning the tracks heading to Sierra Vista and Mexico.  In the late 30's, big mines came in sending copper and zinc to allied forces in World War II.  Otherwise, the little town might not exist any more.

We wandered through the lobby of the Stage Stop Inn to find some unique furniture and flooring. 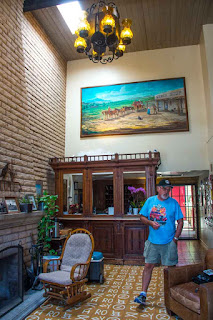 There were many chairs made from cattle horns and hides.  The interesting part however is the floor.  They have tiles imprinted with local cattle brands.  That's something I've never seen before. 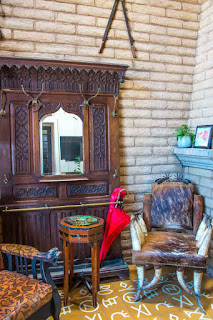 Across the street is the old railroad station, moved here from the OTHER side of the street in order to save it from destruction. 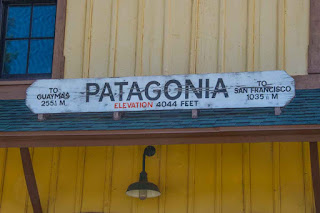 It is now Patagonia's municipal court.  See the old wig-wag on the far right?  It's one of only a few in existence, so they refurbished it and installed it here.  There are lots of stories if you go inside, but you can also find stories outside. 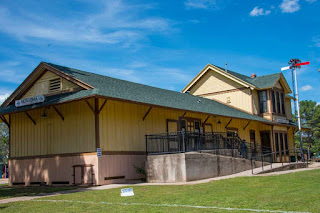 Not sure how we ended up talking to this guy .... I was taking baby bird pictures (to be seen later) when the conversation began.  Apparently he is walking the Arizona Trail from Mexico to somewhere in Northern Arizona.

He looked rather beat up and hot.  I'm not sure walking this trail in the summer is the thing to do, but anyway, he began to tell us the tale of the HUGE mountain lion that jumped over his shoulder not far from here.  He is either lucky to be alive or a real good story teller!! 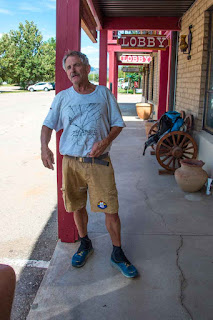 There's much more to see in Patagonia, as it has become sort of an arts and crafts town with quirky people, which is how they like it.  On the way back through Sonoita, we discovered this new enterprise.  I'm not sure it will survive, but the newly built Copper Brothel Brewery (yes you read that right) just opened for business.  It will probably be hopping in the wintertime.  Ladies, you may want to accompany your husbands to this one. 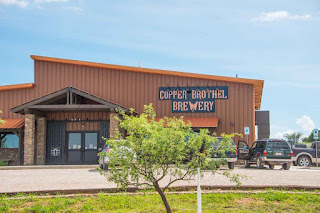 When people saw my camera, they asked if I was here bird watching.  Uh no ... I hadn't actually seen any birds until outside the restaurant.  There above us were several starling nests ... least I'm guessing that what they were ... attached to the fire sprinkler valves.  I took dozens of images I'll show you tomorrow.  Cute little buggers!!

Lastly, I'm happy to say Cooper and Jessie are up and running again.  Now to find something in a can they will eat without bad consequences.  I'm terrible at cooking for myself ... if I have to cook for them, I'm sure my cemetery will exceed it's boundaries.